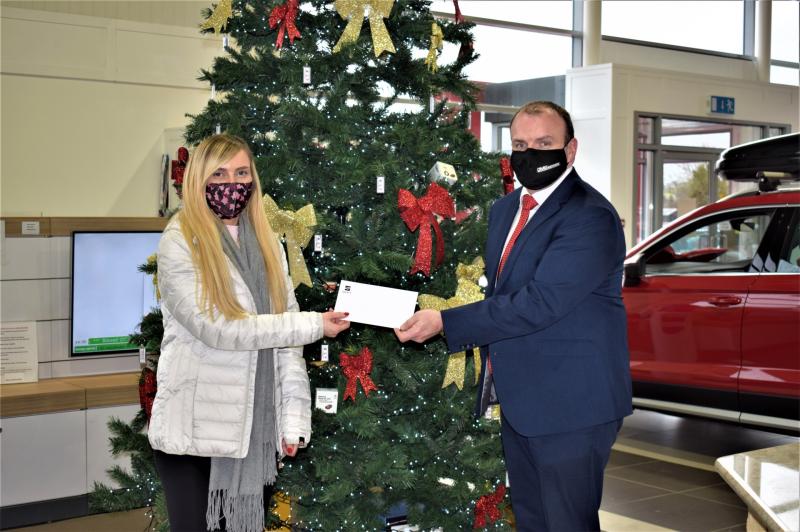 There were celebrations in Convoy and Donegal Town as a woman won back the cost of her car from DMG Motors.Chloe Campbell from Convoy was thrilled to win the competition run by DMG Motors where anyone who bought a used car was entered into a draw to win back what they paid.
Ms Campbell bought her Seat Leon earlier this year and had all but forgotten about the competition.
“I was surprised and delighted to get the news,” she said.
“I saw a load of missed calls and was afraid something was wrong. I couldn’t believe it when I found out that I had won.”
The lucky winner came to DMG Motors on Monday to pick up her cheque. DMG Motors manager Stephen McCaul said it was lovely to be able to present her with the cheque so close to Christmas.“The draw was originally going to be in May but with us being closed because of Covid we ran it a bit longer,” he said.
“It’s really nice the way it worked out, to be presenting the cheque to Chloe now at Christmas. It's been a tough year for everybody so this is a great boost.”This is the first time that DMG Motors have run this competition where anyone who bought a used car was entered into a draw to win back what they paid. More than 435 entries were received over the year.
“We have to make a decision now on whether we will run it again,” said Mr McCaul.
“We are very pleased with how it went, especially for the year that was in it.
“This is a nice way to win your car. It is not just a case of giving a car away in a raffle to someone who might not necessarily have been looking for one. People who entered this were thinking about buying a car anyway so it gave them an incentive to push it up their shopping list a bit.”
People from all over the country bought used cars at DMG Motors.
“We would have been happy for any customer to win but it is really nice to give it to someone local,” said Mr McCaul.
This was Ms Campbell’s first purchase from DMG Motors but her father has been a loyal customer for many years.
“When I was buying a car, my father suggested that I look here,” said Ms Campbell. “I’m glad I listened to him!”
More information on new and used cars at DMG Motors Ltd can be found at dmgmotors.ie and on the Facebook page DMG Motors.