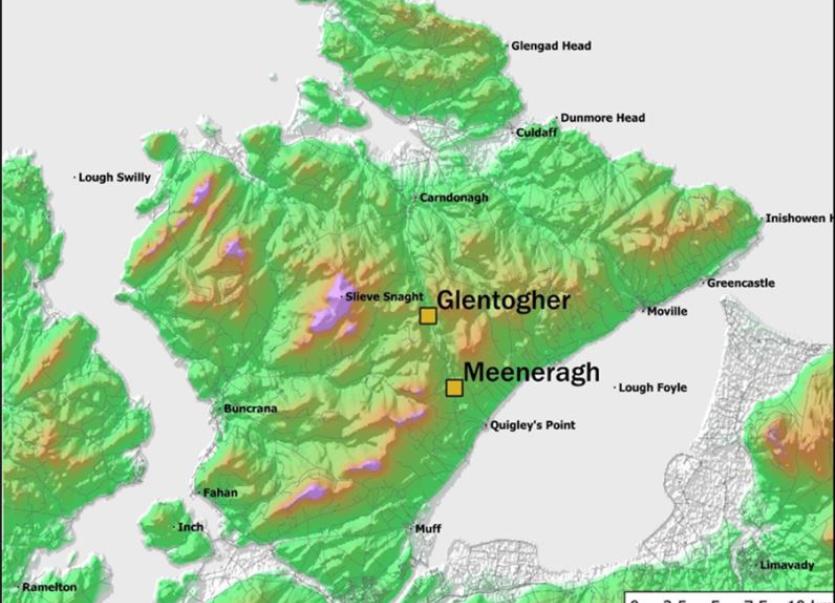 The areas for the proposed prospecting in Inishowen

A new environmental group in Inishowen has warned that a potential gold mine in the peninsula could cause irreversible damage to the local area and only provide a couple of jobs locally.

The prospecting with a view to mining is being carried out in the northern end of the peninsula by Arkle Resources, a mining company who have been active on and off in the area since 2016.

It is understood that the results so far are so good that the company intends to start drilling to locate new gold veins in 2021 Their current prospecting licenses are up also up for renewal in the spring of 2021.

Now however locals, under the guise of Inishowen Against Gold Mining, are coming together to oppose any further development.

Arkle Resources are not the first prospectors in the area but they are certainly the most active. The area in question is an area between Meeneragh and Glentogher.

Historically there has been considerable concern and active opposition from residents to the prospecting and the obvious intention to mine inherent in such prospecting.

A recent statement by the company on its website and in an article in a national newspaper is, according to the new group, "disturbing" as it reveals they have already begun trenching.

The group say it is delighted to have the solidarity and support of the Tyrone group, the Save Our Sperrins campaign. Arkle Resources makes reference to the link geologically between the two areas, Inishowen and the Sperrins, in the context of gold deposits.

However, while the company apparently view any operation in Inishowen through the lens of company profit, the new local group say they view it through the lens of the exploitation and so-called justified ecological destruction of an extraordinary and unique beauty, huge biodiversity significance and overall community well-being.

"We are in a time of climate and biodiversity emergency. An era of mass extinction. This is not scare-mongering or wild assumptions, this is scientific fact.

"Extractive industries, such as gold -mining have contributed massively to this situation as well as causing direct and horrendous damage to human and other animal life through the toxic cocktail of chemicals used in the operations.

"Gold mining is about large profits for a very few with irreparable losses to the many. Gold is not something we are short of and according to the gold industry itself there already is enough gold to meet industrial demands for another 222.6 years.

"However we do need clean air, clean water, uncontaminated soil and biodiversity. We have no choice therefore but to oppose any activities related to mining " a spokesperson said.

In its information section on the company webpage, Arkle Resources detail the extent of its operation to date.

"Initial drilling success was achieved in 2016, Arkle Resources being the first company known to drill specifically for gold in the area. Drilling at the Meeneragh prospect gave intercepts of 3.05m grading at 5.8g/t gold and 4.82m at 5.48g/t gold.

"Drill targets were selected at the Meeneragh prospect and two phases of initial drilling were completed in 2016, which identified a series of parallel gold bearing veins. Five additional drill holes were completed in October 2017 in order to better understand the orientation of the high grade veins intercepted in 2016 and to locate further veins noted in historic exploration, lying to the south.

"The 2017 drilling has identified further narrow quartz veins in the vicinity of the high-grade intersection in 16-MR-07 and 16-MR-07 drilled in 2016. To date, a total of 1113m has been drilled on twelve holes.

"The focus of the project has recently shifted to targets along the Glentogher Fault which runs between the Meeneragh discovery site and the early 1900s Glentogher base metal mine. Fieldwork has identified a previously unknown shear zone (Kinnagoe Shear Zone) which intersects the Glentogher Fault 3kms northwest of Meeneragh.

In an article in the Irish Times recently the company
revealed that a total of eight trenching locations have been identified from the recent soil sampling survey at the Donegal project.

Arkle also said re-analysis of a visible gold sample from the Mine River project identified a higher grade sample, compared with the earlier analysis.

“The objective is to locate new gold veins,” said John Teeling, chairman. “There is further good news from our Mine River gold project as more detailed analysis from the recent trenching programme has increased the grade of a significant sample from 5.5grams/tonne to an average of 6.39g/t gold on 30g and 50g representative crushed samples. The next step, in early 2021, is drilling on both projects.”