"So far we have missed all of the Covid madness" 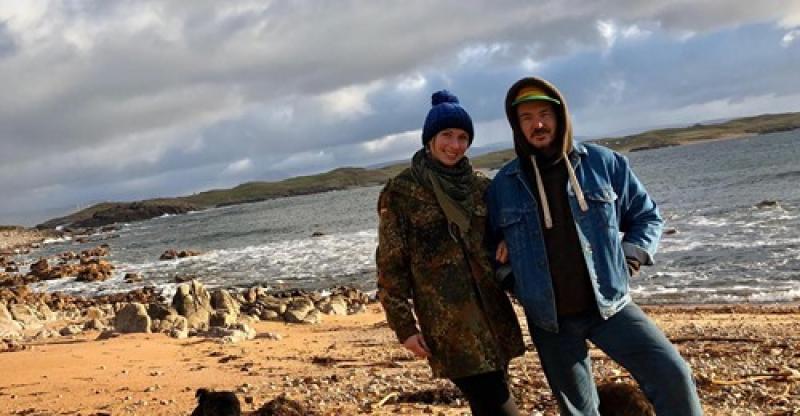 Most of us would do anything to avoid the Covid-19 crisis but one UK couple took this literally last March when they grabbed the opportunity to settle down on an island off the Donegal coast for a year.
Sarah and Luke Flanagan from Leeds said they “jumped at the chance” of living on Owey Island when they saw the advert online.

Owey Island lies midway between Gola and Arranmore and is just off-shore from Cruit Island.
The married couple are the first to stay on the island for the full year 1974 with the island having had a number of summer residents but none having stayed for the full year during the winter in between.
Since March, they have lived with no electricity, no gas and no running water, but most importantly, no Covid and are “absolutely loving” their time on the island.

Speaking this week to the Yorkshire Evening Post Sarah, aged 36, said: “I speak to my mum in Leeds and we can’t believe what’s going on, it’s like we’re living in different worlds.

Solar panels
“We got to the island on around March 14, so literally a week before lockdown, and so far we have missed all of the Covid madness.

“We’re living in a little cottage with a coal fire using coal we stocked up on over the summer, we use a tank to collect rainwater, we cook using big gas bottles which we also stocked up on in the summer months and we have solar panels which we attach to our car battery to charge throughout the day before we charge our phones.”

The couple, who lived in Roundhay in Leeds before moving to Scotland for two years, wash themselves and their clothes by boiling the kettle which they fill with the collected rainwater.
Sarah and Luke stocked up on food during the summer as weather conditions mean they cannot go anywhere to get food during winter months
Sarah added: “It’s good, you don’t realise how much you actually don’t need a lot of stuff.

Dogs
“We just need our two rescue dogs who, like us, are absolutely loving having an island to themselves.
“And we’re actually really well-connected with 4G even though there’s no WiFi.”
Sarah and Luke stocked up on food for the winter over the summer by buying a dinghy and crossing the open ocean for around three quarters of a mile to the nearest mainland, which they are only able to do in good weather.

They caught lots of fish, bought turkeys, have hens for eggs and grow their own vegetables.
Sarah said: “There is no pier or anything and no proper landing so we wouldn’t risk crossing the ocean in bad weather.

Winter
“Instead we just made sure that we had enough food to last us at the beginning of the winter.
“There’s also another island which is attached to the mainland by bridge and there’s a golf club at the end of that island which is where our car is.

“That way we can go to the nearest town if we need which is only about 10 miles away.
“We just wanted to do something different after living in the highlands in Scotland and it’s been a great opportunity for that,” she stated.

Husband Luke, aged 34, works for himself so has been able to take some time out whilst on the island, and Sarah had just finished a job before they went.

Sarah added: “We wanted to see if we could do it and see if we could handle it and actually we’ve managed to miss everything that’s gone on with Covid so we couldn’t have timed it better.”