Donegal firm in major Christmas Toy Appeal in the UK

A Toy Story with a difference 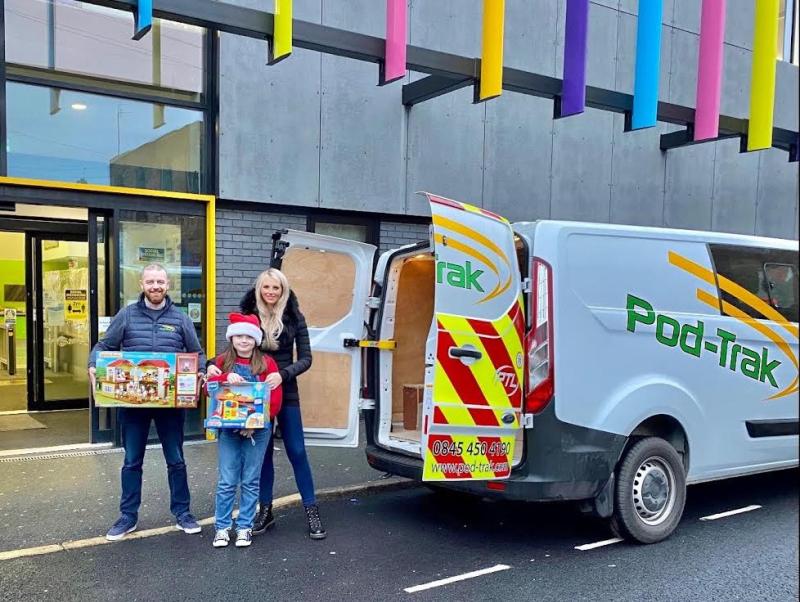 Stephen, Rachel and Lily Given delivering to The Hive Youth Zone, Wirral/Liverpool

Almost every year, charities and other organisations up and down the UK collect Christmas presents for children who might not otherwise receive anything.

This year demand has dramatically increased due to Covid-19 as thousands of children have been plunged into poverty as a result of the pandemic, according to recent analysis, leaving many families facing their very first Christmas on benefits, while those who were already below the breadline have sunk even further into poverty.

But many received gifts from Santa Claus last Friday thanks to an Ardara man who has been working in the UK the past 15 years for a Donegal-owned business.

Pod-Trak is a Railway and Civil Engineering Company owned by Paul O’Donnell who is from Crove, Carrick. Its operations director is Stephen Given from Ardara. He has lived in Liverpool for the past 12 years and been working with Pod-Trak for ten of these.

It was his initiative that got the ball rolling. A chance conversation with his daughter Lily in November sparked an idea that grew into a major drive to rescue Christmas for so many children.
“Lily was on FaceTime to her cousin Daithi in Glenties talking about their Christmas letters to Santa and what they would like this year.

“With the support of Pod-Trak I launched our Christmas Toy Appeal 'Making a Christmas to Remember' and used our two main depots in London and Manchester as drop off points.

“We worked with Manchester Youth Zone, The Hive Youth Zone (Wirral/Liverpool) and Salvation Army (Ealing and Greenford, London) to distribute 100% of what we got to those most in need.
“My wife Rachel Given helped out here in Manchester while Paul O’Donnell, the Pod-Trak managing director and Shannon Crinnion ran with it in London," he explained.

Over the six weeks leading up to Christmas a lot of new toys were dropped off at each depot along with money that was then used to purchase toys and gifts.

In total they have raised over £7,000 in toys and gifts all of which were delivered to their charity partners who then ensured they were distributed to those who need them most.

“Thanks to all the support we got there were many children waking up on Christmas morning to presents that otherwise they may not have received which is a sad thought but unfortunately it’s the reality for a lot of people.”

What a fantastic piece of Christmas cheer and well done Stephen, Paul and the team for turning the season of goodwill into a reality for so many.