Incident claims to be the first in the War of Independence 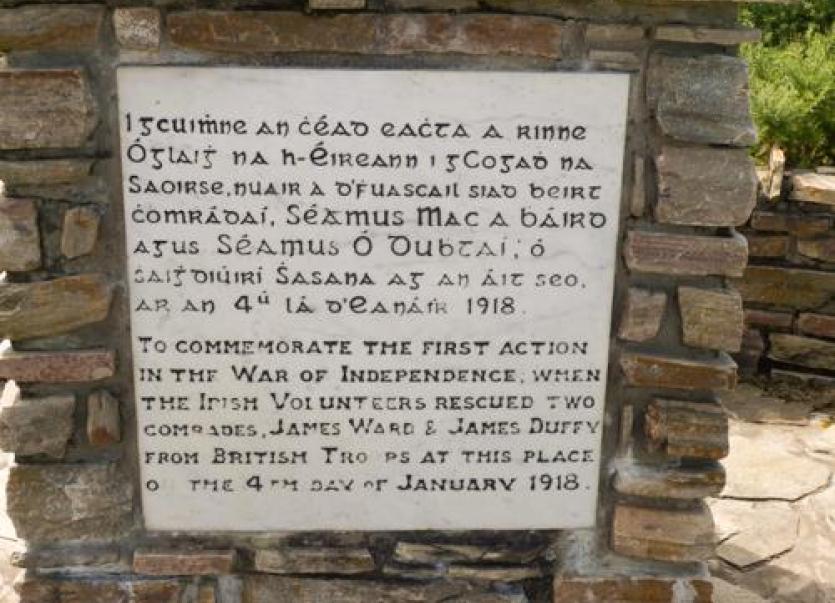 The inscription on the memorial at Meenbanad

A daring rescue in West Donegal which pre-dates by a year and 17 days an incident in County Tipperary that is conventionally regarded as the beginning of the War of Independence, is being marked today.

A number of social media websites are today recalling the events at Meenbanad, mid-way between Kincasslagh and Dungloe in the Rosses, 103 years ago.

The story beging with a mention of a monument bearing the following inscription in Irish and English which sets out what happened.

It reads: ‘To commemorate the first action in the War of Independence when the Irish Volunteers rescued two comrades, James Ward and James Duffy from British troops at this place on the 4th day of January 1918.’

According to the social media site, Why Donegal? the incident ran as follows.

"Meenbanad was the last railway halt (known officially as Kincasslagh Road) before the terminus of the Londonderry and Lough Swilly Railway at Burtonport.

"On 4 January 1918, the two men, who had been arrested four days earlier and faced execution, were removed from the train that was taking them to Derry jail. The daring rescue pre-dated by a year and 17 days an incident in County Tipperary that is conventionally regarded as the beginning of the War of Independence.

"It was the first of several indications that constitutional methods of achieving the aim of ‘old Ireland free’ were being thrust aside by the residual Irish Volunteers soon to call themselves the Irish Republican Army. Unlike most of later incidents, it was bloodless.

"In 1917, James Duffy and James Ward , like thousands of young Irish men had fought in the First World War, and returned from serving in the British Army in France and Belgium, but quickly switched sides, joining the local Irish Volunteers company.

"On New Year’s Eve 1917 the local RIC received information that the two 'deserters' they had been pursuing, were at a dance in Kincasslagh. They surrounded the hall and arrested and handcuffed the two men, detaining them in the nearby Burtonport barracks.

"Then on 4 January 1918, a Sergeant from the Beresford Regiment in Derry accompanied by eight RIC officers arrived to convey the prisoners to Derry where they were to be court- martialed and executed for desertion.

"A local publican, aware of plans to rescue the men, offered the officers a drink in a bid to stall them. The train departed with the prisoners on board but two Volunteers ran along the railway track ahead of the train to Meenbanad Station and hid, awaiting the approaching train.

"It was Fair Day in nearby Dungloe and the platform at Meenbanad Railway Station was thronged. Four miles after the journey had commenced the train pulled up at the platform and the RIC started to load up. 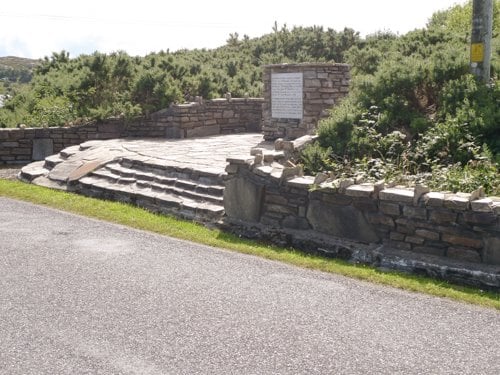 The site where the incident is marked in Meenbanad

"As someone shouted ‘open-fire’, three volunteers jumped onto the train while six others on the platform overpowered and disarmed the military escort. Onboard the train the Volunteers, armed with revolvers, moved quickly through the carriages to arrive at the carriage in which the prisoners were held. The prisoners were freed without a shot being fired and disappeared into the mass of people.

"At a local house their handcuffs were cut with steel cutters. The escapees were split up and departed the area.  James Ward made his escape within hours of his release.

"By the time James Duffy was to leave the area, the scene had changed enormously. British forces began a widespread search, drafting in reinforcements from nearby RIC stations while they awaited further troops from Derry by train. A decision was taken that Duffy should lie low until the escape could be made without fear of re-capture.

"Eventually the RIC surrounded a local co-op where Duffy and local Volunteers had congregated. The Sergeant entered the building but didn’t find Duffy who stood only a few feet away. The premises were thoroughly searched and all wooden crates were stabbed with bayonets.

"Frustrated with not finding anything, the Sergeant turned at the door and leaned on a wooden crate next to him issuing a severe warning to the people of the area. Unknown to him, James Duffy was inside the crate he was leaning on. When the coast was clear, Duffy re-appeared."

The story ends as follows:

"Fearing the recapture of Duffy, the Volunteers moved him to a nearby house. They constructed a tunnel over 100 yards in length from the house to the centre of a tree-enclosed garden.

"The RIC surrounded the house during the night. Duffy lowered himself down the tunnel and made his escape. The woman of the house then covered the mouth of the tunnel and brushed some turf mould over the escape route, making it unnoticeable.

"While the soldiers stood around the house James Duffy had made his escape, right under their feet."