Incredible scenes in the US capital as Trump supporters attempt coup 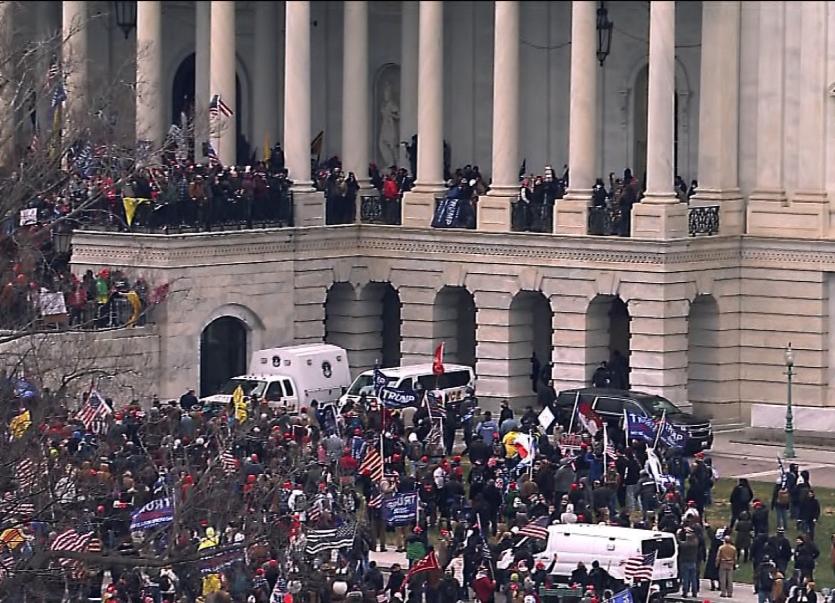 The scene just a short time ago in the US

Viewers of all the major American TV stations and many social media outlets are currently watching President Donald Trump's supporters that have breached the US Capital.

One woman has been shot as one of the most iconic American buildings is engulfed in chaos after Trump urged his supporters to fight against the ceremonial counting of the electoral votes that confirmed President-elect Joe Biden's win.

Shortly after 1pm. US eastern time (ET) hundreds of pro-Trump protesters pushed through barriers set up along the perimeter of the Capital, where they tussled with officers in full riot gear, some calling the officers "traitors" for doing their jobs.

About 90 minutes later, police said demonstrators got into the building and the doors to the House and Senate were being locked. Shortly after, the House floor was evacuated by police.

An armed standoff was taking place at the House front door as of 3pm. ET, and police officers had their guns drawn at someone who is trying to breach it. A Trump supporter was also pictured standing at the Senate dais.

Multiple officers have been injured with at least one transported to the hospital, according to multiple sources.

The Senate floor was cleared of rioters as of 3.30pm. ET, and an officer told US television network CNN that they have successfully squeezed them away from the Senate wing of the building and towards the Rotunda, and they are removing them out of the East and West doors of the Capitol.

It's not clear if any of the individuals have been taken into custody.
Vice President Mike Pence was also evacuated from Capitol, where he was to perform his role in the counting of electoral votes.

Trump has directed the National Guard to Washington along with "other federal protective services," according to White House press secretary Kayleigh McEnany.

The entire DC National Guard has been activated by the Department of Defence following a pro-Trump mob breaching the United States Capital.

President-elect Joe Biden has called on President Trump to step up to the mark and call on his supporters to leave the area.

An obviously embarrassed Biden spoke of what a terrible image this sends out to the world and to the children watching it on TV about how their democracy is not working.

"At this hour, our democracy is under unprecedented assault.”

“It’s chaos, it borders on sedition and it must end now. I call this mob to pull back and allow this work of democracy to go forward,” Biden said as the occupation of the federal legislative branch of government continued.

“Therefore I call on President Trump to go on national television now to fulfill his oath and defend the constitution, and demand an end to this siege,” the president-elect said.