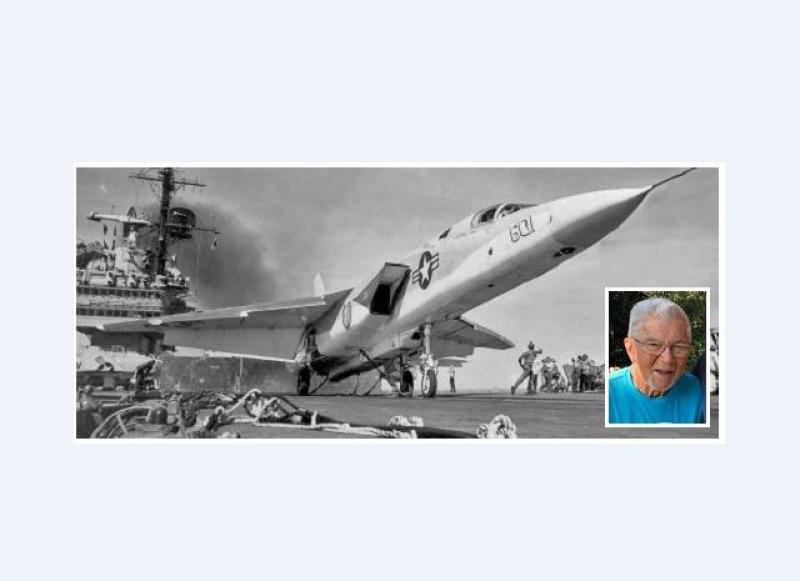 Patrick J Gallagher (inset), who celebrated his 90th birthday in Florida last weekend. His flying career culminated in his being selected to fly the RA-5C Vigilante (pictured)

A commander of the US Navy, Patrick J Gallagher was always very proud of his Donegal and Irish roots.
During a glittering military career he served two tours of duty and flew missions over Vietnam in the late 1960s.
But he never made it home to Ireland - at least not on foot.
He did fly over Ireland once, and recalls how the clouds parted so he could catch a glimpse of a land that remains so dear to his heart.
Last week, Patrick, a grandson of Charlie Jimmy Charlie Gallagher of Sheskinarone, Dungloe, celebrated his 90th birthday, and he featured in a special article in the local newspaper in Bloomsburg, Pennsylvania.
His proud son Brian, who also lives in Pennsylvania, said Patrick would have loved to have got the chance to visit Ireland.
“But he does tell the story of flying over it in a fighter jet one overcast day,” Brian said.
“He said he wished he could just get a glimpse at what real Ireland looked like.
“Just then the clouds parted and he could see directly below him.
"All he could see were green hills, stone walls, slate-roofed homes and farmland."
“He said his heart swelled and he thought to himself, ‘It was just so beautiful to get to see at least once. It just doesn't get any better than that.’
And on he flew.

Charlie Gallagher from Dungloe and his son Edward Vincent Gallagher (Patrick’s father), worked in the coal mines of North East Pennsylvania in the late 1800s and early 1900s.
“Pat was the first in our lineage to attend college,” Brian said.
“He went on to become a Commander in the United States Navy.
“After his military retirement he went on to open a very successful real estate brokerage firm, Pat Gallagher Realty, in Orange Park, Florida.
“My big brother Shawn Patrick and I made it to Letterkenny back in 2007 for the world-wide gathering of Gallaghers. We returned the following spring to help our relations cut turf for their mother, Mary Coll of Dungloe.
“While we were there, we bought our father a copy of Paddy ‘The Cope’ Gallagher's book. “He read it with pride and astonishment of his relative's contribution to the immediate area and beyond....twice.”

The following article on Patrick was published last weekend:

90th Birthday
Patrick J. Gallagher of Orange Park, Florida, turned 90 years old on Saturday.
The third of five children of Edward and Minnie (Kinney) Gallagher, he was born in Mocanaqua, PA, USA on Jan. 2, 1931, but grew up just across the river in Shickshinny.
After high school, he graduated from Mansfield State College before joining the US Navy in 1955. After completing flight training, he was granted a commission as a naval aviator. He went on to fly many of the United States' first-ever, carrier-based, supersonic jet aircraft.
His flying career culminated in his being selected to fly the RA-5C Vigilante.
He served two tours of duty and flew missions over Vietnam in the late 60s. He retired after 21 years of service and started a Real Estate brokerage firm in Northeast Florida.
To this day he maintains a property management and mortgage company which he operates with his wife Betty.
An avid hunter and lifelong distance runner, he lives full-time in Florida, but can still be found very much at home in the woods of Northeast Pennsylvania. He’s run and won his age-group in "The Run for the Diamonds, a 9-mile foot race held each year in late November in the hills around Berwick, PA, 12 times. He finally called it quits one bitter cold, drizzly day in 2016 at the age of 85.
He is the husband of Betty (Wagner) Karschner of Benton, PA. He has three sons, three stepchildren, five grandchildren and two great-grandchildren on the way.