When the schools closed a few weeks ago, staff and schoolchildren all around Donegal were looking forward to a bit of time off school - and as it turns out, because of the new restrictions, they don't have to go back until next month at the earliest.
For one man however, the school door closed for the last time that day.

On Tuesday December 22, Mr Charlie Cannon served his last day as Principal of Errigal College, Letterkenny, and his retirement has begun.
Co-ordinated by Deputy Principal Ms Deirdre Markham, Mr Cannon’s last day in Errigal College was celebrated in a series of online presentations known jokingly as ‘Charliefest’.
The celebrations were preceded by a ‘virtual choir service’, necessitated by Covid restrictions and produced and directed by music teacher, Paddy Molloy and Home School Community Liaison, Ms Margaret McAteer.
Mr Cannon then watched a short movie, ‘Charlie Cannon’s School Report’, made by Caitriona Hasson and written by Hugo Dorrian.
A presentation of a portrait of Charlie was made by teachers, Kasia Baranowska and Robert Fabisiak on behalf of the Polish Sunday School which is based in Errigal College. There were also presentations by Mr Eoghan Megannety, and by Rose Ann Boyle on behalf of the staff. 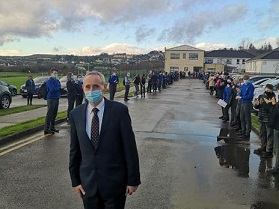 A series of video messages from friends, former and current colleagues was then shown.

Dedicated service
Donegal ETB Chief Executive Ms Anne McHugh thanked Mr Cannon most sincerely for over 38 years of dedicated service.
“Your care for, and patience shown to all students has been a terrific hallmark of your approach to education,” she said.
Ms McHugh spoke of the fantastic results achieved by the school over the years
“The wonderful playing pitch and recent extension are now going to be added to with the significant extension now underway. I acknowledge your part in all of these developments”.
She went on to acknowledge Mr Cannon’s strong and sustained interest in PLC provision “which has grown and developed under your stewardship”.
Ms McHugh closed with a wonderful summary of Mr Cannon’s impact on Errigal College: “Your experience and knowledge and passion for the school and for the local community were exemplary”.
Mr Cannon’s rise to the top started almost 40 years ago when he became a teacher, and his career took its first important step 35 years ago when he joined the staff of Letterkenny Vocational School (L.V.S.) in Lwr. Ard O’Donnell.

Important role
In 1987 L.V.S. moved to its current location in Windyhall, Letterkenny. The Principal at that time was Mr Hugh Dorrian and he recalls the very important role that Mr Cannon played: “Charlie had the chance to set out the metalwork rooms in our new school, and he did a fantastic job. We had the finest metalwork rooms in the county.”
Mr Dorrian went on to outline one of Mr Cannon’s primary management philosophies: “Charlie became Deputy Principal in 1994, and he also served as Acting Principal and as Principal.
“Charlie always made sure that the school environment was right for students and for staff. He always made sure that Errigal College was a positive, friendly and well-run school.”
Mr Cannon’s leadership qualities certainly rubbed off on his colleagues and four of them went on to become principals: Mr Joe Boyle in Deele College, Raphoe; Mr Ciaran Rodgers in Gairmscoil Chú Uladh, Ballinamore; Ms Fiona Temple in Mulroy College, Milford; and now of course, Mr Danny McFadden who will succeed Charlie as principal.
Mr Joe Boyle wished Charlie good luck in his “well earned” retirement. Mr Ciaran Rodgers also wished him well, explaining that “you (Charlie) have been a constant presence in the management of Errigal College in my time there.”
Through Mr Cannon’s guidance, Ms Fiona Temple said she “learned the importance of keeping everything student-centred”. Mr Cannon showed her “the importance of supporting people, and being kind no matter what”.
The incoming principal Mr Danny McFadden, thanked Charlie for everything he had done for him in his time as a student, and then as a teacher in Errigal College.
Ms Jacquiline Gill spent many years in Errigal College before moving to Buncrana. She recalled starting her career in Errigal College. “You were so kind and compassionate, and always looked out for me”.
Mr Martin Gallen is Donegal ETB Senior Educational Psychologist. Instead of looking back, he is looking forward: “No doubt I’ll see you out and about; maybe on the weekly Park Run in Letterkenny”.
Donegal E.T.B. Adult Education Officer, Mr Charles Gorney thanked Charlie for his help in developing the PLC (QQI) programme in Errigal College.
Retired caretakers and ancillary staff spoke of the “privilege it was to work with Mr Cannon”. Mrs Teresa Barron, Mrs Sandra Higgins, Mrs Margaret Vaughan and Mr Pat Mullen went on to say “You were a good friend… always there to support us”.
Ms Deirdre Logue, Ms Eimear Logue and Ms Katie Mulhern have all been teachers in Errigal College. They thanked Mr Cannon for “everything he has done over the years”, and a smiling Katie stated “Errigal College won’t be the same without you”.

Sorely missed
Mrs Cathy Rafferty went on to say “I know you’ll be sorely missed in Errigal College but there comes a time when you have to start a new chapter… I can highly recommend retirement!”
Russell Forde, on behalf of all Errigal College’s current QQI students and all of last year’s Leaving Cert. class thanked Mr Cannon: “Thanks for all the care and support you have given to us all.”
Donegal County Councillor, Mr Jimmy Kavanagh has been a member of Errigal College’s Board of Management for many years. “Thank you for all your help and support over my years on the Board. It really has been an absolute pleasure to serve alongside you.
“You are leaving a fantastic legay,” he said.
Former Minister for Education Mr Joe McHugh praised Mr Cannon highly: “You worked quietly but very, very effectively.
“Your ambition was to leave the school in a healthy place and you have done that.
“Guím gafra ort agus adh mór thar na mblianta atá ag teacht”
The video presentation was closed off with a short speech by Deirdre Markham, who then handed over to members of senior management and some of Errigal College’s longest serving teachers: Mrs Margaret Russell Kelly, Mr Hugo Dorrian, Mr Michael McMenamin, Mr Sean Molloy and Mr John McClean.
Their words were powerful and their message was simple:
“Thank you for everything Mr Cannon, and enjoy your retirement Charlie”.