Train was derailed in high winds going over viaduct 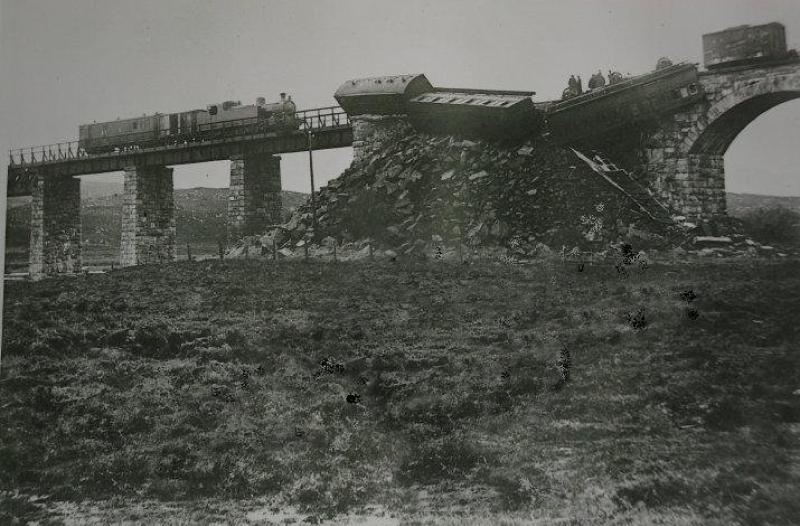 The derailed train on the Owencarrow Viaduct

Four people were killed and several people were seriously injured following a train crash in Donegal on this day in 1925.

At around 8.00 pm on January 30, 1925 a train from Letterkenny to Burtonport was crossing the Owencarrow Viaduct (north of Creeslough) during a storm.

When the train was a little more than 60 yards onto the viaduct, there was a great gust of wind, which lifted the carriage next to the engine off the rails.

The roof of a carriage was ripped off throwing four people to their deaths - Philip Boyle and his wife Sarah from Arranmore Island, Una Mulligan from Falcarragh and Neil Duggan from Meenbunowen, Creeslough.

According to a report of the accident which is published on the Monreagh Heritage Centre website, among the passengers who were treated for shock and/or injuries were: an unnamed Boyle boy, son of Philip and Sarah – shock; Mrs. Brennan, Dungloe – severe injuries to her head; Mrs. McFadden, sister-in-law of Mrs. Brennan – shock; Mrs. Bella McFadden, Gweedore – shock; Edward McFadden, Magheraroarty – shock and wounded hand; and Denis McFadden, Cashel, Creeslough – severe concussion.

Of all the passengers, only one was unhurt, a Miss Campbell, was flung from the upturned carriage, and landed on soft and boggy soil, sinking knee-deep into it.

Rev Father Burns, CC Doe and the Rev J Doherty, Letterkenny were early to the scene and attended to the wounded.

The Inquest
The bravery of James McFadden, Kilfad, and Pat McFadden, Terlin, was recognised at the inquest, for rescuing two women from a carriage hanging over the edge of the viaduct.

At the conclusion of the inquest, the jury found that death in every case was due to the injuries received. They added, as a rider, their unanimous opinion that if a properly constructed (safety) rail had been carried along the whole length of the viaduct, from cutting to cutting, and without an intervening gap, no lives would have been lost. They were also of the opinion that the driver, fireman, and guard were not in any way to blame.

The remains of the viaduct can today be seen from the road (N56) which carries on from the Barnes Gap on the road to Creeslough.

The railway from Letterkenny to Burtonport was operated by the Londonderry and Lough Swilly Railway Company (L&LSR). It opened in 1903, but was completely closed by 1947.

The company closed its last railway line in July 1953 but continued to operate bus services under the name Lough Swilly Bus Company until April 2014, becoming the oldest railway company established in the Victorian era to continue trading as a commercial concern into the 21st century.