Tributes paid at funeral to founder of Foyle Hospice

Dr. Tom McGinley was born in New York, but grew up in Derrybeg and went to St. Eunan's College, Letterkenny 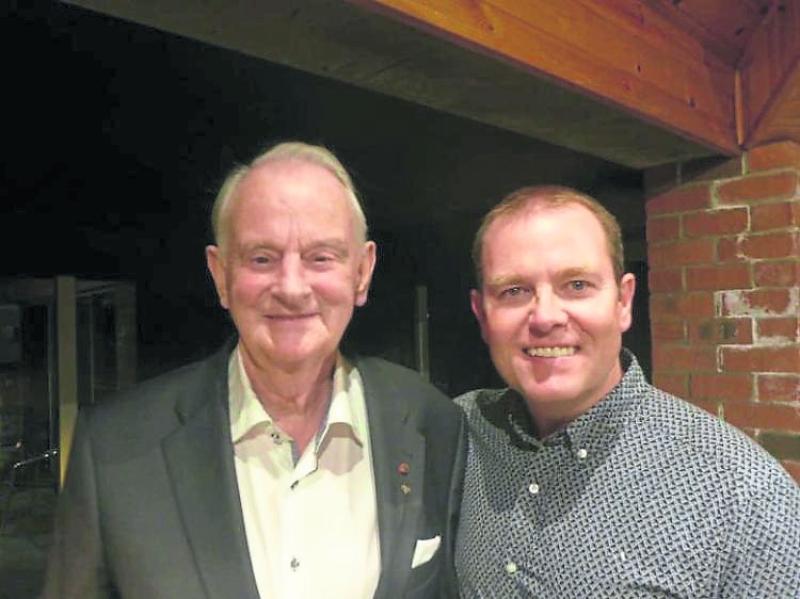 Glowing tributes were paid to Dr. Tom McGinley, the founder of the Foyle Hospice, at his funeral in Derry on Sunday.

Dr McGinley was born in Brooklyn, New York, before his family moved back to Derrybeg in Donegal where he grew up.

After attending secondary school in Letterkenny, he went to university in Galway to study medicine before moving to Derry in the 1960s to work in Altnagelvin Hospital, ahead of moving into general practice.

Dr McGinley, who met his wife Deirdre at the Borderlands dance hall in early 1960s, worked for many years at Aberfoyle Medical Practice, from where he retired in 1997.

However, alongside his practice work, it was his passion for the creation of a local hospice that brought him to so many people’s attention.

Dr McGinley died at the hospice on Thursday at the age of 86.

Since his death, many tributes have been paid to the ‘vision and tenacity’ of Dr McGinley in campaigning for the opening of a palliative care hospice in Derry in the 1980s.

He was buried following a service at St Patrick’s Church in Pennyburn.

Speaking at the service, Father Eamon Graham said the hospice campaign was a ‘bright light’ in Derry during the darkness of the Troubles in the 1980s.

“The lighting of that light was the vision of one man, Doctor Tom McGinley,” said Father Graham.

He launched the hospice campaign after he was unhappy with the standard of care given to dying.

However, it was his encounter with a terminally-ill young cancer patient and his inability to administer effective pain relief or talk to him about dying and death that provided the trigger for what was to become a life-long interest in caring for the terminally-ill.

Father Graham said Dr McGinley was ‘always shy’ to take credit for the creation of the hospice.

“He loved to tell the story of the hospice, about the Orange Order giving the field. We have all heard it many times and it was a great story but he still would not take credit,” he said.

“But the truth is that there would be no hospice today without Dr Tom.”
Father Graham paid tribute to the sacrifice made by Dr McGinley’s family in allowing him to dedicate so much of his life to looking after other people.

He said the significance of what was achieved at the hospice had to be recognised.

“In my opinion the Foyle Hospice became the antidote to the Troubles and the community tensions,” said Father Graham.

“I remember at the time people saying if we could walk every single person in Northern Ireland through the hospice the Troubles would end the next day.

“I think there is an awful lot of truth in that because in some way things in the hospice were as they should be.
“ There was no Catholic or Protestant, there was no British or Irish, there was no believer or unbeliever, there was no border, just a valued human being.”

“I have no doubt that the ethos built by the hospice was carried out into the community and it helped build the peace we enjoy today.”

“Even though he would always be a true Donegal man, he loved this city and he loved the people of this city. And over the years subsequently the people of our city grew to love him just as much,” said Ciaran, who thanked everyone for the support shown to his family since his father’s death.

Ciaran said his father had taken ill on December 26 and was admitted to hospital.

“I had the honour to be able to accompany him to the hospice. He knew where he was, he knew he was back in his second home. He was back in the place he loved and among those who loved him dearly.

“He had reached the end of his journey.”

Following his death last week, tributes to Dr McGinley were led by Irish President Michael D Higgins, who described him as an ‘extraordinary human being’.

“He was a great humanitarian who leaves an exemplary legacy of medicine and care without borders or exclusions,” said Mr Higgins.

“The contribution to that legacy by those of different affiliations is a tribute to the breadth and generosity of Dr. McGinley’s vision, and the great respect and affection with which his name will be recalled.

“As a founder, the Foyle Hospice stands as an example of what can be done together in medicine and in offering care. This achievement, the establishment of the hospice, was just one part of the contribution of a dedicated doctor committed to his community.”

Mr Higgins said Dr McGinley’s birth in the US and his return to Donegal is the story of a ‘wonderful migration and the culture attached to it’.

“His life and experience is an example of the respect for language, all languages. He exercised that respect with an admirable wisdom, kindness and judgment.

“Sabina and I would like to offer our sincere condolences to his children Ciarán, Aisling, Ronán, Sinéad, to his wider family circle, his many friends and all those whose lives he has touched with such grace over the years.”

Derry City and Strabane District Council have opened an online Book of Condolence in honour of Dr McGinley.

The council’s Mayor, SDLP Councillor Brian Tierney, said Dr McGinley had ‘such a profound effect on the lives of a countless number of families’.

"It was after an encounter with a young man with terminal cancer that Dr McGinley pursued the idea of opening a palliative care facility in the city, and we are all immensely grateful for his determination, dedication and passion in following through and opening the Foyle Hospice,” said Cllr Tierney.

"Dr McGinley has left a legacy in this city and its people that will last for generations to come and we know that his vision will continue to be delivered by the hard-working team at Foyle Hospice.

"The Freedom of Derry was one of many deserving honours that Dr McGinley received but for him that's not what it was about – he wanted to help as many people and as many families as he could through some of their toughest days.

"My thoughts and prayers are with Dr McGinley's children, his wider family circle and his many friends.

“I hope that they can take some comfort in knowing how deeply loved and appreciated he was by all across this city, district and region,” he stated.