Launch of A Bridge Beyond – a Donegal digital media project 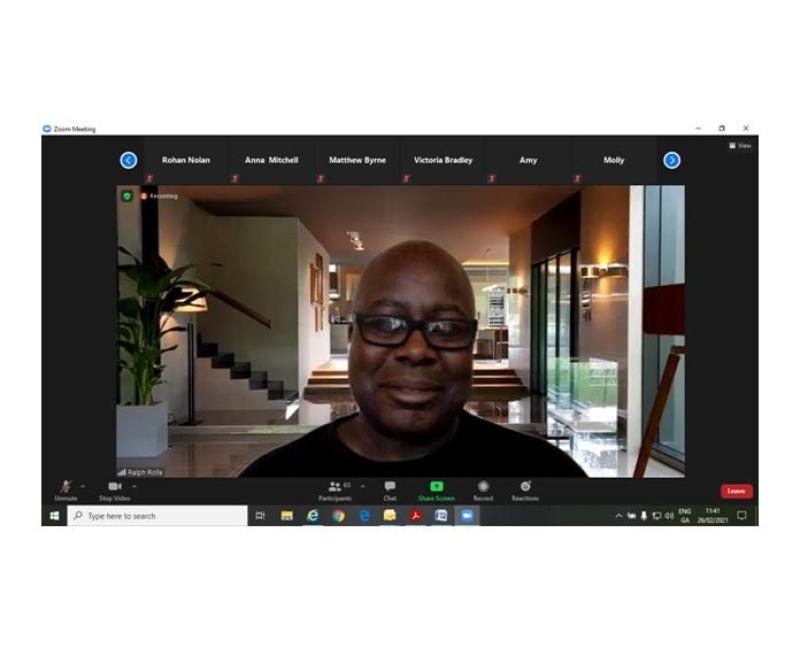 Special guest from New York who spoke at the launch, Ralph Rolle

The EU PEACE IV funded A Bridge Beyond project was officially launched recently by the cathaoirleach of Donegal County Council, Cllr Rena Donaghey and Cllr Paul Canning, chairman of the Donegal Peace Partnership.
A Bridge Beyond is a new and exciting programme of engagement for young people in the county in the use of digital media and music to facilitate the exploration of their multiple identities as young Donegal people and to build new friendships.

Sarah Murphy from Wall2Wall Music hosted the Zoom launch and outlined the itinerary for the morning.

Students had already made a start and were introduced to their facilitator earlier in the morning.

Sharleen Tinney, project coordinator, Donegal County Council welcomed students to the launch and thanked the teachers for their commitment over the past few weeks and commended Wall2Wall Music on the hard work involved to get this far.

She advised that there was a great programme lined up for everyone over the coming weeks which would be most enjoyable for all.

‘A Bridge Beyond’ is a multicultural popular music and digital arts production, performance, recording and publishing project.

The EU PEACE IV funded project seeks to open up a shared creative space using online means, in which TY students can find common ground, bridge between each other and bridge beyond to the global conversation around citizenship as they transition to the next phase of their lives.

Underpinned by the principles of global citizenship the students explore through creative music making, spoken word and digital media what being a global citizen means to them, how they relate to others especially those from different cultural backgrounds and the responsibilities they feel to society and to the natural world.

The interschools collaborative events involve workshops and video provocations from Irish and international guests designed to encourage explorations of cultural diversity and identity which will influence the students as they create new works.

The programme has been designed to break down barriers and to form new relationships resulting in a positive change in attitude of participants and the promotion of positive relations.

It will enhance skills and creativity and raise awareness and understanding of other cultures, traditions and beliefs as well as developing skills and confidence of participants.

Speaking at the launch Cllr Canning said this is an exciting project and great opportunity for TY students across the county.

It was a great honor and privilege to have Mr Rolle provide a very inspirational and motivational talk to the students.

The excitement and atmosphere from all present was electric and similar to that of a live concert only online.

Ralph Rolle shared his story from growing up in the projects in the Bronx to becoming a world -renowned drummer and successful entrepreneur.

He also shared his passion giving back to his local community through his twin passions of music and food, as well as his current dream to develop five cancer hospitals for children around the world starting in Ghana.

He shared the ethos he lives by that he calls the 5 Ps. Passion, Power, Placement, Performance and Purity.

This inspirational talk and Q&A was the perfect springboard for A Bridge Beyond and all the TYs involved to draw on at the start of this project.

Ms Murphy, together with Cllr Canning and Sharleen Tinney thanked Ralph Rolle for taking the time to join the Launch event.

This exciting initiative is supported by the EU’s PEACE IV Programme and managed by the SEUPB and delivered locally through the Donegal PEACE IV Partnership.

Match-funding for this project has been provided by the Executive Office in Northern Ireland and the Department of Rural and Community Development in Ireland.