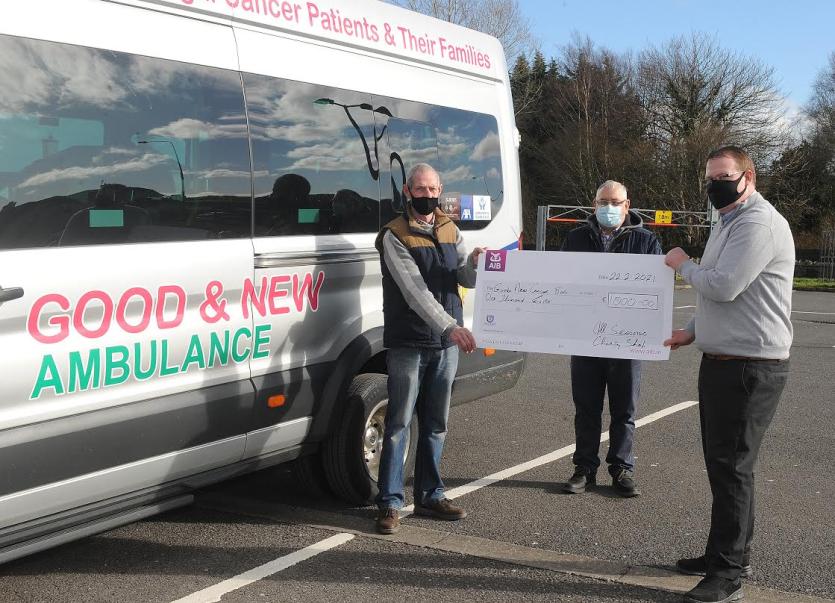 A valuable donation from a Ballybofey charity shop will help add vital funds to provide free transport from Donegal to Galway for people affected by cancer.

The All Seasons Charity Shop, which is based at Units 4 and 5 at the College Court on the town's Main Street, contributed €1,000 towards the Good & New Donegal Cancer Bus Charity.

As well as the bus service, the Letterkenny based charity also runs a drop-in centre which provides support for people and their families and to date has carried approximately 2,200 patients to Galway and supported cancer families by donating over €400,000 to help them in their time of need.

The shop opened in November 2011 when a group of individuals decided to lend a practical hand to meeting needs in the towns. They initially thought a drop-in centre and charity shop would suit the bill but according to spokesman, John Whyte, it blossomed into something bigger.

They take in secondhand clothes and bric-a-brac and have enjoyed an excellent response.

“We have a great relationship with the local community. Because we’re very local, people can see where all our money goes and that’s good because we are accountable to everyone that donates.

“When we donated our first €500 to the local St Vincent de Paul we thought we had reached the top. Every year since we have given donations to various local charities we feel are helping out,” he said.

The idea to help the Good and New Cancer Bus was not new as they had assisted it in the past but with lockdown affecting them hard, they decided to see how they could help.

Mr Whyte said he had heard that because of the Covid-19 situation, the service was finding it hard to get financial support for their weekly trips taking patients from Donegal to Galway for radiotherapy treatment so he approached their All Seasons committee to see if they could help out.

“We can't do anything at the moment. Back in November we were able to operate using the approved click and collect method and that enabled us to get enough money to cover our rent but now that's all gone. When we were last opened we were inundated with support for a few days, we nearly had to control the number of people coming in.

“It was a mixture of people donating stuff and just glad to get out and enjoy the community spirit we have here. In the days before Covid people liked to come in for tea or coffee and just have a chat. It was good for everyone but that's gone for the moment,” said Mr Whyte.

He added they were very lucky to have people involved who were very loyal and dedicated to their shop and this was another factor helping to keep their unit going over the years.

“Some have joined from schemes and then stayed on. It's like a big family. We also have other people waiting in the wings to get involved. We miss all this now as well as our Friday morning music sessions. It was a great social gathering with tea and scones and whenever we donated some money, the organisation would usually send a speaker along to tell us about their work.”

“They are people who are providing a great voluntary service to the community. How else would people get to Galway for their treatments? They have kept going through all three lockdowns and with no source of income at their shop in Letterkenny at the moment, it must be hard going.”

“We really miss interacting with all our customers and friends in the charity shop. Hopefully when restrictions are lifted we will all see each other again,” he added.
Eamonn McDevitt from the Good and New Cancer Bus said they were delighted with this timely donation.

“We are 28 weeks closed this week and we depend almost entirely on the income from our Good & New Charity Shop at the Warehouse Student Village Port Road, Letterkenny to fund the bus so you can imagine we were delighted to hear from John and the All Seasons Charity Shop in Ballybofey.

“It will help keep us going another while but things are getting very tight. We applied to three different funders for help but were refused by all three. They gave other reasons like other charities were more in need and stuff like that. It seems Donegal is not too far up any priority list when it comes to help from down the country,” he said.

He added if you, any member of your family or any person you may know is suffering from cancer and does not know what is available for them or what direction to take this is where the people at Good & New can help.

“Good & New is here for friendly advice and all services are free, including the bus service. If you are in need of advice then just call (074) 9113437 and you will see the great things we provide for the people of Donegal.

“All money raised in Donegal stays in Donegal. If we have helped you in the past please try and help us now to continue helping your fellow county patients,” he said.