Longest serving priest in the Diocese of Derry 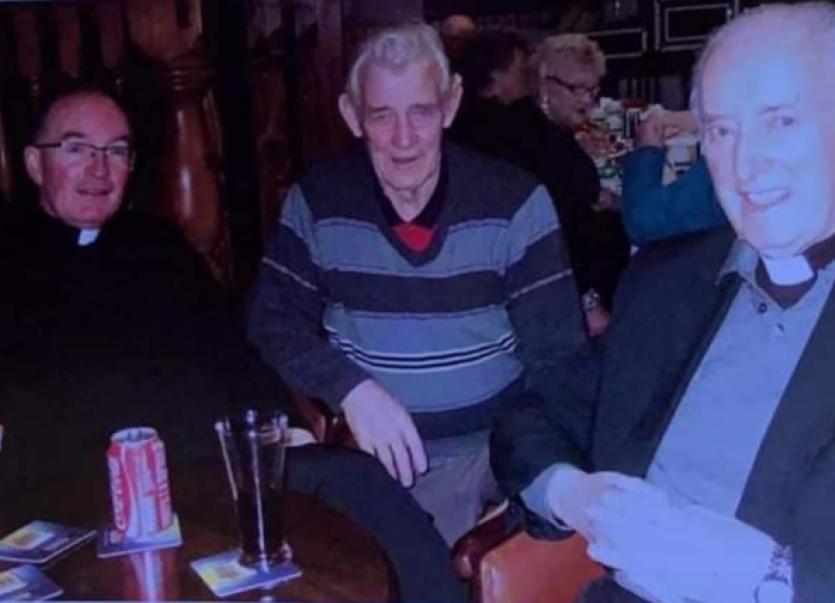 Donegal's Father Michael J Keaveney, who is originally from Moville has become the first priest from the Derry Diocese to celebrate his Platinum Jubilee milestone, 70 years in the priesthood.

Fr Keaveney's Platinum Jubilee Mass was celebrated by Bishop Donal McKeown on Wednesday night in The Star of the Sea Church, Faughanvale. Fr Keaveney (94) is the the retired curate in the Faughanvale Parish.

Congratulating Fr Keaveney, Eunan McGlynn, who was originally from Burt, said: “I remember Fr Michael on occasions in the 1950s helping out his brother Fr Lawrence, who was then the Curate in St Aengus' Church in Burt. One abiding memory for an altar server is that Fr Michael always gave a tip. Congratulations to Fr Michael on this wonderful occasion.”

Fr Keaveney was also congratulated by the Gaels of St Mary's Faughanvale GAA, who said: “Fr McDermott PP has just told us, Father Keaveney was 30 years a priest when he was born. We think maybe Father McDermott needs to go back to school to check his maths.

“Fr. Michael Keaveny was was Ordained to the priesthood back in 1951 by Cardinal Micara in the Basilica of St John Lateran in Rome. Along with him on that occasion were five other Irish Students, as well as students from the Czechoslovakian College, and seminarians from the nearby Lateran Seminary. He was privileged to have his parents and his elder brother (Fr Lawrence Keaveney) who had been ordained three years earlier.

“In the days that followed, Fr Keaveney said Mass in some of the famous Roman churches and also in the Catacombs, the ancient burial places outside of Rome where many saints are buried. The newly ordained Irish Priest and relatives had an audience with Pope Pius XII in the Vatican too.

“It was the end of June before he had completed his studies and was able to come back to Ireland. After a brief holiday at home, Fr Keaveney was was appointed to the staff of St Columb's college, an appointment that was destined to last for 25 years. Although it was a bit different from what he had originally envisaged as the life of a priest, Fr Keaveney, soon found out it was a good place to be, especially through the teaching of religious knowledge, a faculty of which he became head, as well as sport where he was involved with Gaelic football and Swimming.

“In 1975, Fr Keaveney was was appointed Administrator of the newly-founded Galliagh parish in Derry City, where he found himself involved in getting a new Church completed and new schools established. It was a time too where there was much unrest in the city, unrest that had spread to that part of the city as well.

“His other appointments were as Parish Priest in both Killygordon in County Donegal and Omagh in County Tyrone.

“He retired at the age seventy from his role as parish priest and came to Faughanvale to serve as a curate in 2002. In 2006, Fr Keaveney suffered a stroke, which led to his complete retirement in 2009. Since then he has been leading a quiet, fairly relaxed and easy life in a very beautiful and friendly area, Thanking God for having been so good to him in so many wonderful ways.

“Father Keaveny also celebrated another milestone in February, which was the 50th anniversary of the discovery of the wreck of the La Trinidad Valencera, when he was part of the City of Derry Sub Aqua club.

“We wish Fr Keaveney congratulations on reaching this historic milestone from the priests and parishioners of Faughanvale.”

Recalling his Ordination, this time last year, Fr Keaveney said there had been six other Irish priests ordained along with him that day.

He added: “The ordination started at 8am and did not finish until midday because there were many others being ordained that day too.

“Travelling was not as easy then, though we have some restrictions with the coronavirus now, but I was very glad that my elder brother, who was ordained three years before, and my parents were there for my ordination.”

Thanking God for the years he spent teaching in St Columb’s College and then ministering in parishes, Fr Keaveney said: “I thank God that I have lived so long and, hopefully, I have done the best I can. I pray for vocations to the priesthood as they have dropped off considerably.

“So, pray for vocations and please God there will be plenty of Irish hearts open to the Holy Spirit and to joining the ministry.

“Thank God I am still able to celebrate Mass and get around, and thank God for all of you here to help me celebrate this day.”

Congratulating Fr Michael on the occasion of his 69th Anniversary, last year, Monsignor Andy Dolan recalled his first meeting with Fr Keaveney, when he was a first year at St Columb’s College.

He said; “Everybody who came through St Columb’s had very kind memories of him; a man of great ability. He is much respected, and that was the case no matter where he went.”

“Fr Keaveney always kept himself well, physically and spiritually, and had a golf swing to die for. He also has a great wit and is steeped in knowledge of the Scriptures, especially the Psalms.

“He has been a good and faithful servant, always providing a great service to all. I wish him many more years of blessings and that he will get a couple of cheques in a few years time!”

Fr Michael prayed for protection for the world from the coronavirus, telling the congregation: “God will take care of us. Trust in God”.