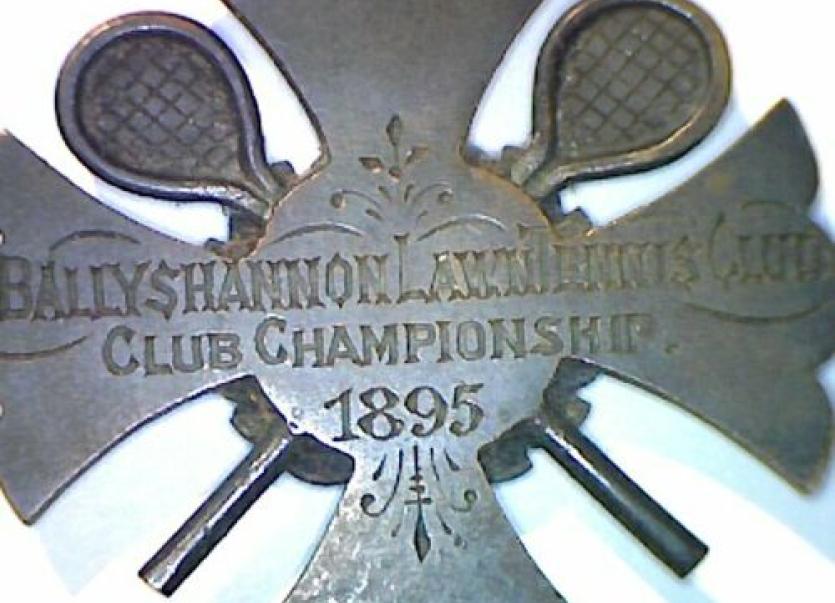 A rare medal for the Ballyshannon Lawn tennis championship of 1895 fetched the princely sum of over £100sterling when it was auctioned on the popular trading website eBay this week.

Not a sport that was normally associated with the southern Donegal town, the championship styled as the south Donegal championship was first held in 1892 and attracted competitors from around the country, in the years that followed.

While there were only five bidders for the medal, 22 bids were proffered with the price jumping from £31 to over £100 in the final hours of the auction. The medal was finally sold for €119.

The item was described as bronze and said to be in superb condition. The purchaser was mentioned as a private bidder, so whoever bought it, remains a mystery at present. It can only be hoped with came back to the locality.

The previous owners were located in Wotton-under-Edge in England.

Lawn tennis was a very popular sport of the time and was often associated with the gentry.

A report of that year’s championship recorded that the games were held in August:

“Play was continued on Friday and Saturday in splendid weather, one slight shower on Friday morning alone falling while play was going on.

“The final match for the championship of South Donegal excited great interested the locality, fully 300 spectators being present when Pringle, who had lost the toss, commenced serving punctually at 4 o'clock .

“The onlookers were rewarded by the most magnificent display of tennis ever witnessed in the North West of Ireland for the first couple of games Pringle was very nervous and Hamilton whose large tournament experience has given him a coolness only possessed by veteran players, had no difficulty in securing them each 15.

In the third game Pringle, serving secured the 1st aces. Hamilton the third and then Pringle the next two and his first game. It would take up too much space to follow the fortunes of the players and details, suffice it to say that the great struggle was over the 4th set.”

In the end the Cup was won by Drummond (WD) Hamilton of the Fitzwilliam LTC in Dublin, who defeated RW Pringle of the Mount Temple LTC. In the end it had boiled down to Hamilton’s “steadiness and greater experience”.

It was also noted that the Cup would now be replaced as Hamilton had won it for the third successive occasion.

“In the ladies singles, Miss Whyte of the Carrick and Shannon LTC, a young lady of about 15 years of age, astonished the handicappers (who had let her in rather lightly) by winning with ease, it was certainly wonderful that one so young could hit so hard and place so true.”

Let hope the new owner or owners of the medal will appreciate their new possession and the event which took place 126 years ago.