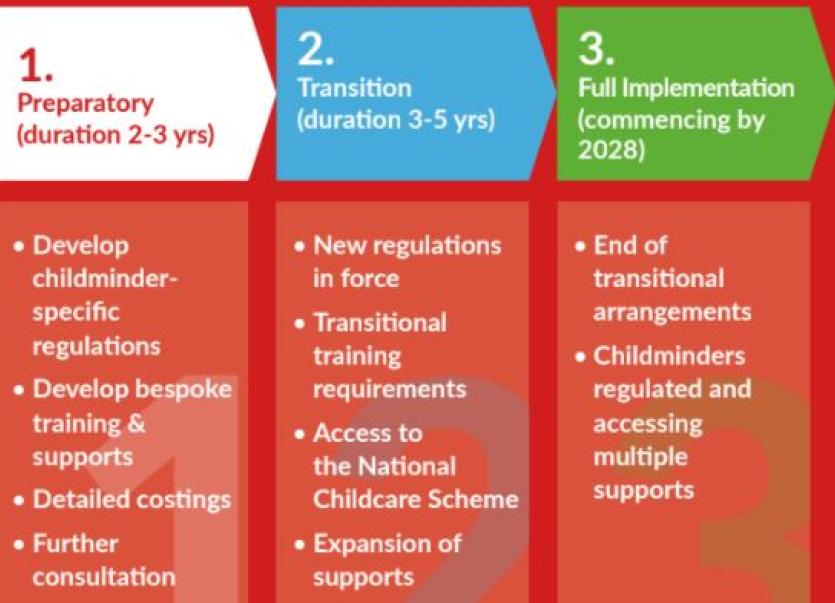 The National Action Plan for Childminding was launched today. Until now there has been very little State support for childminding or public recognition of the important role that childminders play.

The National Action Plan aims to improve access to high quality and affordable early learning and care and school-age childcare through childminding, and sets out a phased approach to bringing childminders within the scope of State-funded supports and regulation over the period 2021-2028.

Childminding offers many benefits to children and parents, but until now has received little formal recognition by the State. Despite its many advantages and its continued popularity among parents, it has remained largely unfunded, unsupported and unregulated.

The extension of regulation to childminders, which is expected to happen within the first 2-3 years of the National Action Plan, will allow parents who use childminders to access subsidies under the National Childcare Scheme. In this way the Action Plan will support parental choice in type of provider of early learning and care and school-age childcare. Childminders will be supported to take part in the National Childcare Scheme at the earliest possible opportunity, provided they have completed initial training requirements and meet other core regulatory requirements (e.g. Garda vetting, first aid) and go on to complete further training over a period of years.

A cornerstone of the National Action Plan is recognition of the differences between childminding and centre-based provision of early learning and care and school-age childcare. Given the home and family setting in which childminders operate, the National Action Plan will include development of new regulations and training that are specific to childminding, amendment of legislation to allow childminders to register with Tusla, and review of the funding and financial supports available for childminders.

The National Action Plan sets out a phased approach to reform:

Phase 1, which will be a preparatory phase lasting 2-3 years, will involve: review of regulations, development of bespoke training and supports, detailed costings, and further consultation.
Phase 2, which will be a transition phase lasting 3-5 years, will see new regulations coming into force, access opened to the National Childcare Scheme, transitional training requirements, and expansion of supports.
Phase 3 will involve full implementation, with the end of transitional arrangements, and childminders regulated and able to access multiple supports.