Covid-19 cases have not decreased here as much as expected

'Outbreaks are occurring in schools, workplaces and among families' - Director of Public Health North West 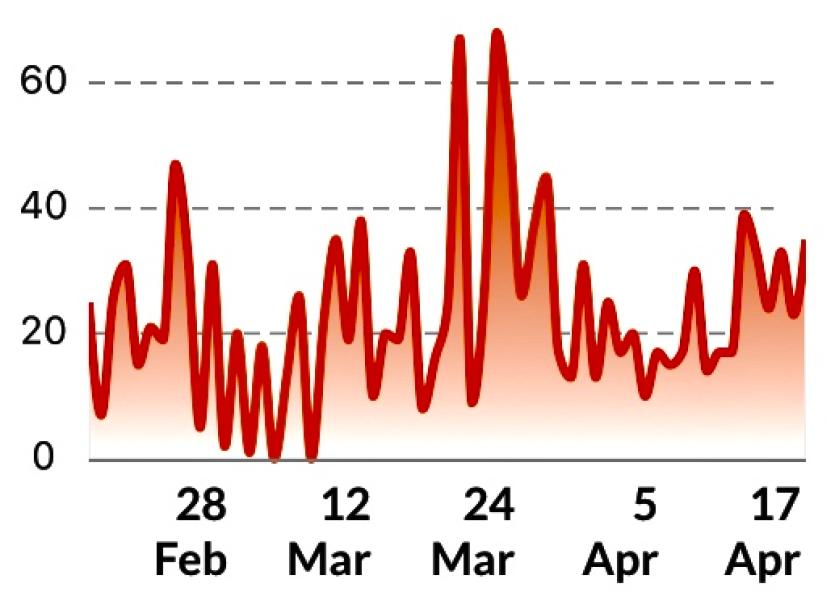 Covid-19 transmissions are not decreasing here as much as expected, the region’s Director of Public Health said today.
It comes as concerns are growing again in Donegal as it emerged this week that the county had the highest 14-day incidence rate per 100,000 population in the period from April 5 to April 18.
As of Tuesday morning the transmission rate in Donegal was 204.2 per 100,000 ranking it higher than Kildare, Offaly, Dublin and Meath, counties all in the top five.
And Dr Anthony Breslin, Director of Public Health in the north west has asked the people of Donegal to get tested if they develop symptoms.
He said: "Cases have not decreased as much as expected. Outbreaks are occurring in schools, workplaces and among families.
“If you develop symptoms get tested via your GP and if you are at work or in school leave and get tested. Do not stay on at work or school if you are ill. Please reduce socialising."
He added that those being tested will be required to follow public health measures, including social distancing, not travelling by public transport, practising good personal hygiene and wearing a face-covering throughout the test appointment (including travelling to and from the testing centre).
“The HSE strongly encourages all members of the public identified as requiring a Covid-19 test to attend for their appointment. In this way, we can identify quickly those who will have contracted the virus and take steps to prevent its spread across families and community.”
Nationally, 852,189 people have received their first dose vaccinations while the figure for the second vaccination stood at 351,874 as of April 17. At present the lowest rates of transmissions in Donegal are in the Municipal Districts of Donegal and Glenties.
The Glenties MD had 24 confirmed cases in the latest two week cohort available while Donegal had just nine cases.
As of 8pm on Monday night, ten patients were under care for Covid-19 at Letterkenny University Hospital.
At that time, it had no critical care bed facilities available.
Of the ten hospitalised because of Covid-19 two patients were getting treated in the critical care unit.
Acting Chief Medical Officer, Dr Ronan Glynn has said that the average number of close contacts has remained steady at 2.6 in recent times.
However, if that figure rises to 3 or above, , they will see an increase in incidence.
It would be Thursday before the impact of the full impact of the re-opening of schools and the construction industry would be deciphered.