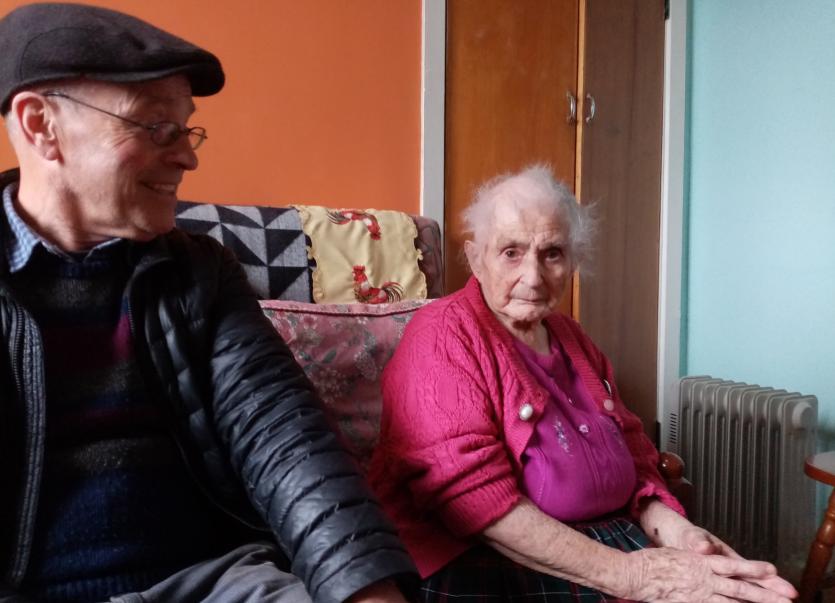 A fluent Irish speaker from Glencolmcille who celebrates her hundredth birthday in Castleview, Dunkineely today, Wednesday, April 21 is exceptionally healthy and rarely needs to take any medication for ailments.

Peggy née Bradán (Fisher) and Séamus Mc Menamin married and had five children Marian, Bernadette, Gerard, Patrick and Margaret (deceased).
“She grew up in Glen until she reached her teenage years and then she moved down to Killybegs where people at that time sought work,” her son Gerard Mc Menamin explained.
He also recounts how his mother only could speak Irish when she arrived in Killybegs and it was through her own determination and diligence she learnt to speak English.

Married and had a family

Later Peggy fell in love and married and raised a loving family.
“She married my father from through the gap, he came with the railroad and they got married and lived in Bruckless in the railroad cottage,” Gerard said.
His father Séamus and his grandfather Andrew both worked on the railroad in years gone by and the family enjoy a strong affiliation with the railroad industry in Donegal and further afield.
Gerard recalled that his grandfather, a talented engineer, who was stationed in Bruckless would travel from Killybegs to Strabane with the railroad as part of his job.
Gerard’s father, Séamus, was a maintenance man who was called upon when the train came off the tracks or in times of mechanical difficulty.
“They were doing maintenance all the time,” Gerard said.

Bruckless hotel
Meanwhile, Peggy worked in a Bruckless Hotel in the area for a time.
The former TD Joe Brennan who represented Donegal in Dáil Éireann from 1951 to 1980 lived near the hotel and oftentimes many members of the Dáil would stay in the hotel to meet and work with Joe.
Peggy was exceptionally gifted at sprigging, the art of decorating lace and linen through needlework. She enjoyed doing needlework and was known to be exceptionally talented with lace and linen. Her work is retained by family members.
“She was fantastic at sprigging, working on the lace and the linen and then putting on the patterns that they would sew in with a thimble on their thumb,” Gerard said.
Such was the standard of Peggy’s art the owner of the local craft shop would ask her to supply them with ware: “She would do a lot of that for the local industry there in Bruckless, Theresa’s Crafts, she used to work for them, ” he said.

Healthy
Gerard said that unlike other people his mother’s age Peggy doesn’t depend on any kind of medication which is unusual for a woman of her age: “She was a very determined type of person,” said Gerard adding that the people of that generation were exceptionally tough and weathered incredibly hard and difficult hard times.
In her spare time, Peggy enjoys to listen to the radio and to watch the television
Her birthday took place in Castleview, Dunkineely on April 21.
A small gathering of people  will join Peggy today to mark the milestone event - in line with all HSE regulations and guidelines in relation to Covid-19.