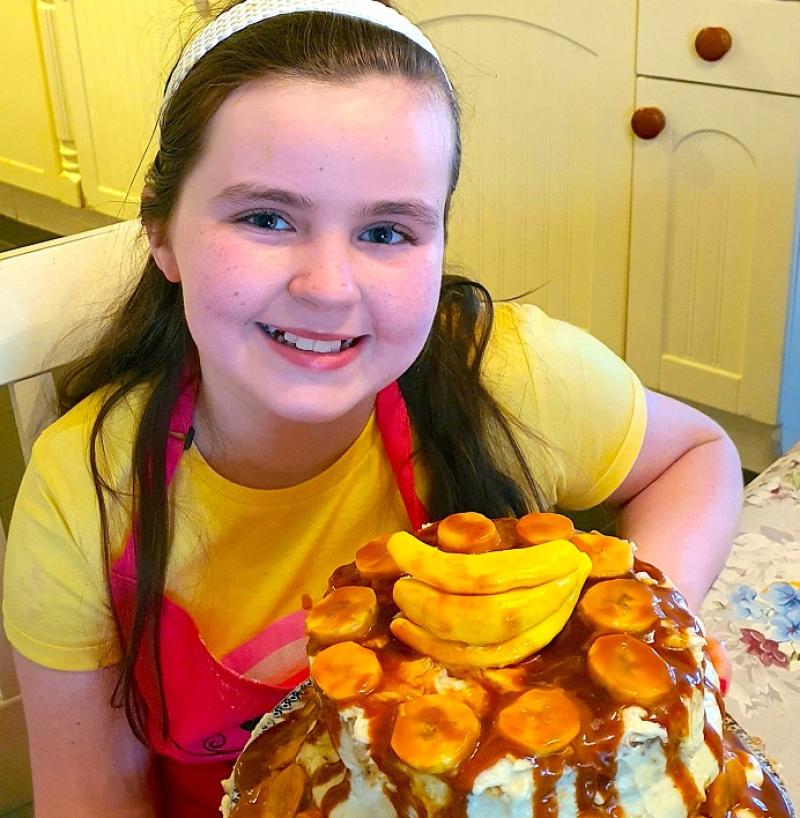 A Letterkenny 5th Class pupil at Gaelscoil Adhamhnáin is in 'dessert' heaven and enjoying the ‘sweet’ taste of success after becoming a top winner in the recent nationwide search by banana importer Fyffes to find a new mouth-watering dessert that has a banana as its key ingredient.

Clíodhna Mulkearns (11), responded to the invitation fronted by celebrity cook, Donal Skehan and was amongst a large group of what the popular television presenter called ‘creative and inventive meal-makers’ who accepted his challenge to design a desert that could become a meal-topping choice on tables around Ireland and abroad.

The eldest of four children, Clíodhna developed a passion for cooking and baking from a young age and, along with help from her brother Dáithí and sisters Enya and Éilis, she enjoys making pancakes for her mum Sarah Ann and dad Damian every Sunday.

Inspired by her grandmothers Breeda in Crossmolina and Anne in Falcarragh, who have encouraged her over the years, Clíodhna hopes to study Home Economics in secondary school and has the ambition of opening her own bakery one day.

In creating her prize-winning entry, which she names ‘Clíodhna’s Caramelised Banana Cake’, and which won the ‘Best Junior Baker under 12 years’ category, Clíodhna combined a delicious fusion of cake sponge, banana and buttercream, all topped off with a caramel drip and caramelised bananas.

Devised by Fyffes to mark the annual National Banana Day held recently, the invitation to ‘design a dessert’ was in-line with a similar event which took place last year when the challenge was to capture the national lockdown-relieving popularity of home cooking by asking Ireland’s bake-at-home families to come forward with new and innovative recipes for banana bread.

Complementing what he called ‘the exceptional level of skill’ revealed by all who took part in the Competition, Donal Skehan said: “the success that Clíodhna has achieved reflects the dedication and devotion she puts into her baking and the obvious enjoyment she gets from it“.

Responding to the widespread level of interest that the event has generated amongst the public, Fyffes marketing manager, Emma Hunt-Duffy said: “what’s really exciting to see is the increasing number of young people now taking part in the competition; it’s fantastic that our baking challenge appeals to the next generation of cook-at-home enthusiasts”.

“Also noticeable is the extent to which entrants are willing to experiment in finding new ingredients and taste combinations, especially when formulating recipes to suit those with particular taste preferences and those with allergies or other dietary needs,” Ms. Hunt-Duffy added.

Details of each category winner and their winning recipes can be viewed on http://www.facebook.com/ FyffesIreland/