€34,000 for Ladies Gaelic Football Clubs in Donegal as Lidl is on the ball 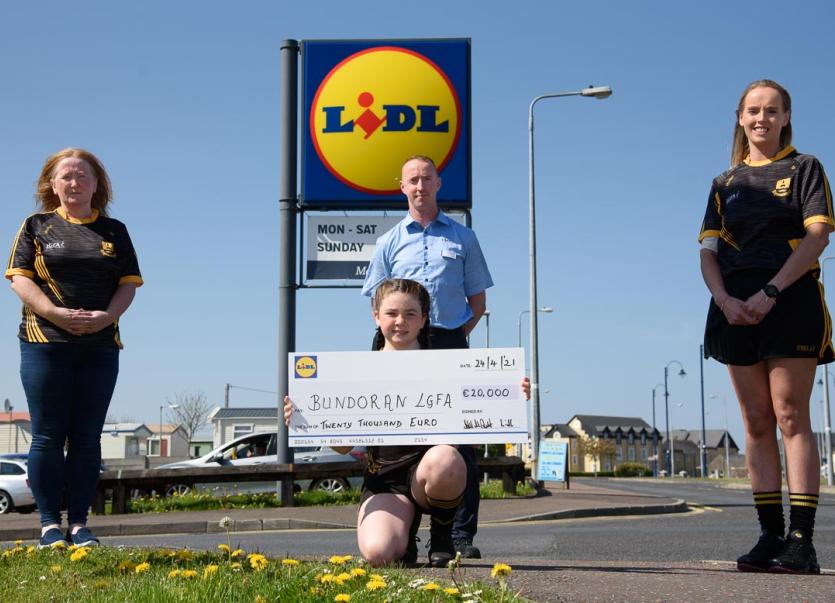 More than €34,000 is being awarded to Donegal Ladies Gaelic Football clubs in Donegal as result of the Lidl fundraising initiative.

Réalt na Mara (Bundoran) LGFA Club were awarded a top prize of €20,000 from the retailer as part of the initiative which called on communities to support their local clubs by scanning their Lidl Plus app at the checkout in their local Lidl.

The club is one of four, one from each province, that picked up the top prize.

In total, Lidl has rewarded more than 360 LGFA clubs throughout Ireland, benefitting from new jerseys to €20,000 in funding.

The innovative initiative was launched as part of Lidl’s new campaign, Level the Playing Field, that called on communities to get behind their local club by scanning their Lidl Plus app to receive a digital stamp on their stamp card.

Each club that achieved a minimum of 50 completed digital stamp cards was guaranteed a reward.

Commenting on the initiative Antoinette Delaney, Chairperson of Realt na Mara said: “This is terrific news for everyone associated with the club. We had a nervous wait before we were confirmed as the Ulster winners and we’re just delighted to know we will be receiving the €20,000 top prize from Lidl. There was already great excitement in the club at the prospect of getting back out on the pitch and this will certainly put an extra pep in everyone’s step! Thanks to everyone who collected stamps for our club and to the wonderful staff in Lidl Bundoran for all their help.”

Michael McDermott, Store Manager of local store, Lidl Bundoran said: “We are delighted to award Réalt na Mara Bun Dobhráin LGFA Club with €20,000 in funding. It’s been incredible to see the community really get behind the club to raise some much-needed funds at grassroots level, and in doing so raising awareness for women in sport as well as helping to encourage young girls to get involved in sport from a very early age.”

The announcement comes as the Lidl National Football Leagues are set to get underway on May 23.

Since 2016, Lidl has invested more than €5 million into the partnership with the Ladies Gaelic Football Association and during this time, ladies football players across the country have noticed significant changes in how the game is perceived thanks to the support of the retailer.