One of Bundoran’s famed outdoor pools has sprung a leak, but what next? 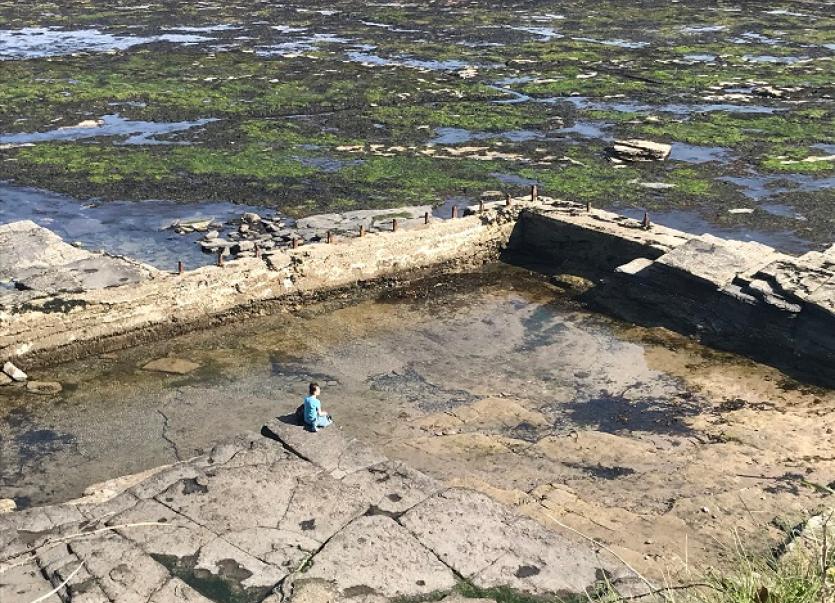 A solitary visitor to Bundoran's West End outdoor pool at the weekend but with only a trickle of water (Photo: Michael McHugh)

A number of people in Bundoran have been raising concerns about the inability to take a swim in one of the two historic outdoor swimming pools in the popular seaside resort over the past couple of weeks.

The West End swimming pool has, for over a century, been a popular location for individuals and families during the summer months, but it has become much more popular over the last year, with the forced lockdown and travel restrictions resulting from the Covid-19 pandemic.

But locals have said that the pool has not been refilling properly after a recent clean out by Donegal County Council.

The local outdoor ‘thruppeny pool’ on the foreshore and on the beach side of Waterworld was also cleaned out recently but has experienced no such issues.

As to the West End pool, it has been suggested that it is a combination of low tides and a crack in the pool itself, which has prevented the pool from properly replenishing itself.

One local said: “While it may be a case of refilling when there is a higher tide, it still has been leaking back into the sea at a fairly substantial rate.”

Yesterday morning, the local tourism officer Shane Smyth confirmed that the pool was full, when he passed it.

Following queries to Donegal County Council about the ongoing issue, a spokesperson did not directly respond to the issue of what people say is a leak in the pool, but said:

“Each year Donegal County Council drains the West End and Thruppeny pools in Bundoran to remove debris and materials which have accumulated over the winter months.

“The pools are refilled and drained once again to flush them thoroughly. While empty, repairs are conducted on the structures, as necessary, following the winter storms.

“This work is conducted ahead of the May Bank Holiday when the weather is more settled and the visitor numbers will begin to rise in earnest.”

When contacted locally based, Cllr Michael McMahon said that he was aware of the issues and he was trying to get the matter dealt with as soon as possible.

“We are still investigating the west end pool. It is full at the moment (Wednesday morning). The problem is that we cleaned it out, but about two weeks later there was a leak in it. We fixed the leak and then there was no tide for a week and the incoming water was not able to get over the pool wall. We are now looking at replacing the front wall as it is fairly high. The leak has been fixed but it may not be holding and that is what we are monitoring on a daily basis at present.”

Cllr McMahon thanked David Friel from the environment section of Donegal County Council for their assistance in the ongoing situation.