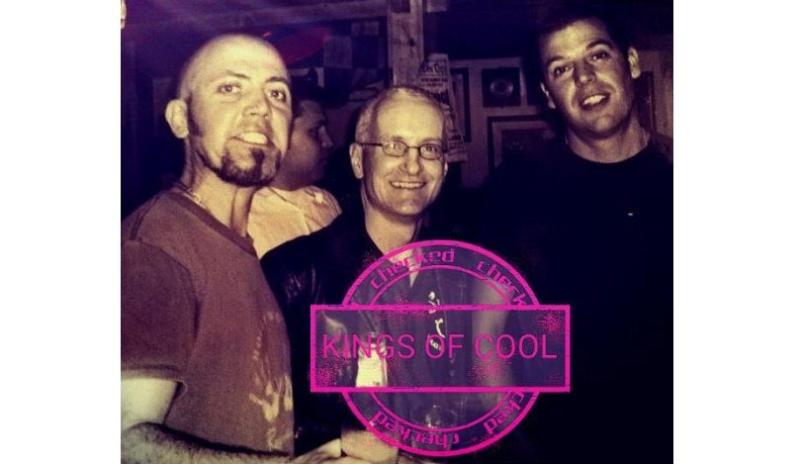 Jason, Michael and Stephen, The Kings of Cool

They say music creates a sense of belonging and participation.

It’s an antidote to the growing sense of alienation and isolation in society in general – even more so now we are being asked to actively practice social distancing and isolation.

Proof, if needed, can be found on our very doorstep thanks to some fabulous tunes coming out of Ballyshannon from what you might call a newish band, The Kings of Cool.

These guys have been working on some brilliant new songs that provide a sublime detachment from the mundane.

The Kings of Cool, Jason Kelly, Stephen Gallagher and Michael Christie have been friends for decades at this stage and have played music together on and off all through.

Most people around Donegal would best remember the boys from their days in the band Georgia, which had a lot of success back in the Nineties.

Although they have been involved separately in many other music projects over the years, they always stayed in contact and often met up for a jam.

Then in Summer 2019, the boys came together for a Thursday night residency in the famous Dicey Reilly’s pub, Ballyshannon, and The Kings of Cool came into being, playing an eclectic mix of guitar pop, honky tonk country, and jazz.

The gigs went well so it was planned to play more regularly in 2020, but Covid took care of that. So in the early days of lockdown, when everybody stopped live work and with a chance to take stock and reflect, Michael found the urge to start writing songs again.

The first song to be completed was called Life after Lockdown, and with the advances in technology, the band were able to start recording apart from each other.

"Initially, we thought we would just record the one song and maybe revisit some older ones, but once recording began, more new songs were written both by Michael and Jason, and it all began to take off.

"When we look back now it seems hilarious that we were rushing to finish Life after Lockdown so it could be released quickly, while it was still topical and before the whole crisis would be over in a few weeks, that's how we were thinking back then.

"Anyway Life after Lockdown was released in late June 2020 and we were amazed at the reaction, especially all the support from radio, and in particular Ocean FM and Highland Radio. So we continued on writing and recording, and we realised we could put out a song every six weeks or so.

"Given the speed with which people's attention spans change nowadays, we felt that this would be a good idea, rather than recording songs for an album release...why not just keep on sending out new music constantly, and if someone doesn't like a particular song, no problem, there will be another coming along shortly."

Now we are in the middle of Spring 2021 and since that first song back in June, The Kings of Cool have released seven songs, the last one in mid-April, called Neville Cook.

"We are blessed in that the song ideas are still flowing so this journey has a long way to go yet. One lovely aspect of the recordings is that on certain songs we have asked other musicians to help out, people like Damien McGeehan on fiddle, Sean McCarron on saxophone, Pauric Gallagher on organ and Kieran Quinn on piano, and from chatting to them and others it's amazing how much creativity has been happening here in Donegal, which is wonderful.

For anyone who hasn't heard the band, The Kings of Cool have a Facebook page and all the songs are up on YouTube. And more and more radio stations are playing the music, all over the country, including RTÉ Radio 1.

To give a rough idea of how it all sounds, think Nick Lowe, Squeeze, Willie Nelson, Guy Clark, Steely Dan, Joe Jackson...and of course the Beatles.

As regards the future, the boys don't have any master plan as such.

"Obviously the most important thing is to keep writing songs, and maybe soon to put them together with some unreleased material as an album.
And of course it would be lovely to do some gigs when that all comes back.

"We are actually surprised at how an idea to record one song has snowballed, but we are proud of all the songs released...and very excited at the songs to come."

Well if that doesn't prove that Covid-19 doesn't necessarily have to result in social isolation it's hard to figure what does.

In the face of uncertainty and panic, music is a social balm for soothing anxiety, enhancing community connections and acting in defiance of a threat to community spirit.