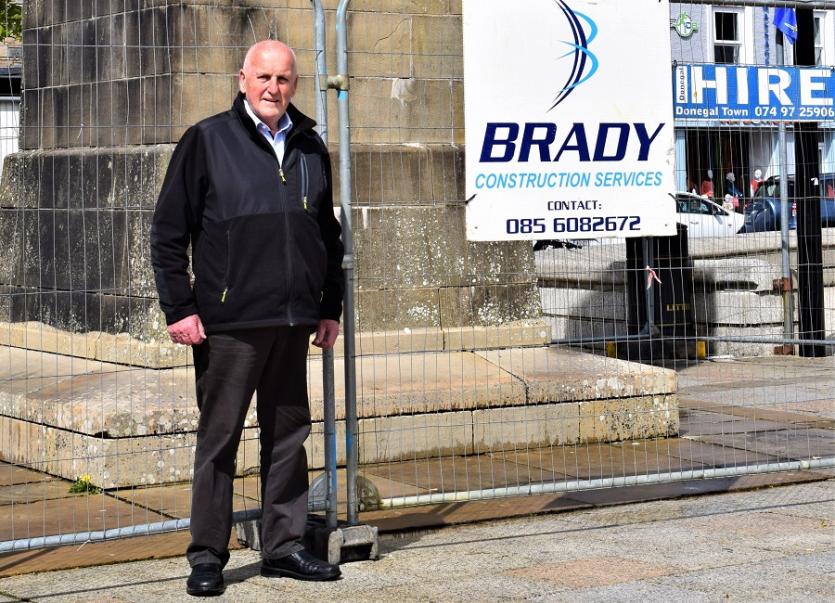 Specialist repair and cleaning work has begun on the Four Masters memorial monument in Donegal Town.

The work is being carried out on the sandstone structure by local contractor Brady Construction. The company was appointed following a tender process earlier this year.

Cllr Tom Conaghan (Ind) said: “This is something I have been working towards since being elected and I am delighted that work has now started.

“I know it is something that a lot of people have been asking about but it is not as simple as just going in and giving it a power wash.

“The monument needs specialist care due to the nature of the stone and we have a responsibility to do the work properly so that it will be there for the people of Donegal Town for years to come.”

A conservation architect has approved the works which will include repointing and specialist cleaning of the protected structure.

Cllr Conaghan said: “This will give a great lift to the Diamond and to the town when it is done.”

Situated on the Diamond where there is a high level of passing traffic, the four-sided sandstone obelisk has become quite dirty and grimy.

The structure was built in 1938. It is skillfully inscribed with a number of beautiful Celtic motifs as well as the names of each of the four authors of the Annals of the Four Masters - Franciscan brother Mícheál Ó Cléirigh and three laymen, Cú Choigcríche Ó Cléirigh, Fearfeasa Ó Maolchonaire and Cú Choigcríche Ó Duibhgeannáin.