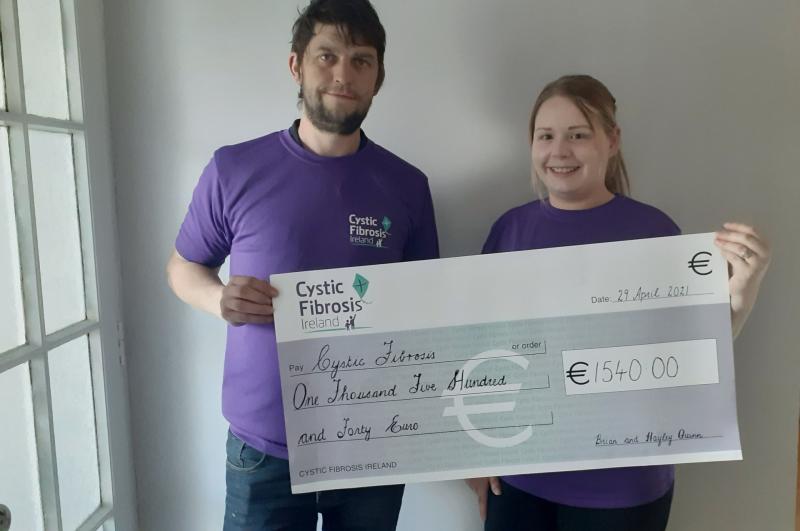 Brian and Hayley Quinn from Convoy

Their daughter, Caitlín, was diagnosed with the condition at five-weeks. She is now eight months old.

Cystic fibrosis is an inherited chronic disease that primarily affects the lungs and the digestive system.

A defective gene causes the body to produce unusually thick sticky mucus that clogs the lungs and obstructs the pancreas, stopping natural enzymes from enabling the body to break down and absorb food.

Approximately one in 19 are thought to carry one copy of the altered gene that causes CF.

With public collections unfortunately cancelled for the second year running due to Covid-19,  the public was encouraged to support people with cystic fibrosis  this 65 Roses Day by donating online at 65RosesDay.ie or helping fundraising ventures like the one undertaken by Brian and Hayley.

65 Roses Day gets its name from the way children often first say the words “cystic fibrosis”.
Ireland has the highest incidence of CF in the world with more than 1,400 people living with CF.

Indeed, the incidence of CF in Ireland among the indigenous population is almost three times the average rate in other EU countries and the USA. Ireland also has some of the most severe forms of the disease.

“We decided to take part in 65 Roses Day to help raise awareness and money for research for Cystic Fibrosis.

“This is something that is close to our hearts as our daughter, Caitlín, got diagnosed with cystic fibrosis at five-weeks old.

“There has been great progress on research with new drugs becoming available all the time to help people who have CF and we would like to hope that someday there will be a cure for CF, for all the CF warriors and of course our own wee CF warrior princess,” said Hayley.