Donegal Annual is on the shelves 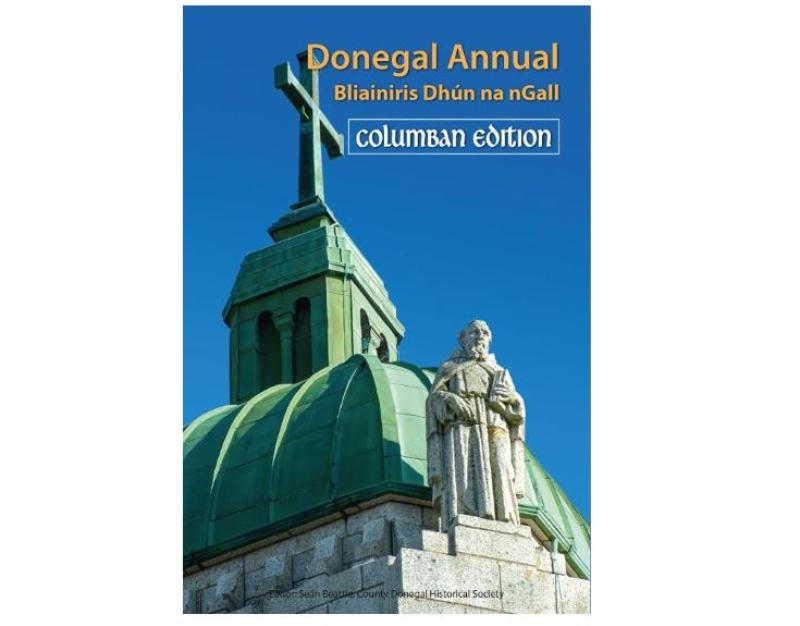 The cover of this year's special Donegal Annual which shows the statue of Colmcille on the Church of the Sacred Heart. Carndonagh, by renowned Dublin sculptor, Albert Power

To mark the 1,500th anniversary of the birth of Colmcille, County Donegal Historical Society has published a special edition of Donegal Annual (2021, no. 73), which is now available.

It is a celebration of one of Ireland’s greatest saints, a man of Donegal birth who became an international icon. Contributors include local authors and established historians from home and abroad.

Origins
Colmcille’s origins in Gartan and his complex family associations are discussed in an interesting article by Brian Lacey, who has published a book on the life of the saint.

Seosamh Ó Ceallaigh presents a detailed synopsis of the folklore and heritage related to the saint in the north-west of the county, while Helen Meehan also records folk tales about Colmcille in the Donegal Bay area.

The saint’s associations with Glencolmcille are scrutinised by Dr Lochlann McGill while Pierce Ferriter discusses recent archaeological excavations in Drumholm and links to Colmcille.

Max Adams, an English historian who is based in Co Durham, places Colmcille in an international context in relation to Iona and Lindisfarne.

Historians dispute some genealogical lineages associated with the saint and this topic is the subject of an extensive article by an American contributor, Tom Cannon.

Legacy
How has the Columban tradition fared over the centuries since his death? The Vikings had little respect for his achievements as revealed in an engaging article by Darren McGettigan.

By the seventeenth century, his reputation was enhanced when the Church of Ireland named its new cathedral in Derry in his honour as evidenced by William Roulston from the Ulster
Historical Foundation.
By the nineteenth century, Colmcille was perceived as a man of significant stature, especially in his native county, and this is the subject of an article by Nollaig MacCongáil, a former Registrar and Vice-President of University College, Galway.

He was admired too in unexpected places. The owner of Glenveagh Castle, Cornelia Adair had a cross erected in appreciation, according to Rev Raymond Blair.
Vincent O’Donnell has an interesting piece of folklore from south Donegal.

In a colourful article, Seán Boner – who is the current president of the society - recounts the remarkable commemorative voyage to Iona in 1963, and in a separate richly illustrated article, he highlights the reverence shown towards Colmcille in some of the great stained-glass art of recent years.

Canon David Crooks recalls the impressive religious celebrations organised by the Church of Ireland in 1963 in which his father, Archdeacon Louis Crooks was a prime mover, the highlight being the voyage to Iona from Derry by curragh.

Literature
Not surprisingly, as a scribe and literary figure in his own right, Colmcille has exercised a powerful influence on some of our great writers.

In an article by Dr Donal Manning, Liverpool University, it is a surprise to read that James Joyce held Colmcille in the highest regard: both men understood the meaning of exile.

From his earliest days in Bellaghy, Co Derry, Seamus Heaney regarded Colmcille as inspirational, as Seán Beattie – who is also the editor of the special edition – reveals. One of Heaney’s last journeys abroad was to Iona.

Seán Boner has carried out extensive research in south-west Donegal on this period.

There are also some new insights on the war in Inishowen, revealed here for the first time, in the previously unpublished papers of the Lanigan family of Carndonagh; three Lanigan brothers were jailed in 1921, according to the owner of the newly-discovered archive, John Reynolds.

With dozens of maps, illustrations, photos, book reviews and charts, the Donegal Annual is strongly recommended reading for everyone who is interested in Colmcille and the War of Independence.

Among the regular features is a bibliography of recently-published books relating to Donegal; Rory Gallagher has compiled this section with assistance from the library staff of Donegal County Council, including Una Matthewson and Frances Crampsie.It is encouraging to see much material being published despite the lockdown.

The Donegal Annual is a veritable treasure house of literary and historical riches and will be in great demand. Copies are on sale in local shops or you can have postal delivery by contacting the Secretary, Mrs Una McGarrigle at unamcgarrigle@hotmail.com