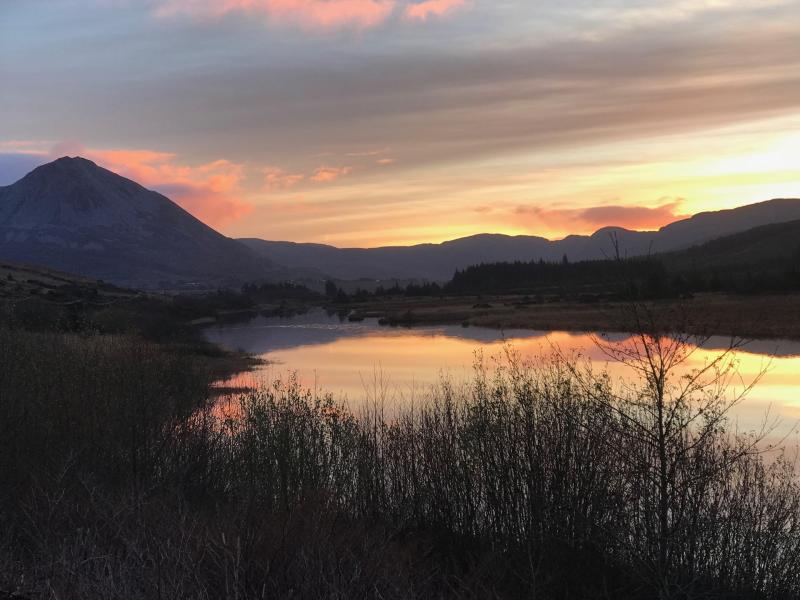 The new Donegal place brand may have been launched to great fanfare but councillors at the Glenties Municipal District (GMD) found that some of the most iconic areas in the south and west of the county were overlooked and felt that it didn’t pay adequate attention to the Irish language.

Donegal Airport
Speaking at the online GMD meeting, Fianna Fáil Councillor Noreen Mc Garvey said she felt areas that deserved to feature strongly were Errigal Mountain, Slieve Liag and the most scenic airport in the world, Donegal Airport.
“I felt there was so much left behind for the west and the south,” she said at the meeting on Tuesday.
She welcomed the fact that a picture of Glenveagh had featured adding: “What was the harm in inserting a picture of the most scenic airport in the world?”

It is hoped that the new Donegal place brand, which is an initiative of Donegal County Council’s new Economic Development Division, will position the county as a great place to live, work, invest, explore and study.

Among the ambassadors that attended the launch were Killian McLaughlin, founder of the Wild Ireland Animal Sanctuary who was joined by Ciaran Harvey and Charlene Kennedy of Pramerica/Prudential, Rosy Temple from Magee of Donegal and Letterkenny Institute of Technology’s President, Paul Hannigan.
Cllr Mc Garvey said the Irish language ambassador, Dónall Mac Ruairí, who was invited to act as Ambassador during Seachtain na Gaeilge ought to have been asked to participate in the event and this would have given the Irish language the status it so richly deserves at such occasions.

Cathaoirleach disappointed with the positioning of the Irish language

The new Cathaoirleach of the Glenties Municipal District meeting, Cllr Marie Therese Gallagher said she agreed with Cllr Mc Garvey’s comments.
She said that she had attended around seven workshops about the branding and said she was disappointed with the ‘positioning of the Irish language.’
She said that if you are talking about the uniqueness and the DNA of the county that surely the Irish language would be to the fore.

Brand developed to showcase all Donegal has to offer

Head of Tourism at Donegal County Council Barney Mc Laughlin said he would bring the comments back to the relevant parties.
The brand has been developed by international place brand specialists OCO Global and Chief Executive Mark O’Connell and will provide an insight on the importance of place branding for places like Donegal especially in the current climate where the growing trend in remote working presents opportunities for locations like Donegal where the superb quality of life is an attractive feature for those looking for an alternative from city living. The launch took place online on April 30. It also included the launch of the new donegal.ie website which is home for the place brand and where all relevant information relating to the new brand will be available.

Speaking after the meeting, Ms Mc Garvey said Údarás na Gaeltachta’s Gteic and the Derrybeg industrial estate should have also been mentioned .”