"It's important to keep the momentum going"

Donegal midfielder says squad will put the pressure on Monaghan 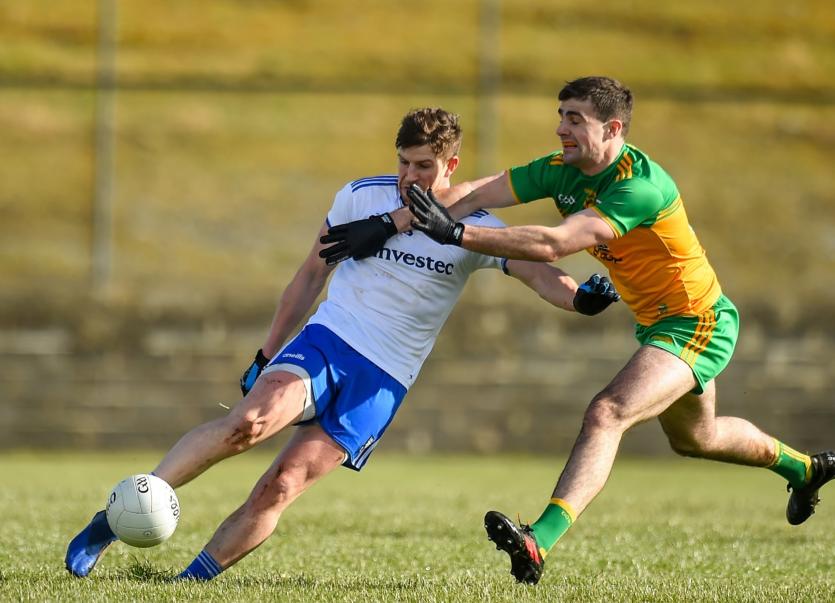 MOMENTUM: Donegal midfielder Caolan McGonagle is hoping his side can defeat Monaghan to make it two wins on the trot. PICTURE: Oliver McVeigh/Sportsfile

Declan Bonner's men hit the ground running at Healy Park in Omagh last weekend with victory over Tyrone in their opening match, and midfielder McGonagle says the players are gunning to keep the winning streak going.

"It was good to get a result," said the Buncrana man. "You go out looking to win every game, and though Tyrone have new managers, they have the same set of players, so we knew it would be a battle.

"It will be just as tough now against Monaghan. We're well used to playing them, so both teams will know what to expect. Hopefully we can keep that momentum going."

It was a particularly sharp and physically fit Donegal side that put on a confident display against Tyrone, and that was without key players such as Stephen McMenamin and Eoghan Ban Gallagher.

And it's that strength in depth, says McGonagle, that will hopefully serve them well in a whirlwind season where the games will be coming thick and fast.

"Declan says that all the time, how anything can happen with injuries this year because of the quick turnaround of matches, and how important it is to have depth in the squad.

"There's fierce competition for places. I got my chance last year and I am pleased I have kept my place so far.
"It was always the plan for me to establish myself in the squad, and I know I have to keep working hard when there's boys like Odhran MacNiallais and Jason McGee pushing to get in."

And there is definitely a leanness and hunger in this Donegal squad this year, who looked extremely sharp despite the fact they have only been back training together for just over a month.

Said McGonagle: "We obviously had to do a lot of training on our own this year before we eventually got together for collective training last month," he said. "We had that last year as well, so I think we were a bit more prepared for it this time.

"The players are in good shape and mad to get going. It was great to get back together. There's some difference between running around Buncrana on your own and getting to meet up with everyone again."

Donegal are now desperate to put the bitter disappointment of last season's Ulster final defeat to Cavan well in the past.
Like last year, only the winners of the provincial final will progress to the All-Ireland semi-finals, so Donegal, with a preliminary round against Down to contend with, are going to have to do things the hard way.

"We didn't do ourselves justice against Cavan," admitted McGonagle, "but that's behind us now. We just want to focus on doing well in the league and not look too far ahead of ourselves."