'How many homes have been infected with mica after 2010?' 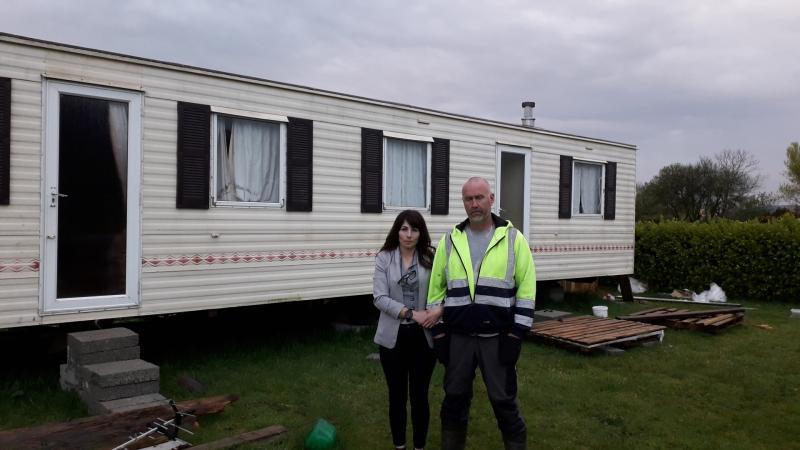 Veronica and Oliver Lafferty, outside the mobile home the family will live in while their home is tossed and rebuilt

In the back garden of Veronica and Oliver Lafferty's crumbling Carndonagh home sits a mobile home.

This is where Veronica and Oliver will live while their mica riddled home is demolished and their new home is rebuilt.

This is where their daughters will live, while studying for and sitting their Leaving and Junior Certificates respectively.

Oliver said he knew in 2007 “something wasn't right” with their Tullyarb home.

He recalled: “There were vertical cracks in the corners and there was a horizontal crack at wall plate level at one of the gable end walls. I couldn't figure it out because I knew it wasn't the foundations.

“Initially, I thought the wooden floor upstairs was swelling and shoving out the gable wall, but it wasn't, it was actually sitting back from it.

“I got a phone call in 2010. I was driving my digger and a neighbour phoned to say, a couple of other neighbours had been taking the plaster of their houses, to investigate the cracks, and they just went through the blocks. My neighbour said to me, 'Oliver, there is something seriously wrong with the blocks in our houses.'

“There were a lot of us taking the case,” Oliver added. “But we were told, 'You will go to court and you will more than likely win. You may end up with a judgement saying they (block provider) are in wrong but you will get nothing'.

“We knew it would take a long time and we would come out with a raw deal. That is when we started pushing for the Redress Scheme, along with Ann Owens and the Mica Action Group.”

Oliver said he has known for the last 10 years his house would have to be tumbled, long before his cores were tested in March 2020.

However, the process has been far from straightforward.

Whenever the results of the testing came back, Veronica and Oliver's engineer made the recommendation their house be tumbled and rebuilt.

“Right away,” Oliver said, “he was told we needed more tests. We understood you only needed a second suite of tests if the first set were borderline but our engineer was told there was no way our house was being tossed based on the results of the initial tests.

“That kept us back about six months. Everything has been and is slow. In September 2020, we applied for planning permission, which has recently been granted.”

Living in a house, with cracked and falling plaster revealing disintegrating blocks, where mice can run freely into the cavities, Oliver was incensed by the widely reported May 11, 2021 statement released by the local firm who many believe are at fault for the crisis.

The blocks used to build his family home came from the quarry in Buncrana.

Oliver explained: “In that statement, they (block provider) said they are satisfied that they 'always supplied concrete blocks that met with national product standards and complied fully with all national building regulations.'

“They added: 'The potential for these problems to arise was never reflected in the Government's regulatory standards on masonry blocks until relevant changes were made in 2013 to increase block strength requirements and eliminate similar issues arising in the future.

“The Government has indicated its responsibility for addressing failures in previous standards in launching the current redress scheme.'”

Oliver and Veronica described the statement as 'disingenuous'.

Both were at pains to point out the regulations governing blocks, for the purposes of building houses, were enshrined in Irish law in 1949 and were never, ever repealed.

Oliver elucidated: “In 1949, Daniel Morrissey [Fine Gael] who was the Minister for Industry and Commerce from 1948 to 1951, put regulations into Irish Law, with as Statutory Instrument, specifically for the manufacture of concrete blocks for the purpose of building houses. That is how specific it was.

“The 1949 law stated that 'the aggregate must be hard, strong and durable and it must not contain harmful materials, such as Mica, in amounts that will adversely affect the concrete'.

“The 1949 law actually specified an amount. It said, 'The coarse aggregate shall not exceed 1% mica'. That is written down in law.

“It also said, 'Aggregate shall not be of the type that is liable to suffer from the action of frost as in freeze thaw action'.”

He added that he had told every single one of the many Government Ministers who visited his home this information.

Oliver said: “In 2016, the Government established Expert Panel on Concrete Blocks held there was a bit of confusion around the 1% mica figure. I was told by one expert that it was not in the legislation any more.

“However, what actually happened was, they took out the wording '1%' and left in 'amounts that will adversely affect the concrete' in subsequent legislation. However, the original 1949 Act was never repealed, so the 1% specification still stands.

“The Expert Panel put this to the National Standards Authority of Ireland (NSAI).”

On October 20, 2016, the NSAI told the Expert Panel, in a letter: “As far back as 1949, Statutory instruments for blocks and aggregate listed mica and as a harmful impurity and said that the quantity of such impurities and coarse aggregate shall not exceed 1% maximum.

“Following from our consultation, we confirm that NSAI has the following understanding of the requirements.

“SI 288 of 1949 (IS 20) part II, 3 (a) limits harmful impurities to 1% in coarse aggregate passing a Number 200 sieve, according to the test method specified in Annex A Determination of amount of material passing a Number 200 Test sieve.”
Oliver said: “Effectively, the NSAI confirmed that the 1949 limit of 1% is still applicable to this day.

“In 2010, Donegal County Council and the block providers were both notified about the houses, the crumbling blocks and the levels of mica and nothing was done.

“Where were the people who were supposed to be looking after the quarries? From 2010, it was obvious there was a problem.

“I would like to know, many houses have been infected with mica after 2010? That is the real scandal.

“I have asked every Minister I ever met on the mica issue, why they are allowing public money to be spent buying these products, yet they are unable to assure me the products are being sold do not contain mica.”