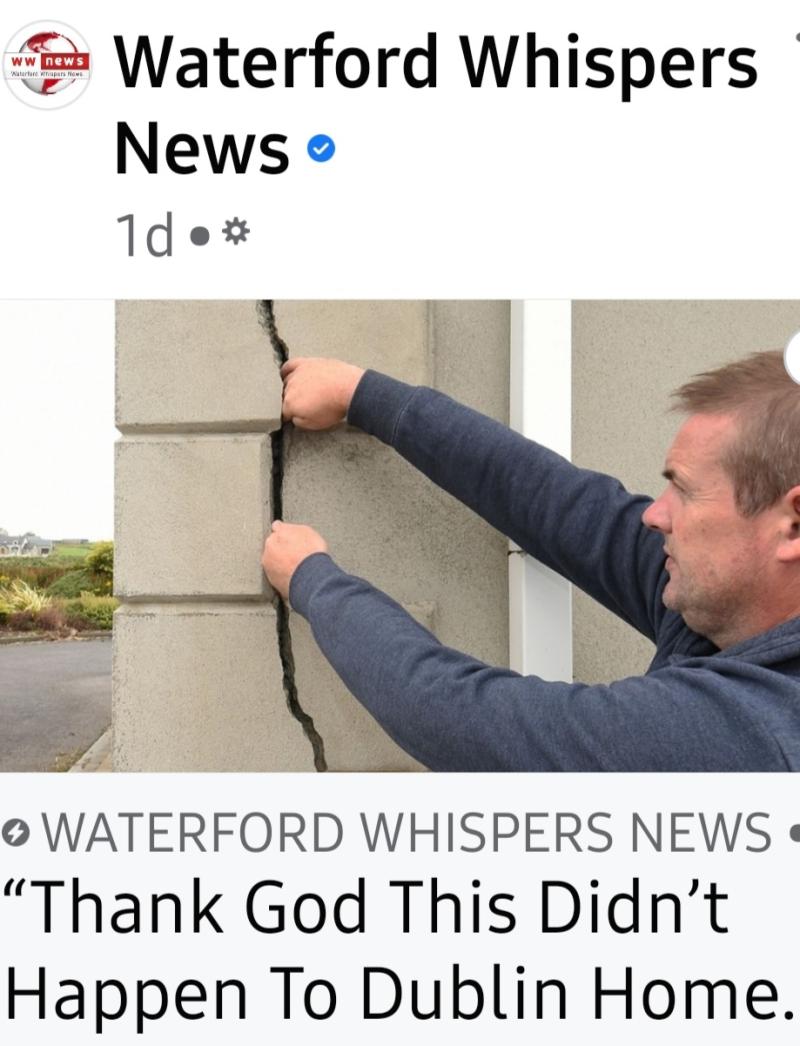 The mica scandal has been extensively covered in the local and national media, with affected families garnering international support.

It is now the subject of biting satire on the Waterford Whispers News site.

Shared alsmost 200 times, the bittersweet post begins: "'Jesus, can you imagine if Dublin homes were built using this craic, we’d never hear the end of it,'” a relieved government minister told a closed meeting today on the current, albeit unimportant, scandal involving Donegal homes, 'we’d probably lose all our voters if it happened here, thank Christ no one gives a shite about that place. Hopefully this pathetic excuse for a scheme will shush them for a bit until it’s the next government’s problem.'

"The scheme in question, the Defective Block Scheme, was launched in January 2020 but affected families have said it is lacking and have questioned why they were not granted the same treatment as families affected by pyrite in the east of the country.

“'They do know where they’re located, right?'” another government advisor retorted to the point, scoffing at the thoughts that someone from Donegal has some uninformed notion that their home is somehow as important to their Dublin counterparts, 'surely they could just build another home, sure they cost nothing up there.'

"It was found the mineral muscovite mica was present in the concrete blocks used to build a large number of properties in Donegal, a substance which impacts on the cohesion of the cement content in the block and therefore the durability of the walls, leaving them to deteriorate very quickly, forcing owners to move into rented accommodation while still paying off a mortgage.

“'We’d probably have to launch a national emergency plan if that was Dublin, ha-ha, imagine the money it would cost us, we’d be torn apart in the press and even worse, actually have to act on it like we cared,'” ministers at the closed meeting agreed, before heading to lunch for a couple of hours before the next meeting on how to keep people renting and living in the overpriced capital now people are leaving for rural Ireland.

“'I just hope they don’t all move to Donegal,' they all laughed."