Many of the families affected include SIPTU members and former members 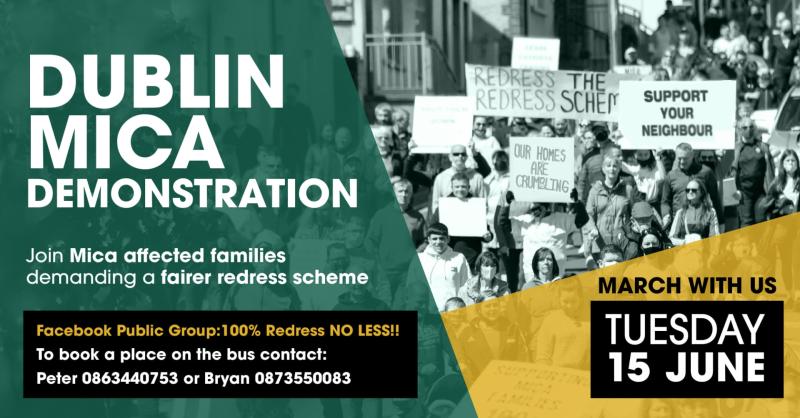 Mica supporters on their way to Dublin this morning have welcomed the news that Ireland's largest trade union, with around 200,000 members, has backed their fight for justice.

SIPTU has supported the call for 100% compensation for homeowners affected by the mica homes scandal in advance of a today's protest in Dublin by those impacted by the failure to adequately monitor compliance with construction standards.

From there, they will walk to Leinster House, Dublin 2, for a demonstration between 3pm and 4pm.

SIPTU organiser, Kevin McKinney, said many of the families affected by the mica home scandal include SIPTU members and former members.

"In Donegal, Mayo, Clare and other parts of Ireland more than 5,700 families are watching their homes disintegrate before their eyes.

“This is due to the high level of mica contained in the concrete blocks used to construct these homes. Mica is a mineral that absorbs water and causes blocks to disintegrate and buildings to crumble.

"Irish regulations state the mica content in the aggregate used in the production of concrete blocks shall not exceed 1%. Tests on houses in Donegal show some blocks contain more than 50% mica.

“There has been a clear failure to adequately police compliance with the regulations governing construction materials. These regulations are supposed to protect families from the issues that thousands are now having to endure.”

He added: “Families have no choice but to continue to pay a mortgage for a home that is worthless. Many have been forced to move out of their homes due to them becoming unsafe, with some resorting to living in caravans as they cannot afford to rent.

“The Government has proposed a completely inadequate redress scheme for the homeowners affected. The owners of these homes are not at fault in anyway and should not be out of pocket for carrying out the remedial work required. What is needed is a commitment from the Government to provide the homeowners affected with 100% compensation for carrying out the work necessary to make their homes inhabitable,” he said.