Justice: Donegal's battle for mica redress descends on the capital 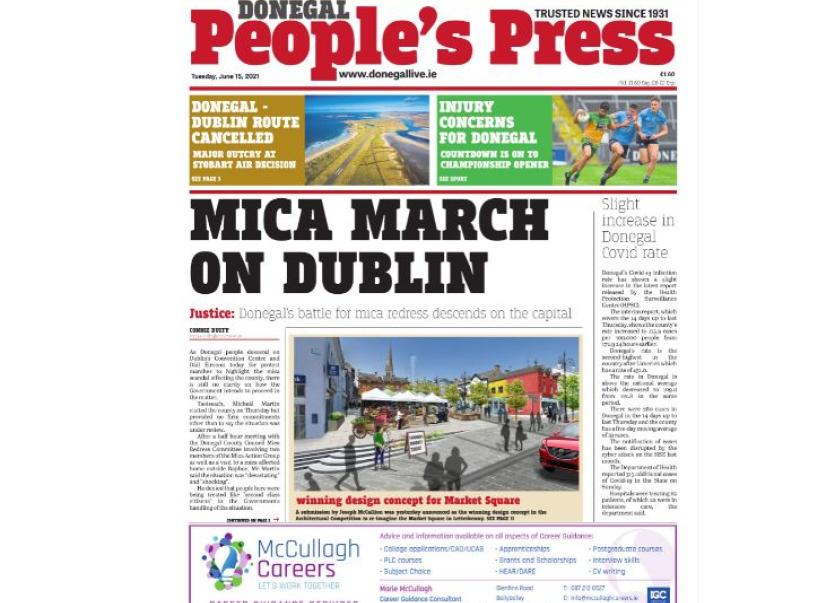 As Donegal people descend on Dublin's Convention Centre and Dáil Éireann today for protest marches to highlight the mica scandal affecting the county, there is still no clarity on how the Government intend to proceed in the matter.

Taoiseach, Micheál Martin visited the county on Thursday but provided no concrete commitments other to say the situation was under review.

After a half hour meeting with the Donegal County Council Mica Redress Committee involving two members of the Mica Action Group as well as a visit to a mica affect home outside Raphoe, Mr Martin said the situation was “devastating” and “shocking”.

He denied that people here were being treated like "second class citizens" in the Government's handling of the situation.

This however has done little to clam the storm clouds brewing for all the major political parties.
Minister for Housing, Local Government and Heritage, Darragh O'Brien was parachuted in to try to calm the anger when he spoke on local radio yesterday.

He described mica as being “an absolute scourge” adding those responsible needed to be held to account.

“We have to look at how some of the cost in borne not just by the exchequer but by others so we've asked the Attorney General to look specifically at this issue. I don't want that delaying any potential changes and it won't, but I think there is a matter of justice here too; there's a matter of fairness to the exchequer if you look at how residents and indeed the State have been treated by insurance companies, by bond insurers and indeed by producers.

“We have already estimated, and this is probably conservative, €1 billion euro - I would say it will be more - so any changes that we make which I want to work with the group to agree to make sure that the scheme works will mean that the costs will be above that,” he said.

The minister would not commit to any indication in relation to contributions from mica home owners to the scheme saying he did not want to be setting any false timelines or objectives because the various issues were all on the table.

“I am hoping we can come back in a matter of weeks with revisions that can be agreed.
It is understood Coalition party leaders were expected to discuss the issue at a pre-Cabinet meeting yesterday evening, on the eve of the demonstration.

It is understood officials are examining a scheme which would allow for 100 per cent compensation, with the amount capped.