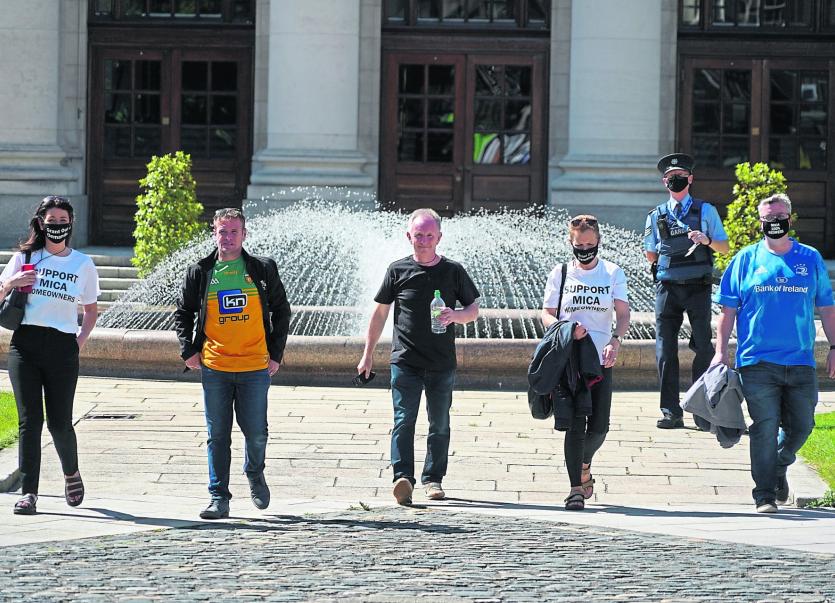 The Mica Action Group says it is frustrated that it has not received a start date for the  working group which is being established to find solutions to the mica crisis that can be brought to the Government by the end of next month.

Minister for Housing Darragh O’Brien announced the formation of the working group ahead of last Tuesday’s demonstration in Dublin by homeowners, mostly from Donegal and Mayo, who are calling for 100% redress in the defective blocks scheme.

The working group is expected to report by July 31. Homeowners in Donegal and Mayo have made nominations for the six negotiating seats on the working group, three from each county.

The rest of the committee is expected to be made up of officials from the two local authorities and the Department of Housing, Local Government and Heritage.

The delegations from Donegal and Mayo first met last Friday and the terms of reference for the working group have been agreed.

The Donegal representatives on the working group will be Michael Doherty of the Mica Action Group as well as homeowners made up of  Paddy Diver along with Eileen Doherty and Ann Owens, who will be sharing a negotiating seat.

Ms Doherty said  the representatives from the two counties have met to discuss the invite from the department and to discuss the terms of reference. They had been expecting details on the identity of the working group members as well as the format and schedule to be finalised this week.

“We are making sure we are doing background research. The key thing is we are looking at all the issues that are similar in both counties and putting together a comprehensive list of issues so we are ready when we are invited to start.

“At the end of the day we are looking for equality, looking for fairness to be afforded to the people of Donegal and Mayo and I don’t think we can accept less than 100% redress, quite simply.”

Speaking on Wednesday, PRO of the Mica Action Group Michael Doherty, who will sit on the working group, said the group was disappointed and concerned that a start date for the committee had not been finalised.

“All they [the department officials] had to do at this point in time was to set a date, should it be Thursday or Friday. I am just a bit surprised that hasn’t happened. We have asked. I don’t know if week one will actually happen now or not, and if not, that is a week of the allocated time wasted.

“From the flurry of activity there was on the Sunday before the march when he [Minister O’Brien] actually made contact with the Mica Action Group, when he was keen to get answers as soon as possible - there has been nothing since and that is somewhat concerning.”

Mr Doherty said the group would “not get too excited about it yet” but they are frustrated about the delay.

“I think we could have been told at least whether it was going to happen this week and that hasn’t happened.”