"Do they think we are eejits? 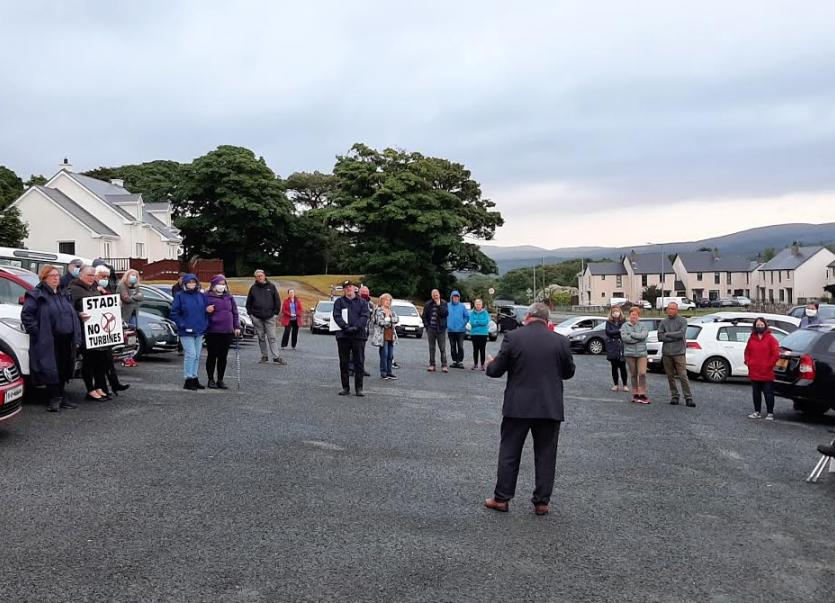 Angry locals have vented their upset and frustration at a proposal to erect 23, 200 metre high, industrial wind turbines in a number of townlands on the eastern bank of the Gweebarra River SAC between Doochary and Shallogans

Over 100 people gathered for a socially distanced meeting in Leitirmacaward church car park on Thursday night to voice their concerns and objections to the proposed Cloghercor wind farm development.

They represented towns, villages and rural communities opposed to any further wind farm developments in their areas.

The proposal is being put forward by the Danish company Ørsted and Coillte.

Organiser Patricia Sharkey of the Gweebarra Conservation Group said locals were being tortured with people calling to their doors in Covid times promoting something they didn't want in their area.

"We are having no turbines here in Gweebarra, Graffy, Fintown, Doochary or Glenties, they can forget about it."

She claimed the proposed turbines were going to be higher than the combined height of the Spire in Dublin's O'Connell Street, Liberty Hall plus 30 metres on top of that.

She slammed the way various wind farm promoters had dealt with the local community saying around 50 planning applications had been lodged with Donegal County Council within a 20km of Leitir in the last ten years.

Some had been withdrawn, some adapted, some extended but all done in order to frustrate and confuse, she said.

"Do they think we are eejits? Who wants to drive from Doochary to Glenties with turbines on either side of the road, it's not happening.

She also criticised Donegal County Council's role allowing wind farm development in one of the most scenic areas of the Wild Atlantic Way adding this flew in the face of its efforts to promote Donegal as a tourism destination at every level.

Another speaker, Joe Brennan, outlined the various attempts to develop wind farms in the areas over the years and highlighted the council's failure to implement a wind farm policy in its county development plan for years leaving it open for multinationals to come in and foist these huge developments on rural Donegal.

Only one councillor from the Glenties Municipal District attended the meeting. Sinn Fein's Cllr John Seamais O Fearraigh said he supported the locals and promised to raise their concerns at council level.