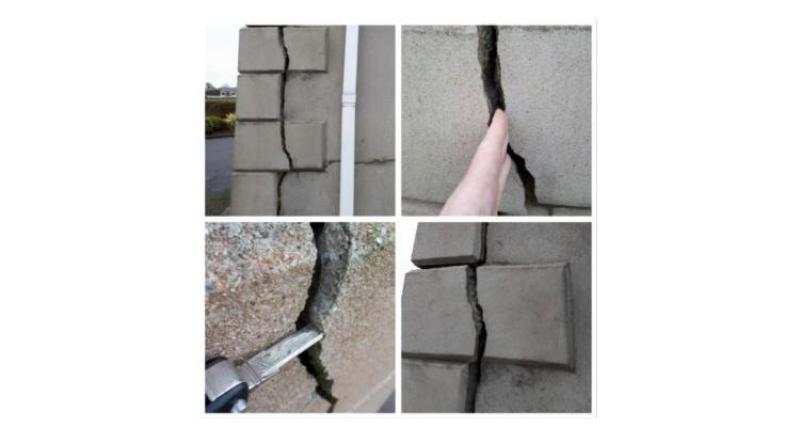 A chartered engineer with 50 Donegal clients at various stages of the Defective Concrete Blocks Grants Scheme has gone public with his concerns about the process.

County Derry based, Dr Ambrose McCloskey, is on the Engineers Ireland Register of Chartered Engineers with the “necessary direct professional experience, competence and specialist training to assess dwellings in accordance with I.S 465:2018 protocol”.

I.S. 465:2018 protocol is the standardised protocol for determining whether a building has been damaged by concrete blocks containing excessive amounts of deleterious materials such as Mica.

Dr McCloskey said unless changes were made to the Scheme, he would not be taking on any new clients and would be withdrawing from the Register.

In a letter to his fellow engineers, Dr McCloskey said he had previously outlined his concerns in writing to a Councillor on Donegal County Council, Engineers Ireland, and other engineers on the Register. He added that several other register engineers shared similar concerns.

Dr McCloskey said: "The fundamental issue, as I see it, is that not enough is known about the exact mode of degradation of the blocks in order to recommend (with any certainty) the partial fixes in the Standard.

“Engineers should always strive to be black or white and not leave grey areas or ‘maybes’ behind. I believe that, as it stands, this scheme will leave too many questionable fixes behind.

“Given the huge sums of money at stake and the major upheaval and stress for so many homeowners, more consideration has to be put into finding the correct, long term solution. It is likely going to take at least 10 to 15 years to carry out the remedial works in Donegal.

"The worst affected houses and those deemed in a dangerous state should be demolished without delay. There are many houses with severely compromised masonry safety factors and these need action taken as a matter of urgency,” said Dr McCloskey.

Dr McCloskey said he and his fellow engineers were now seeing “hundreds” of test results, which are being examined by geologists and specialists.

He said: “There is now more information available to help make better informed decisions on the correct path to be taken.

“It would seem that some engineers are of the opinion that the degradation we are seeing in Donegal is purely a mechanical issue and only caused by freeze thaw action. I do not believe that to be correct and that claim would also seem to be at odds with the introduction paragraph 0.1 of the I. S. 465 Standard. From what I have seen, I am firmly of the opinion that there are other mechanisms happening.

“It would appear that little seems to be understood on how the concrete strength is actually affected by the free mica, other than it is significantly reduced. Some engineers' opinion is that the free mica in the cement paste, as it reacts, has no influence on the chemical reaction taking place. There are many publications which conclude that the presence of free mica, in increased quantities, in the cement paste significantly reduces the concrete strength – which would suggest to me that the free mica must be influencing the reaction of the cement phases.

“Indeed, I S 465 itself cites one of the adverse effects as ‘chemical interference with the setting of cement’. It is unclear if this continues to influence in the longer term. I am unaware of any definitive research either way. It has been suggested in published research that damage even may be caused by leaching in weak, porous concrete as a result of the presence of high levels of mica,” said Dr McCloskey.

Dr McCloskey noted geologists had also alerted people to the presence of pyrrhotite (an iron sulphide similar to pyrite) in the majority of samples, at levels beyond what would be deemed allowable in aggregate for concrete.

He said that Pyrrhotite has been the cause of a similar structural problems in several other parts of the world.

Dr McCloskey added: “In simple terms, any course of remedial works short of a complete demolition will mean that potentially degrading blockwork will remain, and will be subjected to moisture and potentially oxygen, within the structure (most notably within the internal sub structure supporting the house).

“We do not know how this will continue to perform. As such, there is, in my opinion, still a likelihood of further structural deterioration in the medium/longer term. Anecdotal evidence from numerous homeowners who rebuilt an outer leaf of their own accord in the past few years would also suggest that there may well be future issues.

“With the exception of a full demolition, no guarantee or warranty will be provided to the homeowner by the Chartered Engineer, with regards to the longevity of any remedial works, or the structure as a whole. I am not convinced that all homeowners understand the ramifications of this,” said Dr McCloskey.

“Will mortgage lenders allow home loans to be drawn down on dwellings with potential future deterioration? Be this by the existing or a potential new owner. The Mundic issue in Cornwall would suggest not. If not, then houses are only saleable to cash buyers.

“The property value will undoubtedly continue to be blighted due to the partial remediation. Current mortgage lenders seem to have no involvement in the scheme. They are effectively stakeholders in the dwellings. Are clients expected to consult with mortgage lenders regarding demolition (of a property over which a financial institution has a charge) or remedial works? Should the mortgage lenders be contributing towards the costs?”

Dr McCloskey believed Engineers could not let financial issues guide what they would recommend. He said the recommendations should be based on proven science and engineering principles.

He said, at present there did not appear to be enough proven science to allow the partial fixes to be recommended with any degree of certainty.

Dr McCloskey added: “Many homeowners have their preferred remedial option constrained as they cannot afford to add to the grant to complete the rebuild option.

“In order to allow the correct Engineered solution to be carried out, the financial cap needs to be removed – possibly a floor area rate would be a better solution. Homeowners are being asked to contribute to the costs of a remedial option on their dwelling, they should be aware that in many cases they are contributing to something that is not a final, indemnified, solution.

“Clearly every situation differs and demolition may not be feasible for everyone. However, it would seem that many homeowners have been poorly informed as to the limitations of the other remedial options. The majority seem to believe that once they engage with the Scheme, they will ultimately be left with an unblighted dwelling which will be a long-term asset and have a design life in the region of 100 years.

“There are differing opinions, but I believe, as it is currently, a lot of homeowners will be left with a dwelling with a blighted value and a question over the structural integrity that they can only hope will last another 15-20 years without significant deterioration,” said Dr McCloskey.

He added families had “major decisions” to make and Engineers and advisors needed to be sure they were fully informed and aware of future consequences of any decision made now.

Dr McCloskey concluded: “After being fully informed, some homeowners may take the pragmatic approach and see the house as simply a roof over their head and if it does them their day, they are satisfied. Others do not see their house as that.

“There were a significant number of Engineers who attended the I S 465 Training Course. Some have decided not to pursue works in this sector and many more are currently considering their options in whether to remain or leave the scheme.

“It would seem that the unknown is what appears to be driving this decision and I suggest further collaboration between the Engineers who remain on the scheme and Engineers Ireland and / or the Working Group should take place without delay.

“This collaboration, to take a format which should include professional Geologists, will further inform the professional stakeholders in correctly deciding the most appropriate remedial option, which may or may not be in line with the current Standard. The concerned Local Authorities and their representatives should also form part of the collaborative group. There have been reports of Council employees questioning the recommendations of the Engineers/geologists, which is worrying.

“In addition, the authorities need to ensure that robust measures are in place to control the quality of the blocks used in these remedials to ensure that the same issue does not occur in the future. If foundations are to remain in -situ, testing of these would be advisable,” said Dr McCloskey.

Dr McCloskey was also of the opinion that there would be a “severe shortfall” in engineering and construction people-power to conduct this scheme, particularly when the construction work started.