Population of Letterkenny wiped from the map - claim

Letterkenny Rally for Life this Saturday 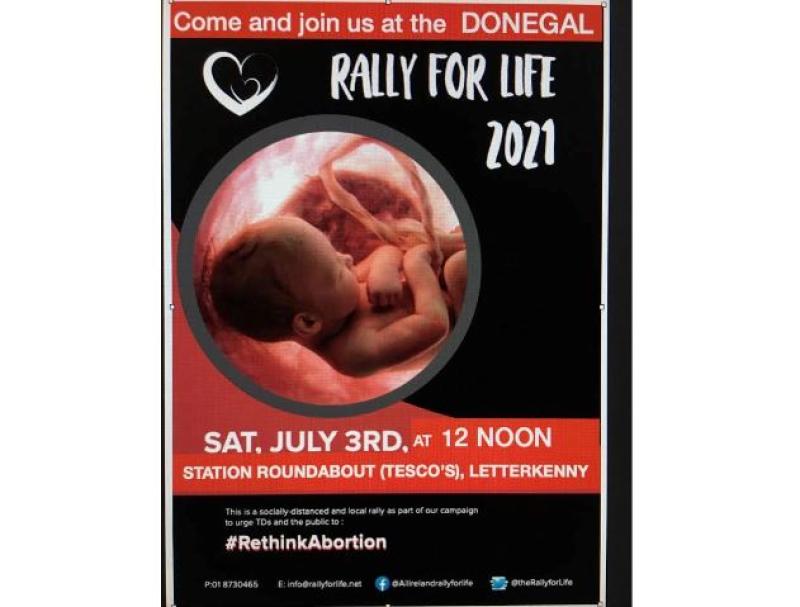 With the never-ending lockdown making this year’s large Dublin demonstration impossible, Pro-Life campaigners are keen to maximize the effect of local rallies up and
down Ireland.

Accordingly, Donegal Pro Life have invited everyone to show their support for the Protection of Life of the Unborn Child at a local rally on 12 noon, Saturday, July 3 at the Station Roundabout, Letterkenny. This assembly will be held under government Covid-19 guidelines.

Margaret McGeehan, chairperson for Donegal Pro Life, said: “We will remember all those who have lost their lives since the repeal of the 8 th Amendment and also those who will be aborted in the future.

"These people will never have a chance to experience life, they won’t have the chance to meet their mum or dad, brothers or sisters, they’ll never have the opportunity to enjoy an education and friendships, play for their local GAA or
experience 80 plus years of life’s challenges and joys.

She added that the majority of voters in Donegal rejected the call to remove the right to life of the unborn child from the Irish Constitution in May 2018, as did over a third of voters
nationally while another one million didn’t vote at all in the abortion referendum.

"Since then, the Irish Abortion Clock estimates that over 15,000 abortions have been carried out in the Republic of Ireland since legislation of widespread terminations was
introduced in January 2019. In short – in just two and a half years – the equivalent of the population of Letterkenny has been wiped from the map!

"So much for Leo Varadkar’s and Simon Harris’ pre-referendum statement that the tragedy of abortion would be ‘safe, legal and rare," said Ms McGeehan.

She added: “We set the blame firmly at the feet of politicians who continue to call for further relaxation of abortion laws and who refuse to introduce pro-family policies or deal with the massive housing crisis on our doorsteps; most women seeking abortions do so because of financial or accommodation problems.”

Saturday’s planned Rally For Life comes on the back of last week’s successful High Court case against the National Maternity hospital and five consultants taken by Rebecca Price and Patrick Kielty, whose baby was tragically and unnecessarily aborted after being mistakenly diagnosed with a “fatal foetal abnormality” in March 2019.

This case highlights a dangerous trend to push parents to abort their child even when a poor prognosis is made by so-called health experts.

The Dublin couple had previously said that they felt completely abandoned by the State because of what they believed was foot-dragging by the hospital and other parties in regard to a full inquiry into the case.

Peadar Tóibín TD has claimed the response to the case by the previous Minister for Health, Simon Harris, was “shambolic” and that politicians wanted the case swept
under the carpet.

The Aontú party leader said: “A public inquiry is needed into the abortion of a healthy baby in the National Maternity Hospital after a misdiagnosis. Changes must be made to
ensure that nothing like this ever happens again. I believe that there should be a full public investigation into what happen and that health service is reformed to ensure that
this does not happen again.”