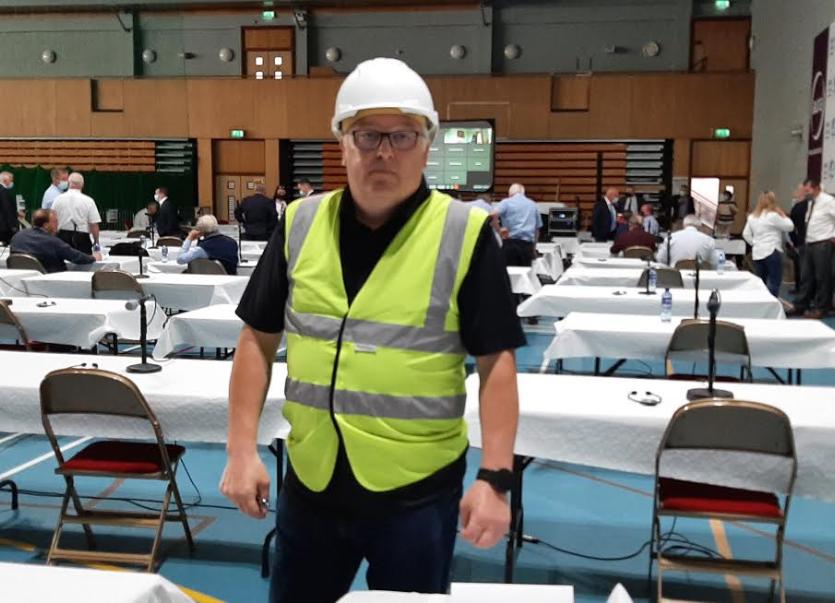 Controversial councillor, Frank McBrearty Jnr has warned he will use information he was getting from council whistleblowers to expose any corruption or wrongdoing associated with the current mica scandal.

He was speaking at the start of the council annual general meeting which was held in the Aura Leisure Centre in Letterkenny.

Cllr McBrearty raised a point of order at the start of the meeting in which he said he wanted to know, in the interests of public safety, why they were holding the meeting in this particular building.

"This building has mica and possibly pyrrhotite and I want to know why Donegal County Council is paying €5,000 for sitting in a building that's not safe.

He added he wanted evidence the building was safe and said he was deliberately wearing a hard hat and hi-viz vest because of his fear of the crumbling building.

"I'm wearing this today because this is what all of us are going to be wearing all over the county. We're going to have to walk around our own homes with hard hats on. Every single person in here should be wearing a hard hat the same as me.

"Part of this building on the outside is falling down. The public are using these facilities and they don't realise they are walking by walls that could fall down on top of them.

"I want to know why the council executive decided to take us to a building that basically should be condemned. It's a building where they are paying €500,000 a year in a mortgage and over €100,000 in gratuity to the Aura company," he said.

He added the building should be closed until it was demolished and rebuilt by the Government.

"I want an answer from the executive today," he added.

Outgoing cathaoirleach, Cllr Rena Donaghey said she would continue with the meeting but promised Cllr McBrearty he would receive an answer at the end of the meeting.

Addressing the new cathaoirleach, Cllr Jack Murray, later in the meeting, Cllr McBrearty said he was delighted to hear Cllr Murray was going to make the mica scandal his top priority for the incoming year.

"I want to make this clear to everyone, I represent 30,000 people in the Lagan and Finn Valley and an organisation called Donegal Lives Matter Justice for Mica and the Working Group that has been set up by the Government do not represent us.

"We have two legal teams, one in Donegal and one in Dublin consisting of three senior counsel and one constitutional lawyer, two junior counsels as well as myself as the figurehead and I'm quite sure you will support me to expose the corruption in this county which i have been very good at doing over the past 25 years."

He added he knew Cllr Murray would not interfere with his process like other people had done when he made representations and fought for people's rights for justice in this county.

"This is not a crisis, this is not a disaster, this is the biggest financial scandal and political corruption case in the history of this State.

"I have whistleblowers in Donegal County Council coming to me with information on a daily basis. All I want from you Jack is your support and I know I will get you support," he said.

At the end of the meeting the council's chief executive, John McLaughlin, addressed Cllr McBrearty's earlier point of order. He said they would undertake to take a proper look at the Aura building and bring a report back to the members of the findings within the next few days.

He said he knew there had been work done at the centre due to mica but it had been fixed.

"They have known for a long time that there's been structural problems with this building  and not only that, this building is built on a flood plain so it should never have got planning permission in the first place - something I will be dealing with down the road.

"You have had plenty of time to investigate what is wrong with this building and you haven't done it to date. You are only doing it now because of pressure from people like me."

He added anyone could see there were cracks at the back of the building and repairs had been done to cover these up.

He told colleagues just because one didn't see the cracks right away didn't mean there wasn't mica, pyrite or pyrrhotite.

He explained that pyrrhotite rusts and melts the block tie and was more dangerous than mica.

"I will accept what you are saying but I expect to get results on all the questions that I am asking. I am not going to accept fobbed off answers any longer," he said.