"Money will be used to get justice" - Frank McBrearty Jnr 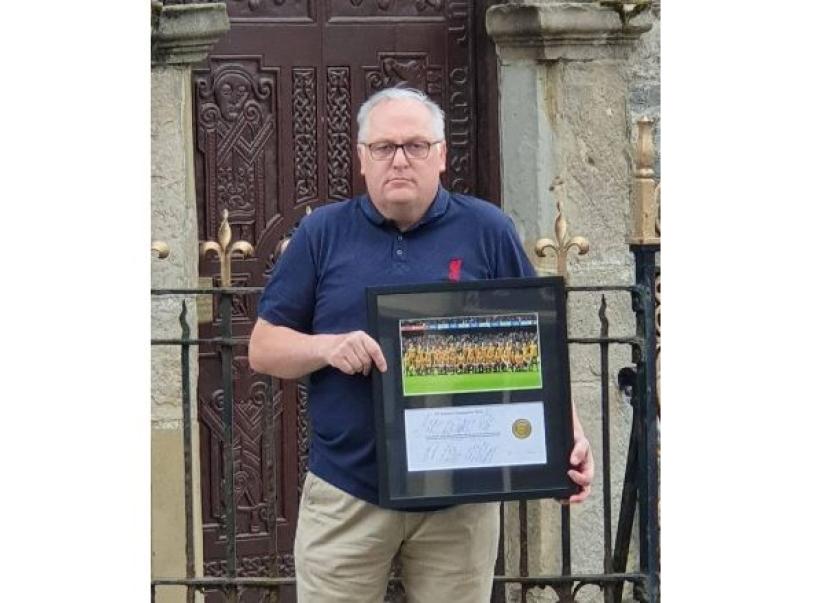 A massive fundraising drive is about to commence to help the Donegal Lives Matter - Justice for Mica group's fight to raise funds for the victims of the mica scandal.

A number of businesses and organisations have pledged their support already and offers of help are pouring in in a daily basis.

A major raffle is being organised and it will feature prizes from all over Donegal and beyond.

The man behind the push, Cllr Frank McBrearty Jnr, is putting up his 2012 framed picture of the Donegal All-Ireland winning team limited edition signed photo of the winning team, pictured just before the kick off in the final at Croke Park in 2012.

This special commissioned print by the Donegal GAA County Board was presented to Cllr McBrearty when he was Mayor of Donegal by the captain, Michael Murphy. on behalf of the All Ireland winning team.

"Half the funds raised will be donated to the mica legal fund and the other half will go to a charity yet to be decided. We have financial commitments from around the world for this fight for justice," said Cllr McBrearty.

He said his brother, Eddie McBrearty from Chicago has already committed $20,000 with a lot more promises from others.

He added the McBrearty family would like to make clear that any donations to this legal fight for justice will not be used by them in their case against the State and that all the funding donated will be used for the many victims of the mica scandal to help them achieve justice.

"We wish to make clear also that the working group set up by the Government do not represent us in this fight for justice. As the weeks and months go by the victims will start to realise that the current redress scheme will not work and any changes to it will not work as the Government is only playing for time and using the working group to deflect attention away from the real issue which is justice for the people of Donegal.

"Everything must be covered by the State, that's all that has to be negotiated and the multiple cases we will issue against the State over the coming months and year will get the victims what they are entitled to and that is justice," he said.

He added they were in the process of creating a database for all the victims that join their fight for justice.

"We are asking all victims to sign up to Donegal Lives Matter -Justice for Mica. Join us on Facebook at Frank McBrearty. There will be many legal battles ahead, but we will win the legal war for justice in the end. Justice will be served and the Government will be dragged screaming and shouting before our courts so that we are no longer treated as second class citizens.

"The only thing we require in this fight is your engineers report which will prove you have mica. When the first case (Frank McBrearty Snr) is won in the courts, it will pave the way on the road to justice for all the victims destroyed by this unjust Government.

"Anyone who feels they are being bullied by the council or engineers who are trying to force them down the road of remedial works only. please contact me for help and advice on e-mail: frankmcbrearty@donegalcoco.ie or my mobile, (087) 2058224.