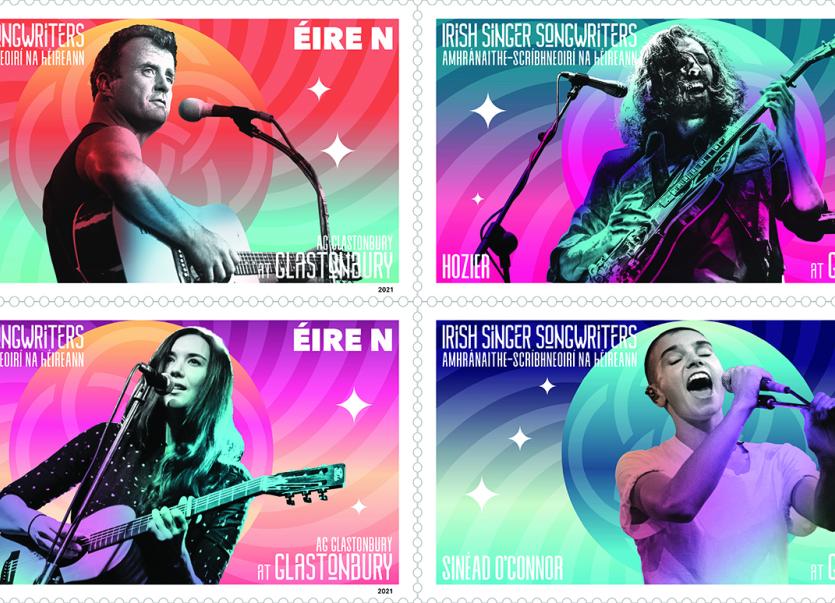 Stamps for Christy Moore, Lisa Hannigan, Hozier and Sinéad O’Connor will be in big demandw

Irish Singer Songwriters, Christy Moore, Hozier, Lisa Hannigan and Sinead O’Connor are celebrated on a new set of Irish Stamps from An Post that were released this week.

Ireland is renowned worldwide for its songwriting and performing traditions and the new An Post stamps honour four of the many Irish artists who have graced stages at the famous Glastonbury Music and Arts Festival.

Designed by Dublin-based Shaughn McGrath Creative, the colourful large format stamps are available in a booklet of four national stamps (€4.40), at all post offices, while stocks last.

A donation will be made for every stamp booklet sold to the Irish Music Industry Covid-19 Emergency Relief Fund, created to assist Irish music creators experiencing financial need.

To mark the launch of the new stamps, music fans across Ireland and the world were invited to a virtual ‘festival’ of unique performances by the featured singer songwriters in Dublin’s GPO last night.

The virtual gig can also be viewed for the next four weeks at anpost.com/festival.

Speaking during his performance in the GPO courtyard,  Hozier said “To be on an Irish stamp is such an honour and in such incredible company too.”  Asked by presenter MayKay how he coped with the Covid-19 Lockdowns he said: ”By re-connecting with the sense of local community, people around me, walking, swimming in the sea, applying a sense of gratefulness to what I could engage with and what I could achieve,  and I hope to take a lot of that with me.”

“To be invited here to sing is one of the great privileges of my working life.”  Describing how he got through the Pandemic, he said: “It’s been difficult, we never really appreciated how well off we all were, in the work that we to do.  There are good sides, I’ve had a full year at home which is something I’ve never had before. We won’t forget it in a hurry, this year that we’ve had”.

Lisa Hannigan said she couldn’t believe that she’d really be on a stamp and that it meant so much during this really tough time.   “I’ve been getting on and doing what I can and hopefully, ploughing some fields and making them productive for future times.  Part of the rhythm of your life, like the seasonality of it, writing and touring.  Touring is nourishing and it fills you up to go and write songs. I’ve missed that part of the cycle for a year now”

The new stamps are among the largest format stamps ever issued by An Post.   “Big stamps for big names, quite fitting for these giants of the Singer Songwriter world”, a spokesperson said.  “We expect strong interest in them from fans of the artists and of music in general, all over the world.   We hope they will help spread a little joy at home and abroad.”