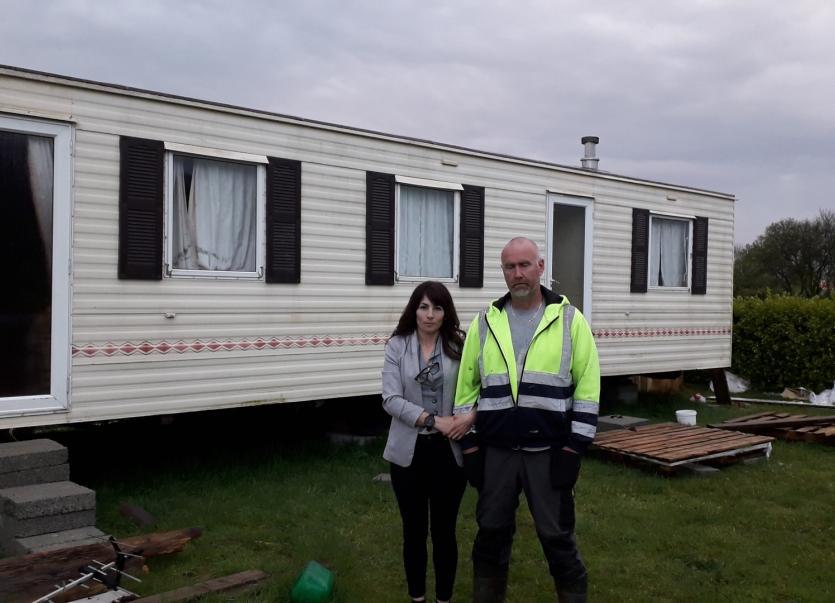 Veronica and Oliver Lafferty, outside the mobile home the family will live in while their home is tossed and rebuilt

Mica-affected Inishowen families who initiated legal cases against Cassidy Brothers Concrete Products Limited in 2013 over defective blocks were told in 2016 the company did not have insurance cover in respect of their claims.

Donegal Live has seen a copy of one such letter from the firm of solicitors representing Cassidy Brothers.

Dated May 31, 2016, the letter said: “We refer to your correspondence of May 23 [2016] and confirm our instructions that our clients do not have insurance cover in respect of the aforementioned claims.”

This information was communicated to those taking legal cases from their own solicitors in a letter dated June 8, 2016, which said: “We refer to your recent meeting with regard to the above matter. Please find enclosed copy letter received … confirming there is no insurance cover.

“The correspondence is somewhat bland and we find it difficult to understand how a company of this type is not insured for manufacturing a defective product.

“On the basis of the foregoing and as discussed, we do intend to bring one of these cases. It would be helpful to meet with you to establish which case we should bring and try and arrange the finance of the same.

“As this is effectively a test case, it would be essential that we prove it to the highest standard, which would involve employing the appropriate expert witnesses, barristers, etc. The costs of the case is not our primary concern, but it is something which we must look at reasonably.”

Oliver Lafferty from Carndonagh was one of the people who pursued a legal case against Cassidy’s.

Speaking to Donegal Live, Mr Lafferty said: “We heard about a neighbour who was asked by the company to sign a non-disclosure agreement with the company, in return for getting the outer leaf of their house repaired.

“They refused and decided to take a legal case, so when we noticed mica in our home, we decided to go the legal route too. That was in 2011.

“We went to our architect and we got an engineer. They took samples from our house, and, although they didn't say it was mica, it stood out in the report that was what the problem was and whenever we found out what mica was, we could see that was the problem.

'How many homes have been infected with mica after 2010?'

“We were led to believe we could not find out whether or not Cassidy's had insurance until our case was registered with the High Court. We registered in 2013 and in 2016 we were told, for sure, there was no insurance.

“I felt as if we were led up the garden path,” he said.

“At that time the whole thought of a redress scheme was on the cards and I believe our case was dragged out till that point, so when we felt there was no insurance in place, there was something to fall back on, so there was less of a backlash. We were very vulnerable,” he said.

Three families took their cases forward, one bungalow and two two-storey houses, one with dash and one without. They had their houses surveyed and were given the cost it would be to replace.

Mr Lafferty did not withdraw his legal case against Cassidy's but believes it is now outside the statute of limitations.
“At the time I would have said, 'How the hell are Cassidy's doing council work without insurance. I don't know,” he said.

Raising the issue of Cassidy Brothers having no insurance at Monday’s meeting of Donegal County Council, Cllr Frank McBrearty (Independent) said the council must now answer the question, “why is it still buying product from Cassidy's?”

Cllr McBrearty said: “Donegal County Council is buying product from Cassidy's, right up until the present day, when the solicitor acting for the concrete company said, in 2016, they had 'no insurance cover in respect of the aforementioned [mica] claims'.

“The solicitor acting for those taking the claims said: 'The correspondence is somewhat bland and we find it difficult to understand how a company of this type is not insured for manufacturing a defective product'.

“That is the most important aspect of that letter. Clearly Cassidy's had no insurance, yet Donegal County Council is continuing to buy products from them, without insurance, that is a public inquiry in itself.”

Donegal Live can reveal all local authority procurement from Cassidy's or any other company, goes through the Killarney-based Local Government Operational Procurement Centre (LGOPC).

LGOPC acts as a central purchasing body under the auspices of Kerry County Council, co-ordinating the establishment of National Framework Agreements and Dynamic Purchasing Systems for the procurement of works, goods and services under these categories to meet the needs of the local government and other public sector bodies.

It maintains a dedicated public procurement portal at www.supplygov.ie that provides an electronic platform for contracting authorities to operate and manage the procurement of works, goods and services from suitably qualified Suppliers in a compliant and effective manner.

It is a requirement under the product procurement process for local authorities, in terms of insurance, that applicants must produce a declaration in hard copy, attached separately to the tender documents and the declaration must be fully-completed, signed and dated.

When Inish Times approached Cassidy Brothers Limited for a comment, a spokesman for the company gave the following: "I've just been advised to issue nothing on this matter this afternoon".