Mystery flight paths: Why were planes flying in unusual patterns over the county?

Unusual plane activity over the centre and west coast of Donegal had people mystified this week, with the peculiar route of one aircraft raising myriad theories of what it could be up to.

Residents who reported the sighting, and were perplexed as to why the plane was travelling back and forth in regimented lines, are worried that this could be the beginning of a mapping operation for future multinational companies involved in wind farm and mining operations.

The main reason attributed to the plane flying in that pattern was some sort of radar exercise, but people couldn't fully explain it.

Yesterday, (Wednesday), however a spokesperson for Coiste Timpeallacht Ghaoth Beara/Gweebarra Conservation Group revealed it had been monitoring this activity for some time.

“We are alarmed at the number of aerial surveys being conducted in and around the Gweebarra River Valley and Bay and around the Donegal coast in general.

“Since March of this year there have been at least six aerial surveys of this valley by high and low flying aircraft conducting LIDAR, QGIS and photographic surveys.

“We tracked down some of the companies concerned and they were very reluctant to reveal who had employed them to photograph our homes to within 6 inches (15cm) and use laser technology to map underneath the ground too.

“However we found out that some of the surveys have been commissioned by "private individuals", by the Danish on and offshore wind company Ørsted and possibly Donegal County Council.”

The spokesperson added the group had documented six surveys in the spring of 2021.

“On July 17 the centre of the county was extensively surveyed by a UK registered aircraft flying at 2,000ft for several hours.

“Last Saturday the Donegal coast from North Mayo to Arranmore Island and from Dunfanaghy to Malin Head was surveyed by a French registered aircraft flying at 600ft while two aircraft with their transponders turned off flew over Glenveagh National Park and up and down the Gweebarra River, greatly disturbing farm animals, wildlife and the local community.”

The spokesperson added that Cllr Niamh Kennedy recently asked Donegal County Council planners if industrial wind turbines were being planned for Donegal Bay but the planners refused to answer during the Council meeting but did confirm no direct enquires had been made at that time.

The spokesperson said it was time for answers.

“Why is this information a secret? Have the council planners commissioned aerial and ground laser surveys? One aircraft owner we spoke to suggested the county council were commissioning aerial surveys for ‘insurance purposes’.

“Is this in response to the Meenbog wind farm disaster we wonder?” 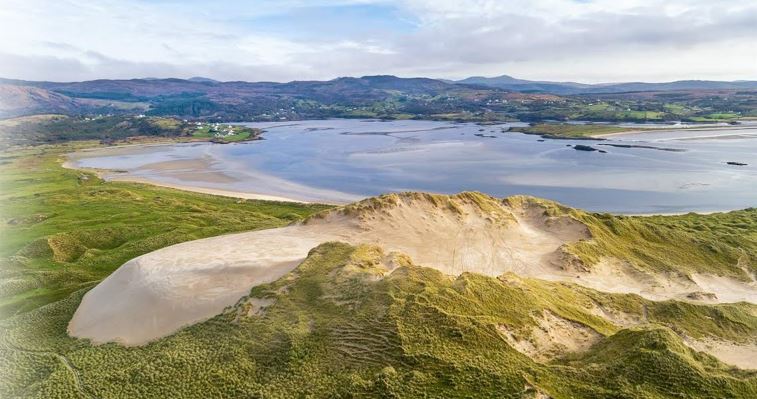 The spokesperson added it was also time for their local politicians to stand up and start asking questions.

“Why are our politicians so silent? Do they think we are mushrooms? People have a right to say what happens to the land around their communities. Donegal does not belong to the planners.

“Public participation in decision making on the environment is the law as stated in the Aarhus Convention - that's something the planners and Danish company Ørsted would do well to familiarise themselves with.”

In relation to the proposed wind farm development in the Gweebarra area the spokesperson added that while no plans had yet been submitted.

“But there has been a lot of activity around the mast site where they intend to raise the mast from 80m to 100m during bird nesting season which is totally illegal," the spokesperson claimed.

“Donegal County Council are not the deciding authority for off-shore windfarm applications (i.e. proposals below the high water mark) and DCC has not been advised of the receipt of any such applications by any other agency,” she said.