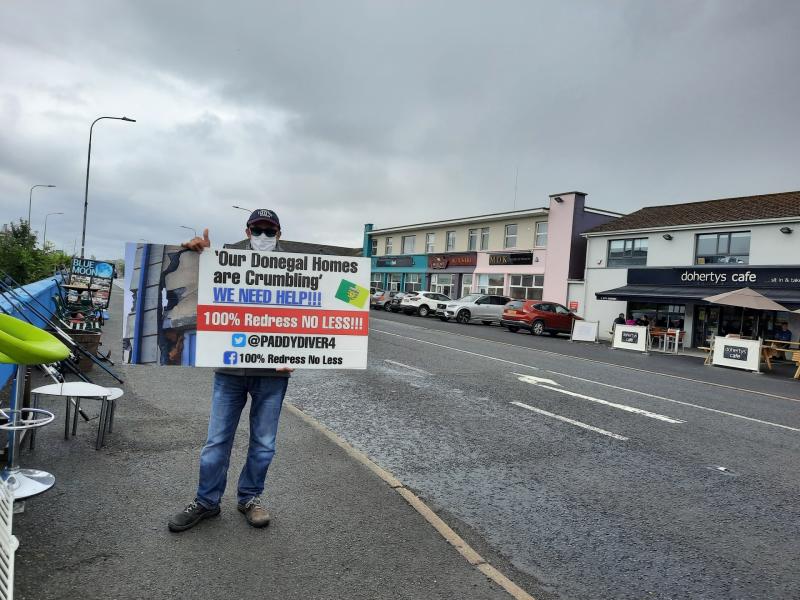 The Inishowen mica campaigner known as the Lone Wolf from Fahan, who stands sentinel at Bridgend every afternoon, has issued an impassioned plea for the Government to visit Donegal.

Speaking to Doneal Live , he said: “I want Michael D Higgins, Leo Varadkar, Eamon Ryan, Micheál Martin and Darragh O’Brien to come down to Donegal and see what you are putting us through. If there is an ounce of decency in you, make sure you come down. We will be waiting.”

The Lone Wolf from Fahan explained he had adopted the name because he felt the Government was treating him like an animal or a number.

He added: “I want to get the message across, ‘If you’re living outside Dublin, your lives do matter, but, according to the Government, your lives don’t matter’.

“My personal situation was that cracks appeared in my house and garage. A plasterer came to see what he could do. My wife said, ‘I don’t think we have mica’, but something in his face told me otherwise.

“He said he would bring somebody back to check what was happening. The news came, it was mica and we had to get it tested officially.

“When the engineer phoned, it was very abrupt. He just said, ‘Your house, Option One, has to come down to the bottom’. We have now applied for Stage One of the Defective Concrete Blocks Grant Scheme.

“That night, I cried all night and my wife cried all night. I did not know what to do. So then, I started my protest at the bottom of Church Brae in Fahan because it was the only way I could cope.”

The Lone Wolf from Fahan moved into his house in 2011.

It was self-build. We did it bit by bit. It was my dream house.

“We were planning, when we got older, to sell the house and whatever few pounds we made, we were going to give it to our children for a deposit for their own homes. I never thought I would have to build the same house twice.

“The [Defective Concrete Blocks Grant] scheme is very difficult. I was told the engineer would cost €5,000 but I would have to wait five or six months because the engineers were so busy. However, If I was prepared to pay €6,000, I could get it done in two months. We paid €6,000.

“They did the tests first to see whether we had mica. Once mica was discovered, they analysed the samples to see how much mica they contained and what strength our blocks were. They also did a lot of other tests. They took eight core samples.”

The emotional homeowner said the Government guidelines specified blocks should contain no more than 1% mica.

He added: “My blocks had 14% mica. According to building regulations blocks should be 7.5 Newtons. My blocks were 5.1 Newtons.
“I was shocked. I cried all night. My wife did the same but I didn’t know she cried. We were both in tears. She say she is ‘just completely lost’.

“This was her dream home. We put blood sweat and tears into it. We paid for everything for this house. We got nothing free. My wife and I and our two children love where we live.

“The reason I started my daily protest, initially in Fahan, was because I could not cope. I did not want to go on a committee as I would have found that frustrating. My only way of coping was to start protesting at the bottom of Church Brae.

“Then, after a couple of days, I met Paddy Diver and he gave me a sign. Paddy told me most of the mica houses are in Buncrana but if any signs went up, they came down very quickly. I now protest from 4pm to 6pm each day at Bridgend.

“The response has been very good. A lot of people are blowing their horns. I have been overwhelmed by the response. It was even on the Rice Bowl Derry Facebook page. I want to say thank you very much to Mr Chang.

“The response to his Facebook coverage was unbelievable. The feedback was amazing. There were one or two negative comments but that was to be expected.”

The Lone Wolf from Fahan said he would like to know who is responsible for the defective blocks.

“Everyone was aware in 2010 the blocks were not fit for purpose. But now we are hearing about cases of defective blocks after that date.

“I would like the manufacturers and the Government to explain this situation, in the local and national media.

“I would also like people in Killea, Muff and Lifford to stand from 4pm to 6pm with the signs, just to make people aware, that if you are buying a house in Donegal, it could have mica. A lot of people are not aware of the situation.

“Houses are cheap in Donegal and people think they are getting a bargain.

“However, the cracks in these houses are not normal cracks and I don’t want anybody, a mum, dad, granny or granda, to go through the pain myself and my family, and everybody in Ireland, are going though at the moment.”

The Lone Wolf from Fahan also raised the impact vulture funds would have on housing in Ireland in the future.
He said: “Vulture funds are coming into Ireland. They are getting incentives from the Irish Government.

“I want to say to the people of Ireland, wake up because you, your son, daughter, mother, father, granny, granda, will never be able to buy a house again once the vulture funds take over.

“At the minute, when someone rents a council house, they have the option after 10 years to buy that house at a discounted price, but, when the vulture funds come in, that will not happen.

“We do not want Ireland like this. We want our Government to know that the people of Ireland are not going to accept it. We should not accept it,” said the Lone Wolf from Fahan. 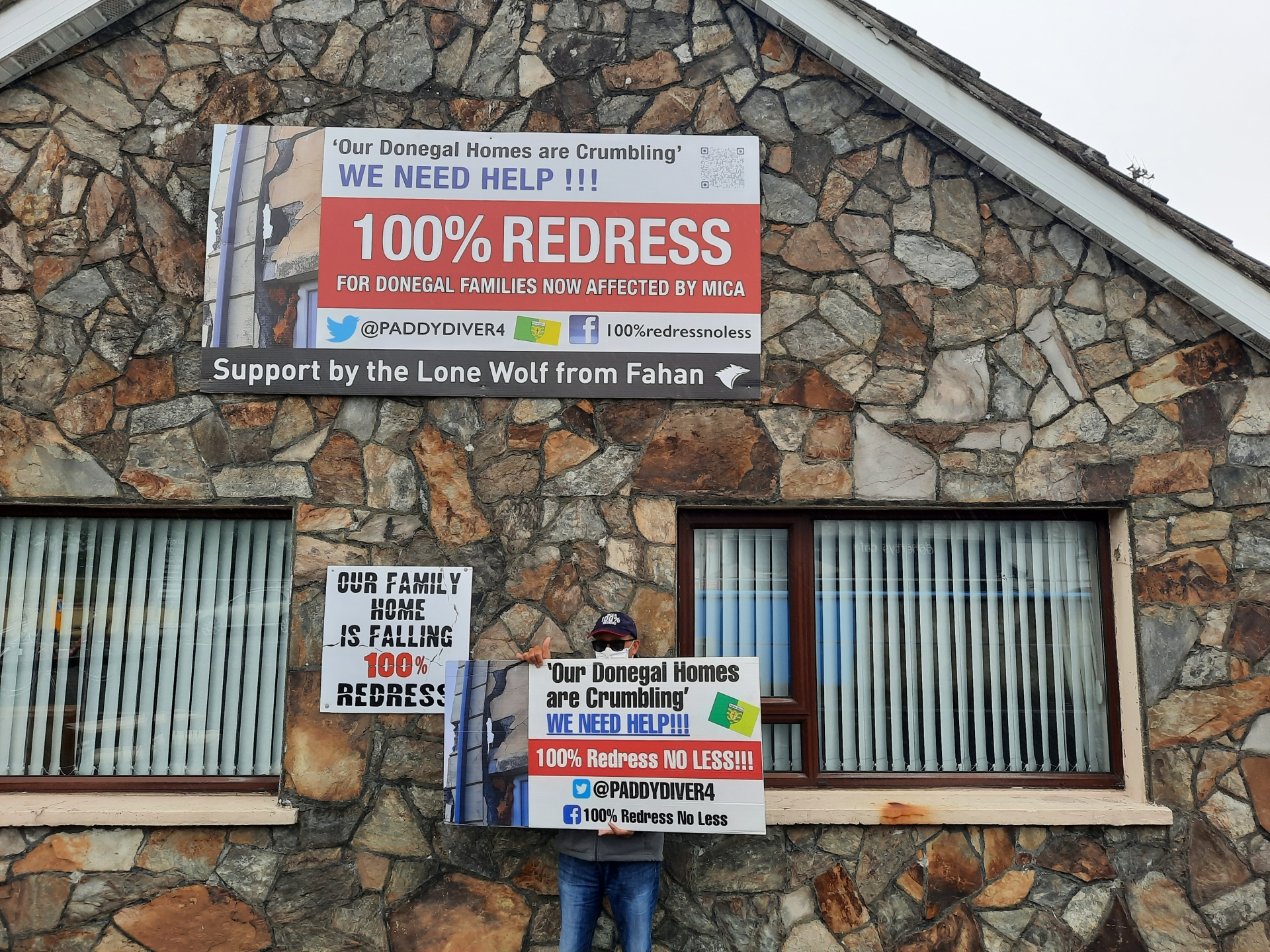