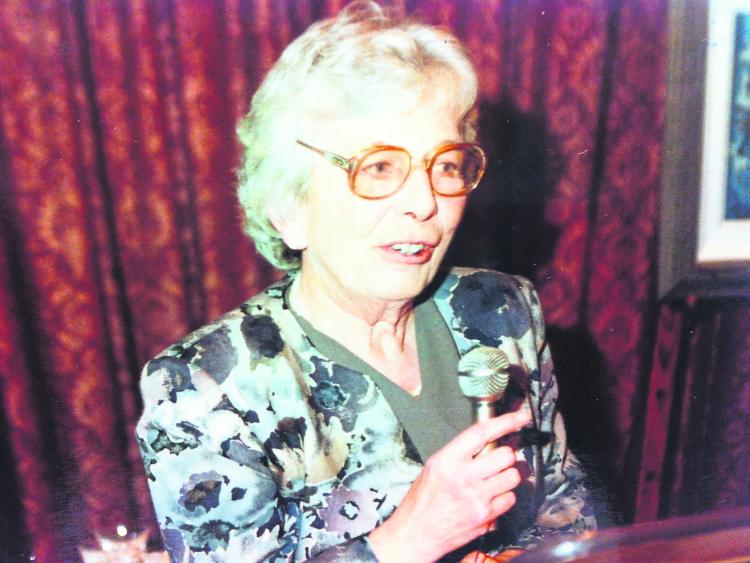 Dr Mary F Cooney, Mountcharles and Dublin, who died in Dublin on Saturday, November 12th, 2016  was one of the key people involved in the delivery of health services in County Donegal for 30 years, from 1962 to 1992.
An assistant National Director of today’s HSE and a former member of the North Western Health Board’s Regional Management Team, Tom Daly, described her as “one of the most significant people in the health service for three decades in Donegal and the north west”.
Colleague and close friend, Dr Ann Shannon, echoed that sentiment, saying Dr Cooney was “a very important person in Donegal in her role as Medical Officer for Health (MOH).”
From 1962 to 1992 she held key and high profile roles in the health service as it was in Donegal; her role as Medical Officer for Health came under the direction of Donegal County Council, but as huge change came into how the health services were organised, she completed her career as Director of Community Care, based in Ballybofey, and working for the then North Western Health Board. 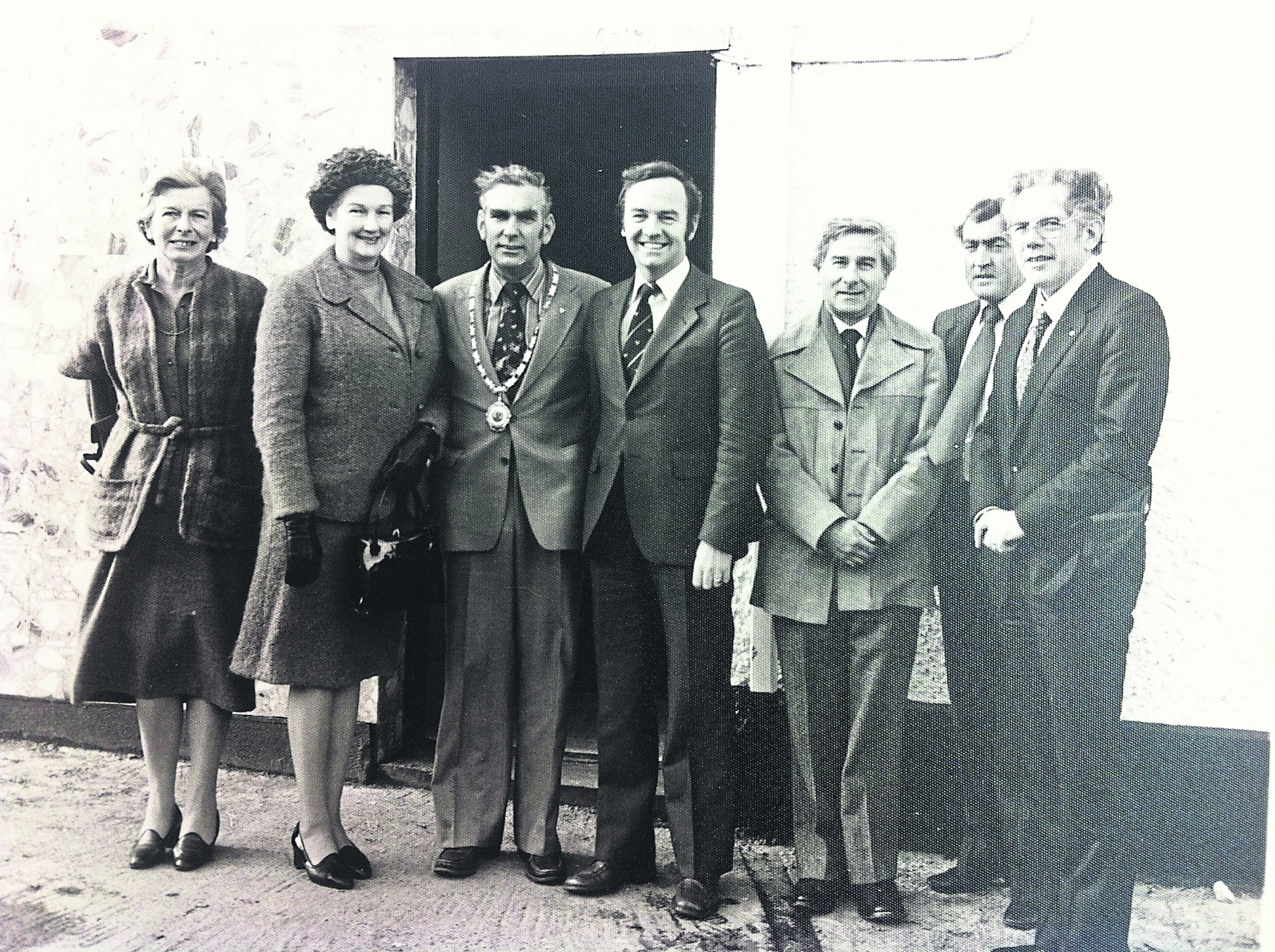 Dr Cooney loved Donegal and lived here for most of her life in Mountcharles. An innovator, a problem solver, she was also said to be very down to earth and was described as “brilliant, with a great mind, very capable and straight-forward”.
In some respects her life story is a road map offering an insight into the myriad changes and developments of health care in Donegal, the north west and nationally.
In a comment to a health board archive publication, ‘Reflecting on the North Western Health Board 1970 to 2004’, Dr Cooney said that one of the changes she noted when the service moved from the county council control to the NWHB was that the “number of officials seemed to increase”.
Originally from West Meath, she followed in the footsteps of her late father, Dr Mark Cooney, who had served as Medical Officer for Health in Cavan.
She became Assistant County Medical Officer (A/CMO) for Donegal County Council in 1962. It was her first permanent job. At that time there were four assistant county medical officers reporting to the county medical officer (CMO).
The CMO was responsible for safeguarding the health of the community, and responsibilities included:

Each A/CMO had his/her own area. “We did everything in our own area,” Dr Cooney told the NWHB legacy archivists. “We had full responsibility”. The CMO planned strategy. Community services are still planned on the same area basis today.
Working very closely with the public health nursing service, the A/CMO conducted TB clinics providing clinical care for people discharged from the sanitorium in Killybegs, in order to limit the spread of infectious diseases.
They carried out BCG vaccinations, which had first been introduced in the county in 1953. She recalled the mobile x-ray van which travelled around the county providing a miniature chest x-ray to the people in an effort to detect undiagnosed TB in the community.
Child health was a very big area. The women in Donegal were, Dr Cooney remarked to the archive publication, “very powerful - they were great women for bringing the children in for examinations and vaccinations.”
The A/CMOs also clinically assessed people for a range of disability and infectious-disease allowances and grants.

Drumbeg House
Dr Cooney, in a 2004 interview, recalled the start of services for the ‘mentally handicapped’, then the common descriptive term for people with learning disabilities. The Parents and Friends Association bought Drumbeg House in Inver, with a grant from the Department of Health, to provide care for the mentally handicapped.
The La Sagesse nuns ran it. “Until that point there had been absolutely no residential care for the mentally handicapped in Donegal,” she said. Mary sat on the Board of Drumbeg House.
Before the North Western Health Board took over there were no child psychologists. She recalled that one of the child psychologists in Galway was originally from Glenties and “he would come every while or so and do clinics for us”. Likewise in the late ‘70s a speech therapist came over and provided clinics on a Saturday.

A time of changes
The role of County Medical Officer changed when the Health Boards took over. The title changed to Director of Community Care and Medical Officer of Health. When Dr Kevin Murphy left for Dublin in the late 1970s, he was followed by Dr Pat Judge, who then moved to Wexford - shortly afterwards Mary was appointed. She held the post until she retired in 1992.
In 2004 she said her day job “as an A/CMO didn’t really change when the Health Board came in”. Life was different as DCC/MOH. The environmental health officers still reported to the Director of Community Care (DCC), providing services to Donegal County Council on an agency basis.
Similarly the public health nursing and community welfare officers came under the umbrella of the Director of Community Care.
There was an expansion in other professional staff, including social workers, psychologists, speech therapists, occupational therapists etc. She remembers there were “more officials after the Health Board came”.
As well as her many other responsibilities, Mary served a number of terms on the North Western Health Board in her capacity as DCC/MOH.
When AIDS was identified as a problem in the 1980's, she was responsible for organising information sessions for the GPs and the hospitals. She also organised the Hepatitis B campaign for Health Board staff and oversaw the organisation of Rubella programmes in schools.
Mary, herself, described the job of Director of Community Care and Medical Officer for Health as “really an office job”. It was a change for her because she had been used to getting out and about when she was Assistant County Medical Officer. Child protection was a big issue as were environmental and infectious disease problems.
In her role as DCC/MOH while each senior ran his/her own service, the services worked well together for the good of the people of Donegal. Under her direction the area medical officers co-ordinated the delivery of services for children and some adults with disabilities.
Four years after her retirement in 1992, the post of Director of Community Care and Medical Officer of Health was done away with in 1996 and replaced by a general manager. Responsibility for the health protection functions of the job were vested in the newly created post of Director of Public Health and changed from a county to a regional post.

Dr Shannon's comments
Dr Ann Shannon, now retired and formerly a Public Health Specialist with both the North Western Health Board and the HSE, who worked with Dr Cooney, described her as “hugely committed” to health services in Donegal, adding that she “dearly loved Donegal and its people”.
Dr Shannon, who succeeded Dr Cooney in a temporary capacity, said Dr Cooney had a huge interest and passion for children and adults with intellectual disabilities and this manifested itself in her voluntary commitment to those with intellectual disabilities “long after she retired”.
Dr Shannon said: “She was involved in the services for people with intellectual disabilities and she was involved with the group Parents and Friends of families with disabilities and was very helpful to some people.” Asked to expand on this she added: “She was very discreet; you never knew the half of what she did, or did for people, it was the way she was.”
Asked what kind of person Dr Cooney was, she said: “I would have seen her as a down to earth, sensible, straight-forward woman. She was very capable. She was good with people. She had a very good mind, one of the best I have ever come across. She reflected on problems.” After a brief pause, she added: “And how she loved the cryptic crossword when the day was done.”
Dr Cooney, who was 88, died at Our Lady’s Manor, Bulloch Castle, Dalkey.
She was predeceased by her sister Christine and brother Fintan and is survived by her brothers and sisters, Dr John, Pat (a former Minister for Justice), Garrett, Agnes and Gemma (Rowley), brother-in-law, sisters-in-law, nieces, nephews, relatives and friends.
Requiem Mass was celebrated on Wednesday, November 16th at the Church of Our Lady Queen of Peace, Merrion Road with interment at Mulhuddart Cemetery. The Mass was concelebrated by Fr Fergus O'Connor PP, and Fr Brendan McCann.
May she rest in peace.