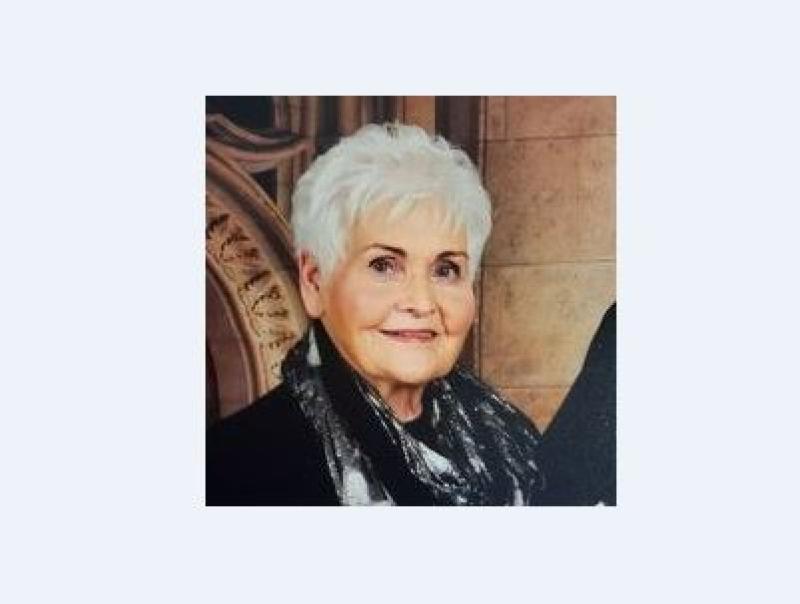 The death occurred on June 8 of one of Belleek's best-known residents, Margo McGrath, The Commons.
Margo was born in Tawnynoran, Mulleek, on March 4, 1940, the sixth child and third daughter of a family of ten to Paddy and Margaret O’Shea.
She attended Roscor PS in her early years and later the tech in Ballyshannon where she learned technical skills. Margo then worked in Stephens’ drapery shop in Ballyshannon for many years, cycling each day over seven miles each way in all weathers until she met Michael, the love of her life, who gave her a lift each day on the back of his scooter and later by car.
Margo and Michael married on October 4, 1965 in St Michael’s Church, Mulleek, settling into their happy home for life in the Commons, Belleek and soon afterwards started their family which was to be nine children, five boys and four girls.
Margo continued to work from home during all these years while raising her family, whether it be pedalling away on her Singer sewing machine to make dresses that would later be seen on the streets of Boston and New York as girls from Belleek Pottery travelled to market some of the finest Parian China in the world, to baking for many people all around the local area and beyond with her famed strawberry and cream cakes, apple tarts and many’s a wedding cake and Christmas cake all baked to perfection. Margo also minded many children over the years while their parents went out to work, becoming affectionately known as ‘Mammy McGrath’ from childhood right through to adulthood by most of those she looked after and cared for as if they were her own.

Older generation
Margo then moved from the younger generation to caring for the older generation in her community, doing home help for a number of local people to enable them to enjoy a good quality of life in their own homes. She loved shoes and enjoyed working in Mick O’Loughlin’s shoe shop and then Ann Monaghan’s
shoe shop for a number of years before ‘retirement’ when she continued to enjoy her daily visits to the town where she loved the craic in Francie’s butcher’s shop and Freeburn’s with old friends such as Maureen, often rounding off her mornings with coffee in The Thatch with friends or a nice lunch in The Lemon Tree with family.
Whenever it was time to relax, Margo loved nothing better than to go out dancing, whether it be attending ceilis or Irish Nights in St Davog’s PS or Mulleek School among many other venues over the years or attending wedding receptions or dinner dances - in fact, anywhere there was a dance locally you’d have found her dancing the night away, the first on the dance floor and the last to leave it at the end of the night, only stopping occasionally to have a sip of her glass of water to quench her thirst.

Marine Hotel
Margo also enjoyed going to bingo for many years in the Marine Hotel, Bundoran as well as other venues around the locality, a pastime that was revived on occasion in recent years with her friend Sarah.
Margo was always a great participant in a variety of activities in her local community over many years.
She regularly got involved in and organised many events in the annual Belleek Festival for many years, including tug of war and It’s a Knockout that she regularly laughed heartily at while watching on the telly with Michael and her family on Friday nights, and was one of the founding members of the Belleek Athletic Club, organising the annual race ‘round the bridges’ and reviving the Breesy Sunday traditional climb which had lapsed for many years, turning it back into a very popular,well attended annual event again.
She just loved to exercise and was always interested in leading an active life, running keep fit classes in the local community centre for a number of years and then in more recent times walking regularly around Corlea and other walking routes with her close friends Josephine and Louise.
All of this and much more while raising her family of nine children. Margo was always proud of her family and all she wanted was that they be healthy and to grow up to look after themselves.
She later became a proud grandmother to her thirteen grandchildren with whom she had a very close relationship as she cared for them and nurtured them as they grew up too.
A friend of Margo’s once commented, ‘You should be so proud, Margo - you have nine healthy children and not one of them in jail!’

Energy
Margo lived life to the full and put every ounce of energy into everything she did in life, through good times and bad, and always put others and caring for others above anything she did for herself.
She truly touched many people’s lives over many years and It is these qualities that gained her such a huge amount of love and respect throughout her own community and far beyond during a life that she loved and enjoyed to the full.
At the heart of everything throughout her life was Margo’s strong sense of faith.
She prayed daily for family and loved ones who had preceded her, including Paddy and Martin, her brothers, and had many prayers, booklets and rosaries kept in her favourite handbags and in drawers all around her home - alongside all the cards for every occasion that she always remembered without fail.
Margo took great comfort from visits by Fr Vincent Finnegan, Franciscan Friary, Rossnowlagh during her recent illness and felt truly blessed by visits from her cousin Fr Anthony at times when he was visiting home and again during her time of illness. Fr Anthony was the chief celebrant at Margo’s beautiful requiem mass on Thursday 10th June, concelebrated by Fr Vincent and Fr Beggan, ably assisted by her good friend Patsy McCauley, funeral director.
At just before 10am on June 8, 2021, Margo’s true faith, strength and belief finally led her peacefully to the ultimate destiny that she genuinely and undeniably believed in of being reunited in heaven with her true love, Michael.