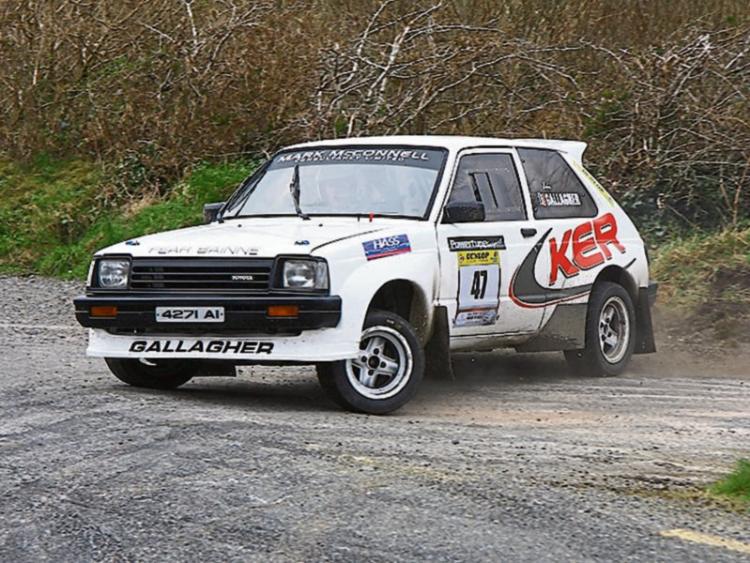 After a number of years of disappointments Declan Gallagher finished last year’s Donegal National Rally for the first time.

The Ardara man in his Starlet with James McNulty calling the notes, finished in fifth place in the modified section.

“It was good to get to the finish last year and finish fifth because we had a bit of misfortune for the previous three years, “ said Declan.

“We were forced out for the first two years with mechanical trouble. We were going well both years and then the following year we had a crash.

“So that is why it was good to get to get to the finish last year even though we had a few mishaps along the way,” said Declan, who is affectionately known as the Milkman.

“The first target realistically is to finish and if we could get into the top five or even higher would be a bonus. It is areally a tough field because all the top drivers go in Donegal.

“The pace in Donegal is serious and is 10% to 15% faster than any other rally and to keep that going for 20 stages over three days is tough going.

“It is sore on the car and the crew.”

Declan’s most recent outing was in the Circuit of Kerry in Killarney in April.

“It was good to get the opportunity to do Killarney. It was different to be out in the Escort but it went well for us.

“And we are now looking to getting out in the Starlet again; it is close on ten months since we were last out in it.”

Declan Gallagher led the National Rally after the first day last year and despite a number of mishaps was on the pace all weekend.

“It is going to be a tall order to repeat last year’s performance. There are a number of big names in there with super machines under them.”