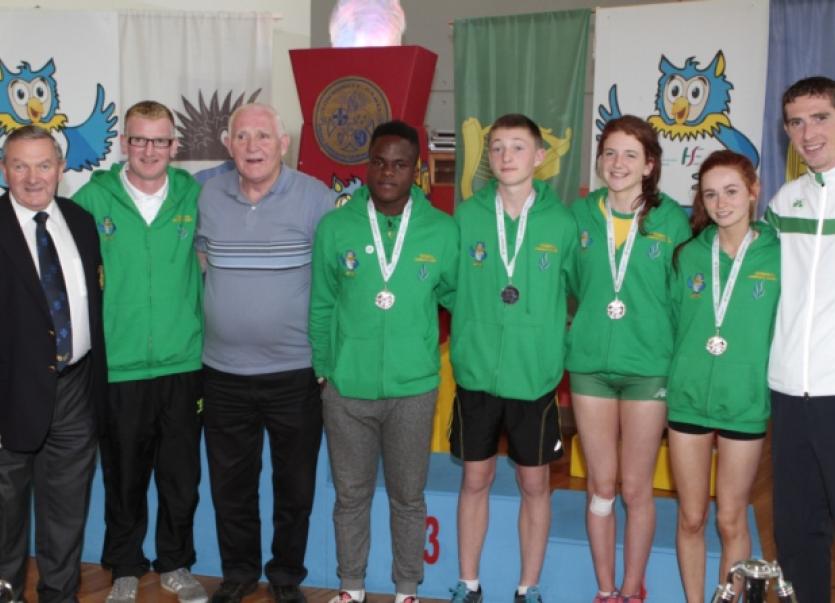 The second phase of the National Finals took place last weekend with the county having 150 competitors taking part in athletics and team events.

The second phase of the National Finals took place last weekend with the county having 150 competitors taking part in athletics and team events.

There is always a huge interest in the athletics finals were the cream of Ireland’s young runners display there talents. In the team events Ballyshannons girls U11 Basketball team won bronze, Fanads U13 girls indoor soccer team also won bronze with their girls U10 team securing fourth place medals. Letterkennys U13 hard-court tennis team having entered the competition for the first time won the silver medals.

In athletics medals did not come easy but the Donegal competitors still managed to win 9 at different levels. In the boys 60 m event Cormac Shovlin Milford won silver, the U12 ball throw a bronze medal went to Darragh Kirk Glenswilly, in the U14 long jump fourth place medal went to Finnian O’Donnell Glenswilly and in the U12 100m fourth place went Cianan Gallagher Cloughaneely.

In the girls section Sarah McGinley Glenswilly won gold in the U8 80m. In the U10 hurdles the silver medal went to Lucy McGlynn Ballyshannon, in the U8 60m the silver medal was won by Ava Fallon Bundoran, Arlene Crossan was a silver medal winner in the U16 triple jump, this was Arlene’s last year as a Community Games Competitor having won National medals in the U8, U 10, U12, U14 and U16 age groups.

Competition was strong in the relay events and all the teams gave a good account of themselves with the Letterkenny U16 mixed team winning the silver medals in a very exciting race, team members were Noah Sanni, Michael McGroary, Arlene Crossan and Saoirse Callaghan.

In the model making all the competitors were commended for their work but unfortunately no medals. In the talent section well done to Damica Donaghy Clonmany who won silver in the U14 solo dance section.

Irish Olympic walker Brendan Boyce from Milford attended the finals and assisted with the presentation of medals. Brendan, who is a former medal winner with Community Games, talked with the Donegal competitors about his experiences at international levels and his presence at the games was greatly appreciated.

The games came to a close on Sunday evening with the National Presesident, Gerry Davenport praising all the young competitors taking part and thanking the huge number of volunteers who worked tirelessly preparing the young children in the 600 areas throughout the country.

The County Managers Tony McCarry and Mary Crossan want to thank all the managers and youth members who assisted them over the weekend.