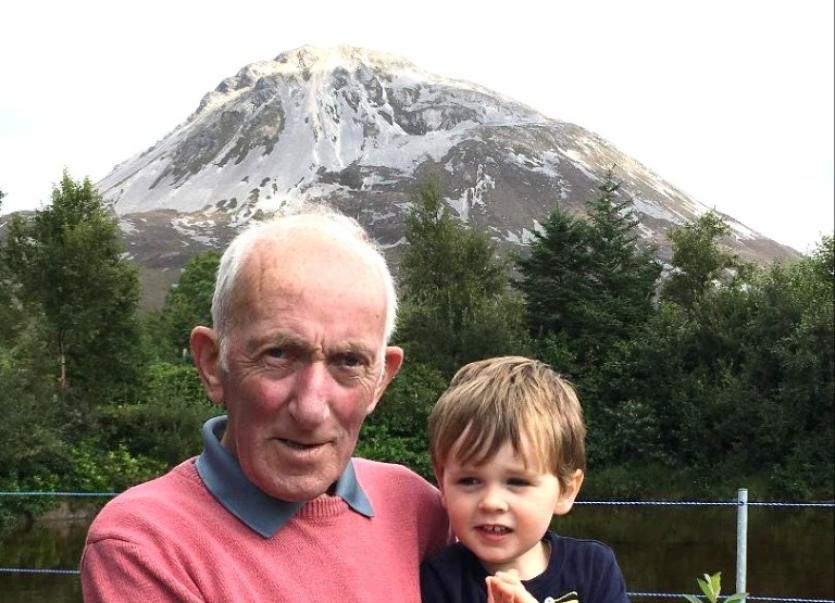 The late Neil Bonar with his grandson, Adam during a visit to Gaoth Dobhair.

Deeply regretted is the death of Neil Bonar which occurred in London on the 12th August.

He was of Gaoth Dobhair parentage, his late father was William Bonar, while his late mother, Bridget [née O’Donnel], was a native of Magheraclogher, Derrybeg.

His  parents were both born in Gaoth Dobhair , but moved to Glasgow in the late 50’s. Neily stayed behind as the eldest son and lived with his grandmother and uncles at Magheraclogher. He  would have celebrated his 70th  birthday on the 28th August. He was dreading his 70th for some time. He was always someone who made out he didn’t want a fuss made of him, but his family knew full well that he loved it. He missed out on the big party the family planned to hold in his honour.

Neily was a carpenter by trade and when not working he still built and created lots of woodwork related things. He built everything in the family home and was very artistically creative. Having lived most of his life in London it is no surprise that he was an ardent Arsenal supporter.

He was also a keen Celtic supporter. He loved his cats and had many over the years. They themselves would get a hand crafted coffin for burial made by Neily when they passed away. He was a huge animal lover. He worked all over London in the building industry as a foreman and only retired when he fell ill in February 2015.

Neily married Bernadette on January 29th 1972. They were married in Camden, London.  His wife Bernadette [née Hall]  is also from Donegal and is originally from Ballyshannon, but they met  in London in the early 70’s. They moved to Barnet in North London in the early 80’s after both their children were born.

He was always listening to Highland Radio on his Alexa and keeping up on all the news on the local newspapers website and through Facebook. He was a very, very proud son of Gaoth Dobhair. He loved visiting Gaoth Dobhair and had many friends in the area.

His funeral took place  on Tuesday September 4th in London and had a Donegal flag draped on his coffin. His daughter bought this flag for him some time ago, and it was always hung outside the window when the GAA Senior Championship was happening. It would be taken down when Donegal went out of course .

His Requiem Mass was celebrated in Our Lady of Lourdes Church, Arnos Grove, London and  his cremated remains are to be returned to his beloved Gaoth Dobhair next year for burial in Magheragallon cemetery.  A Memorial Mass for the deceased will be celebrated in St. Mary’s Church, Derrybeg on Monday 10th September at 7.00p.m.

He is survived by his wife Bernadette, son Patrick and his wife Sarra, his daughter Tara,  grand-son Adam, aged four years and who was on his first visit to Gaoth Dobhair last year (Neily loved showing him everything in the parish), three brothers Cornelius, John and Michael, sister, Margaret. Two uncles,  Edward [Ned] and Daniel O’Donnell, living  in Magheraclogher. Another brother, Patrick died as the result of an accident when he was aged only sixteen years.

Neily has a wonderful family and his siblings, nieces and nephews have been so wonderful and supportive at this sad time.