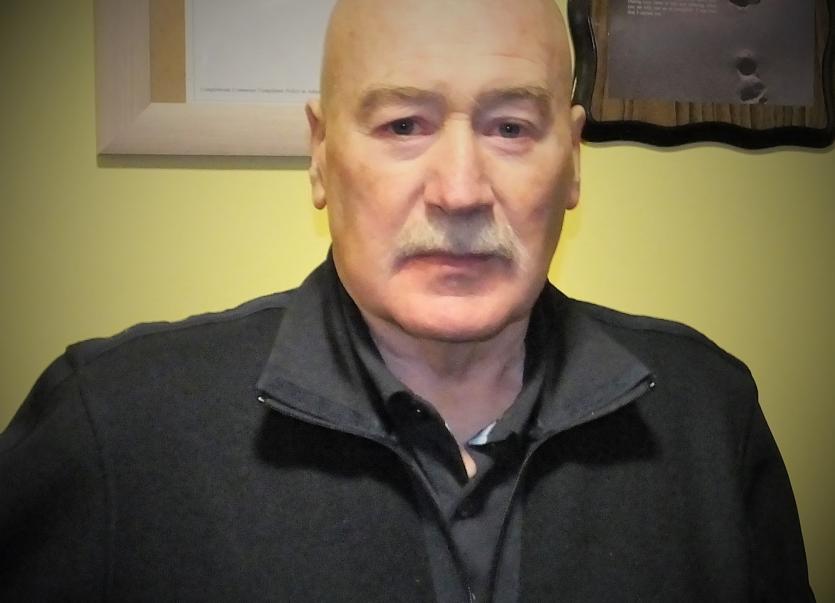 The death occurred peacefully on Thursday, February 13 after a lengthy illness of Teague [Lude]  McGinley, Magheralosk, Bunbeg.  He passed away in the loving care of the staff of Donegal Hospice, Letterkenny.

Born on Gola Island he was a son of the late Frank Éamoinn Thaidhg McGinley and Maggie Jimí Hiúdaí Shéimí [née Sweeney]. He attended the island’s national school where his sister, Síle taught.  The family moved to live on the mainland in the early 60’s and they took up residence in Cotteen, Derrybeg.  Teague continued his primary education at the nearby Derrybeg national  school and later the former secondary school, Ard Scoil Mhuire, Magheraclogher.

After his leaving certificate examination he secured employment in the tufting department of the former, G.T. Carpets Ltd., on the Gaoth Dobhair Industrial Estate.  When this company closed in 1981, he went to work in the extrusion department of former  Europlast Teorants on the estate. When this company ceased operating he worked for some time in the Gaoth Dobhair Day Care Centre at Derrybeg. He later went on to work in Áras Ghaoth Dobhair, the nursing home at Derrybeg and was working there at the onset of his illness four years ago.

He was a member of Aisteoirí Ghaoth Dobhair was a highly talented actor.  Noel Ó Gallchóir who often acted alongside him on the stage of Amharclann Ghaoth Dobhair described him as a powerful actor. He said Lude was an uniquely talented individual, light heated and funny who could play the part of either a serious or comedy role.  Noel outlined the dramas roles he had down through the years. He played the part of Tadhg the shop proprietor in the drama ‘Tadhg Soineanta’ staged by the students of Ard Scoil Mhuire in 1967. He had an acting role in the 1968 pantomime ‘Glas Gaibhleann’ staged in Amharclann Ghaoth Dobhair. He also had an acting part in the 1970 pantomime, ‘Mac Rí Uladh’.  While working in G.T. Carpets he had an acting role in the drama, ‘Ar an Taobh Amuigh’  which was staged at the National Drama Festival in Galway in 1979. He acted the part  of Nicodemus in the Passion Play ‘Shoilsigh Solas sa Dorchadas’ written by the late Tomás Mac Giolla Bhríghde and which was presented in the Amharclann in 1986, 1987 and again in 1998. He also had acting roles in other dramas staged in the amharclann down through the years.

He was a keen sports man and  a  remarkable  swimmer,  and was a founder member of the  New Year’s Day Swim at Magheragallon Strand. This fundraising charity event takes place each year and he was given the honours this year to officially start the swim. He had great interest in boxing, soccer, and was a Celtic supporter. He also had great supporter of  CLG Ghaoth Dobhair and travelled with the club and supporters to America in 1970. He also had a great affiliation with his birth place, Gola Island and recently visited there and he walked from one end to the other of the island.

His remains reposed at his home on Friday and Saturday.  His Requiem Mass was celebrated in St. Mary’s Church, Derrybeg at 1pm on Sunday.  The main celebrant of the Mass was an Dr. Ró Oirmh. Pádraig Ó Baoighill, P.P.,  Gaoth Dobhair and con- celebrants were:  Fr. Seán Ó Gallchóir, P.P., Gortahork and Fr. Joe McDermott, Newbridge [uncle of Lude’s son-in-law, Seán]. The first lesson was read by his son, Martin while his daughter, Marie read the second lesson. Family circle members read the prayers of the faithful and brought the gifts to the altar. The soloist was Eileen Sweeney and she was accompanied on the organ by Hugh Hiúdaí Beag  Gallagher and Megan Nic Fhionngháile [niece] played on the violin. After communion  Eileen Sweeney sang ‘ Céad Slán leis an Oiléan’,  a sad song about Gola Island penned  by the late Tomás Mac Giolla Bhríghde.

In his homily an Dr. Pádraig Ó Baoighill said Lude was a man of faith which was passed on to him by his parents on Gola Island and the seed of that faith never wavered.  He added that he had a great devotion to Our Lady and St. Peregrine. ‘While he worked in Árás Ghaoth Dobhair he would prepare the table for the altar every Saturday evening for the celebration of Mass.  He would also ring the bell during the mass.  He took on this role without a request from anyone. He treated everyone with respect and care and he never took a day off work’,  he said. At his funeral a guard of honour was provided by his colleagues at Árás Ghaoth Dobhair and by members of Aisteoirí Ghaoth Dobhair.  His funeral took place afterwards to Magheragallon cemetery.

He was predeceased by his infant son, Lee in 1981, also by his parents, Frank and Maggie and by his sisters, Mrs. Síle McGlinchey, ex. N.T.,  [Ballybofery]  and Miss Maureen McGinley, [Cotteen].  He is survived by his wife, Marion [née McGarvey],  daughter, Marie McDermott and her husband, Seán.  Son, Martin and his fiancée Katie, three brothers, Éamonn [Felix]  McGinley, [Carrickataskin, Derrybeg],  Jimmy [England] and Patsy [Cotteen], family circle and a wide circle of relatives and friends.