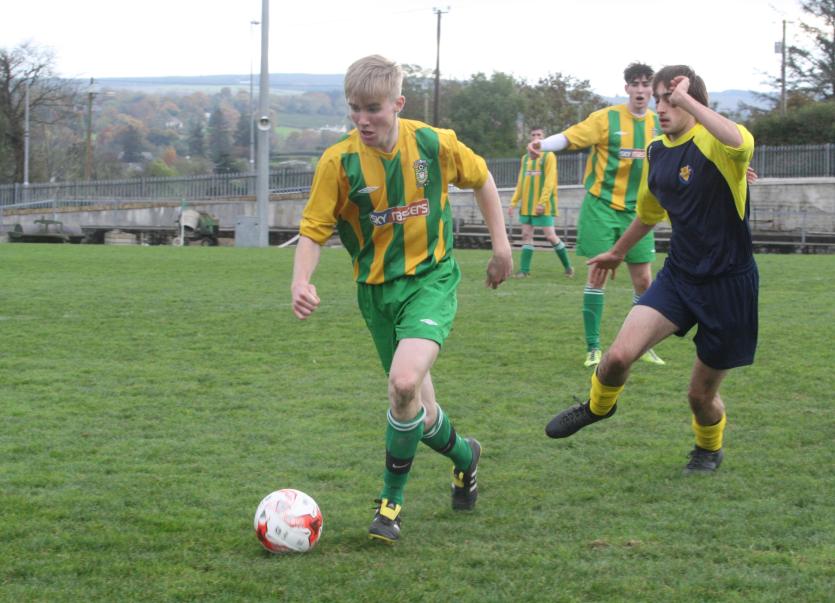 Midfielder Michael Roarty on the attack for Donegal on Saturday at the Curragh, Killygordan.

There was a dramatic end to Saturday's FAI Youth Inter-League tie at the Curragh, Killygordon as the Donegal Youth League scored a late goal to beat Monaghan/Cavan.
Donegal Youth League 1
Monaghan/Cavan 0
Eamon McConigley's side collected all three points with a goal from Fanad United's Michael Devine in the second minute of injury time
The game, played in perfect conditions in Killgordan, was a cagey affair in the opening stages with chances few and far between.
Donegal did have a few half chances from the strike-force of Cody Brogan (Letterkenny Rovers) and Michael Devine late in the first half .
Donegal came more into the game in the second period of the game and were the dominant side creating plenty of goals scoring opportunities.
But Monaghan/Cavan were always dangerous on the counter attack and were denied a goal midway through the half by a fantastic save from Fanad United's keeper Dane Dunsworth.
When it looked like the sides would go away with a point each, up popped Devine who powered home a fierce strike from 12 yards, much to the delight of the home supporters.