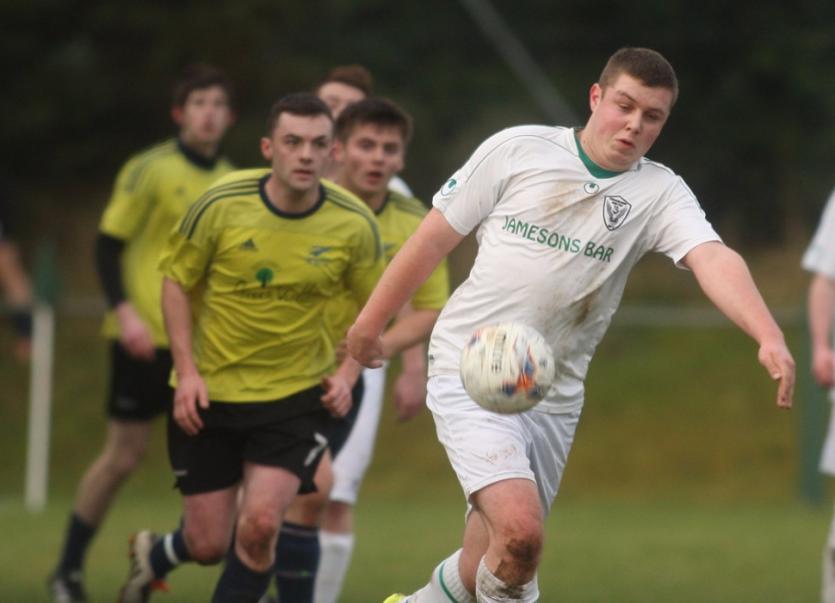 Drumkeen United . . . 1
Copany Rovers . . . 1
The south Donegal outfit looked on their way to a surprise victory when out of nothing, McNamee cracked home a spectacular 25 yard strike to earn his team a point.
Drumkeen would have been expecting to take full points from this CT Ball Division Two game, but in the end they were relieved not to have lost.
They fell behind to a Vincent Breslin goal ten minutes before half time, having had the better of the game up until then.
Copany dug in during the second half and had chances themselves to double their advantage. Thomas Given thought he had scored a second towards the end but his effort was controversially ruled out for offside.
Drumkeen had chances to equalise with McNamee and Stevie Devine both missing the target with close range headers, And when visiting keeper Stephen Doherty produced a brilliant reaction save from Lee Kennedy’s header, the points looked to be heading back through The Gap.
But two minutes into injury time, McNamee found space outside the Copany area and unleashed a brilliant drive which flew past Doherty into the top corner.
Copany might well be disappointed to have conceded a late equaliser, but given their troubles this season, they will be pretty content to have avoided another defeat.
Their goal on 35 minutes was controversial. Thomas Given met a delivery into the box only to see his header well saved by Drumkeen keeper John Rogers. Breslin followed up and while his effort looked to have been saved by Rogers on the line, referee Andrew Mullin ruled that it had crossed the line and gave the goal.
With Stephen Brady and Darren Kilpatrick excellent at the heart of their defence, Copany soaked up whatever pressure came their way.
Drumkeen, without several key players for this fixture, bossed the game in terms of possession but for all their effort, they just couldn’t make the breakthrough.
Ryan Kettle was a constant threat on the left and his deliveries from set-pieces caused no end of trouble for Copany. Lee Kennedy and Kevin Boyle also played well for the home side. But it was striker McNamee who in the end saved their bacon by conjuring up a goal that gave Drumkeen the point their dominance deserved.
DRUMKEEN UTD: John Rogers, Michael Patton, Jason Moore (Eoghan Kennedy 78), Chris Kyle, Stevie Devine, Kevin boyle, Lee Kennedy, Eunie Doherty (Ciaran Tinney 70), Peter McNamee, Kevin Bonner (Michael Guthrie 65), Ryan Kettle.
COPANY ROVERS: Stephen Doherty, Gearoid Gallagher (Eoin Rush 52), Lee Doherty, Stephen Brady, Darren Kilpatrick, MJ O’Loughlin (Dean Scally 78), Roger Leonard (Paul Patton 89), Joe McGroary, Thomas Given, Vincent Breslin, Martin McGrath.
REFEREE: Andrew Mullin.