Keith Cowan sent off early on as Harps suffer defeat 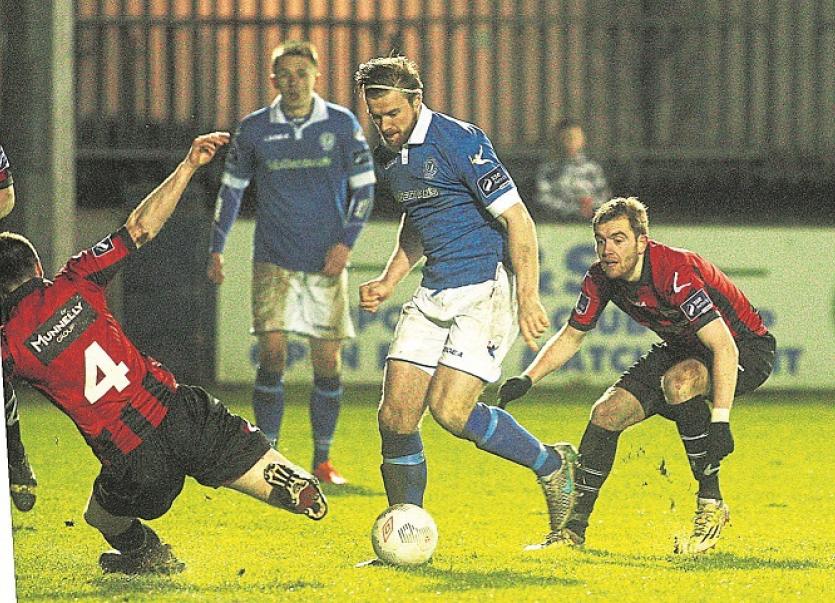 Keith Cowan who was sent off in Drogheda on Monday night.

Finn Harps fell to a first defeat of the new season as they lost out to Drogheda United in Monday night’s rescheduled game at United Park.

This game was decided in a controversial first half during which Harps had strong appeals for a penalty turned down. They also conceded a hotly disputed penalty at the other end in an incident which saw defender Keith Cowan red-carded for deliberate handball.

By half time, the ten men trailed 2-0 and they were staring into what turned out to be a first loss in four league outings.

This match was originally fixed for the opening weekend of the season but was postponed because of floodlight problems at United Park.

Harps were able to include Paddy McCourt in their side - the midfielder making an earlier than expected return from a calf injury. Lee Toland played at left back in place of Ciaran Coll while there was a debut for pre-season signing Eric Whelan.

Harps started well and they had early appeals for a penalty waved away. Thirteen minutes in, Ciaran O’Connor went down under the challenge of Mark Doyle but while there were strong claims for a penalty, they were waved away by referee, Robert Harvey.

Ten minutes later, a penalty was awarded - but unfortunately for Harps, it came at the other end.

Keith Cowan was adjudged to have handled the ball when Gareth McCaffrey had rounded the keeper only to shoot against the post. Cowan insisted the ball hit his chest, but referee Mr. Harvey not only gave the penalty, but issued a red card to the Harps man for deliberate handball.

McCaffrey, who minutes earlier had come off the bench to replace the injured Chris Lyons, beat Ciaran Gallagher from the spot.

It got worse for the ten men when Drogheda went two in front on 32 minutes. Harps failed to deal with a long clearance from the home keeper Paul Skinner and Richie Purdy took advantage, collecting possession before shooting to the net.

Just before half-time, Harps almost pulled one back but as Michael O’Connor stretched for the ball at the back post, his effort went over the bar.

Harps had assistant manager, Paul Hegarty, sent to the stands by the referee at half-time. And in the second half, as he watched from behind the visiting dug-out, Drogheda continued to press. Ciaran Kelly saw a header well saved by Gallagher following a corner.

Then Jake Hyland failed to turn home Conor Kane’s delivery as Harps were opened up again.

Former Sligo Rovers player Mark Hannon came off the bench for his first Harps appearance in the second half and in an earlier change, Adam Duffy replaced Eric Whelan at the break.

Both substitutes had chances to get on the scoresheet. Duffy was unfortunate to see his well struck effort go wide of the post.

He then set up Hannon up for a great chance on 72 minutes, but after rounding the keeper, the Harps man took a heavy touch and by the time he got his shot away, keeper Skinner had recovered to save.

The Donegal side were rewarded for their efforts deep in injury time when substitute John O’Flynn found the net. But there was no time to find an equaliser and Drogheda got the win they needed to go top of the division.

After such a decent start to the season, this result will be met with disappointment by Ollie Horgan and his team. The loss of Keith Cowan to suspension, coupled with the early season injuries in the squad, will also be reason for concern.