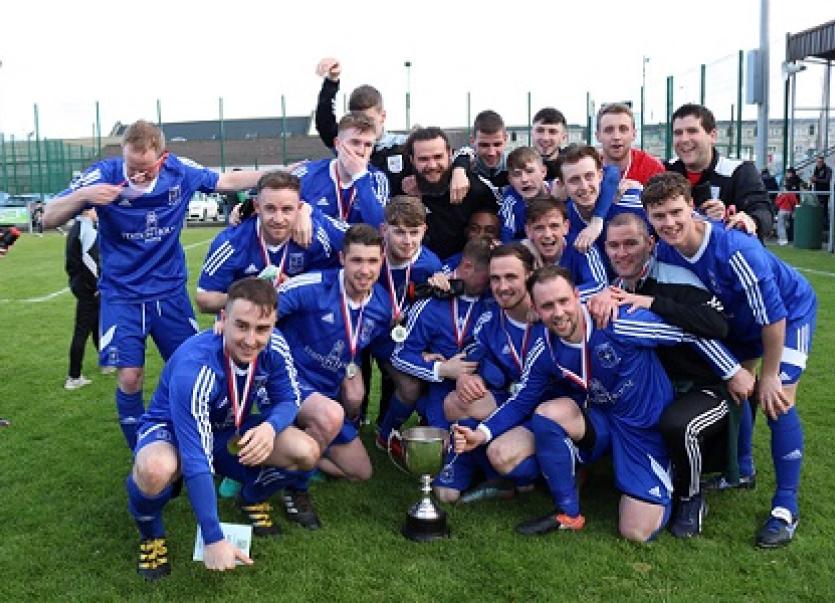 For the second season on the bounce, Letterkenny Rovers won the Knockalla Caravans Cup when they produced a quality display to see off the challenge of Cockhill Celtic at Dry Arch Park, Bonagee on Sunday evening.

Letterkenny Rovers . . . 2
Cockhill Celtic . . . 1
These two Ulster Senior League heavy-weights served up an entertaining decider with all three goals coming in a blistering opening 26 minutes.
Rovers, though, were much the better side over the 90 and while they were holding on a bit at the finish, they thoroughly deserved their win.
Cockhill’s chances weren’t helped by the dismissal of the influential Malachy McDermott on 76. The big midfielder was red carded for his part in an off the ball incident involving Rovers player Luke Nelis.
The ten men of Cockhill, to their credit, finished strong, but aside from a late opportunity which fell to Gerard McLaughlin, they just didn’t carry enough threat in front of goal.
For Rovers, it was another memorable cup victory. Without the injured Darren McElwaine and defender Conor Tourish, they were forced to reshuffle their pack.
They started well, but fell behind on 11 minutes when Gerry Gill’s corner from the left was forced home by Oisin McColgan.

Lead
Their lead last only two minutes. Rovers hit back with an equaliser when Lee McCarron could only parry Kevin McGrath’s well struck effort on goal and Declan Sharkey reacted quickest to turn the loose ball home.
Rovers, with Christy Connaghan and Chris Malseed excellent at centre midfield, were well on top, and they moved ahead on 26. Nelis got room inside the area and while his shot looked to be drifting across the face of goal, Ryan Lonergan stole in to turn the ball home at the back post.
Cockhill saw a response of their own but while Mark Moran forced a comfortable save from Rory Kelly, they rarely threatened.
In contrast, Letterkenny had some good moments in front of goal in the early stages of the second half with Sharkey squandering a good chance after being set up by Lonergan and then McColgan had to be brave to save at the feet of Lonergan inside the box.
As the half wore on, Cockhill finally began to find some rhythm. After they had penalty appeals waved away by referee Marty McGarrigle amid claims of handball, Laurence Toland broke through on goal, but under pressure from the retreating David Shovlin, Toland shot over.
Then came Malachy McDermott’s red card and suddenly Cockhill looked in real trouble.
They did their best to find an equaliser and almost did on 83 when Moran set up Gerard McLaughlin in front of goal but he just didn’t catch his shot right and Kelly was able to save.
Rovers, superbly marshalled at the back by man-of-the-match Ryan McConnell, saw the game out to ensure the Knockalla Caravans Cup silverware is staying in the Cathedral Town.